Opinion | Watch Out, America — The Supreme Court Is Back in Session - The New York Times 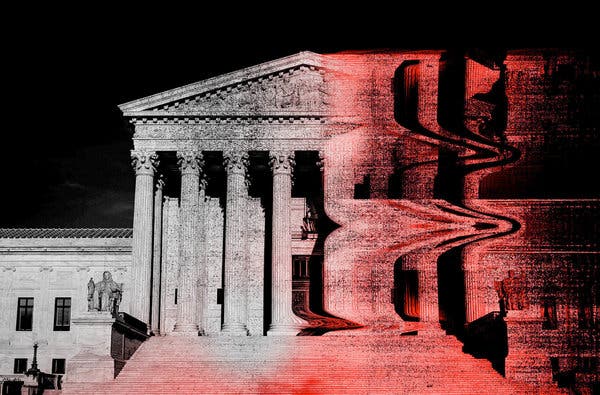 "Watch Out, America — The Supreme Court Is Back in Session

On Monday, the Supreme Court will begin hearing cases in its first complete term since the retirement of Justice Anthony Kennedy, and the confirmation of Justice Brett Kavanaugh, gave the court a newly emboldened right-wing majority.

The new term offers no shortage of opportunities for the conservative justices to block or roll back rights for certain groups — for example, women, L.G.B.T. people and undocumented immigrants brought to America as children — while bolstering rights for others, like gun owners and those who would knock down the crumbling wall between church and state.

In one of the most hotly anticipated cases, to be argued Tuesday, the justices will consider whether employers may fire employees for being gay or transgender.

The arguments will cover three separate cases — two involving gay men who said they were fired because of their sexual orientation and one involving a transgender woman who was fired after telling her employer that she was transitioning from male to female.

Such discrimination is a daily fact of life for gay, lesbian and transgender people across the country. Some states have laws barring it, but most don’t. For people in states without their own legal protections, the only hope is federal law — specifically, Title VII of the 1964 Civil Rights Act, which bars employers from firing, harassing or discriminating against an employee “because of” that person’s “sex.” The plaintiffs in these three cases argue that the plain language of Title VII applies to them, because they would not have been fired but for their sex — after all, if the gay men had been women, their attraction to men would not have been an issue for their employers.

The transgender woman before the court, Aimee Stephens, also argues that she was fired because she did not fit the stereotype of how a person assigned male at birth is expected to dress and act. This violates a 1989 Supreme Court ruling that Title VII bars discrimination on the basis of sex stereotypes.

The employers in these cases, with the backing of the Trump administration, say the civil rights law provides no protection to the plaintiffs, because when it was passed in the 1960s, no one imagined that it would apply to sexual orientation or gender identity. That’s true — many L.G.B.T. Americans were closeted at the time, and they faced severe consequences for standing up for their equality in public. But what lawmakers might have thought more than 50 years ago is irrelevant to the matter at hand, which is what the law they passed actually says.

Cases like this are why the makeup of the Supreme Court matters so much. If Justice Kennedy were still in his seat, it’s a fair bet that the plaintiffs would come out on top. Justice Kennedy wrote all of the major gay-rights opinions of the court, including Obergefell v. Hodges in 2015, which upheld a constitutional right to same-sex marriage.

Still, this should be an easy case for the conservatives, who regularly profess their allegiance to the plain language of laws. If they are nevertheless inclined to read that language narrowly, they might heed the words of their hero, Justice Antonin Scalia, who wrote the opinion for a unanimous court in 1998 that Title VII applies to cases involving harassment between members of the same sex. While Congress may not have been picturing such incidents in 1964, Justice Scalia wrote, “statutory prohibitions often go beyond the principal evil to cover reasonably comparable evils, and it is ultimately the provisions of our laws rather than the principal concerns of our legislators by which we are governed.”

This term, the court also will hear a challenge to President Trump’s decision in 2017 to reverse President Barack Obama’s 2012 executive order protecting undocumented immigrants who were brought to the United States as children — the roughly 700,000 young men and women known as Dreamers.

Mr. Obama implemented the program, Deferred Action for Childhood Arrivals, or DACA, as a way to protect some of the most vulnerable undocumented immigrants in the nation, and he did it only after Congress repeatedly failed to pass any meaningful immigration reform. Mr. Obama claimed that he was using well-established presidential discretion to decide how to enforce immigration laws and to prioritize the deportation of certain people and not others, like the Dreamers.

This put the Trump administration in a bind. On the one hand, Mr. Trump rose to power on an anti-immigrant platform, and his supporters are hungry to see him carry that out. (He’s also eager to erase every accomplishment of Mr. Obama’s.) On the other hand, the Dreamers are a sympathetic group of young people, as Mr. Trump has acknowledged, and Americans broadly support their being able to stay in the only country that many of them have ever really known.

Had Mr. Trump simply said that he was rescinding DACA because he did not think it was a wise policy, he would have been on firmer legal ground. But because he was afraid of taking responsibility for destroying the Dreamers’ lives, Mr. Trump is trying to pass the job off to the Supreme Court by arguing that DACA was an illegal exercise of authority from the start.

That’s simply wrong — not to mention suspicious coming from an administration that claims to have broad authority in other immigration contexts. It also makes the case harder for Mr. Trump at the Supreme Court because he did not adequately explain his reasoning, as is required when reversing a previous administration’s position. When the justices hear this case in November, they ought to tell the president that if he wants to kill off a popular program, he’ll need to look the American people in the eye and own it.

The way the justices handle two other high-profile cases — on guns and abortion — could reveal just how far and fast the court’s new conservative majority is willing to go to implement its vision for America.

In January, the justices agreed to hear a gun-rights case for the first time in a decade. The lawsuit is a challenge to a New York City law limiting gun owners’ ability to transport guns outside their home. With five justices who are solidly in favor of gun owners’ rights, the outcome would seem nearly preordained.

It might not be, however. After the court agreed to hear the case, New York City threw out the challenged law. Normally, this means that the case is, in legal jargon, moot: The plaintiffs got what they were asking for, so there’s no longer any dispute for a court to resolve.

But once again, court personnel matters. If Justice Kennedy were still on the bench, there’s a good chance that the court would not have taken this case at all. It’s a different story with Justice Kavanaugh, whose work as a federal appeals court judge suggests he is even more protective of the Second Amendment than was Justice Scalia, who wrote the landmark 2008 ruling that guaranteed an individual right to keep and bear arms.

Last but not least is abortion rights — in the form of the first case involving the perennial hot-button issue to reach the Supreme Court since President Trump’s two nominees were confirmed. On Friday, the justices agreed to hear a case out of Louisiana, which enacted a law in 2014 requiring that doctors who perform abortions have admitting privileges at a hospital within 30 miles of where the terminations are performed.

Wait, you might be thinking: Isn’t this the same issue the court decided just three years ago, when it struck down parts of a nearly identical law in Texas as a sham policy intended to make it much more difficult for a woman to exercise her constitutional right to choose? Yes, it is. In that 2016 case, Justice Kennedy joined the court’s four liberals to strike down parts of the Texas law. This should have been enough to keep the Louisiana case from getting anywhere near the Supreme Court. But the notoriously conservative United States Court of Appeals for the Fifth Circuit upheld the Louisiana law anyway, and for a simple reason: With Justice Kennedy gone, the anti-abortion crusaders and their sympathizers on the federal bench feel that their moment has finally arrived.

They are right. Even if the court reverses the Fifth Circuit and prevents the Louisiana law from taking effect, as it clearly should, there are now five Supreme Court justices who are hostile to women’s reproductive rights. And even though an enduring majority of Americans support keeping abortion legal, the path to overturning Roe v. Wade — the conservative movement’s single biggest target over the past half-century — is clearer than ever."

Opinion | Watch Out, America — The Supreme Court Is Back in Session - The New York Times
Posted by John H Armwood II at 1:54 PM