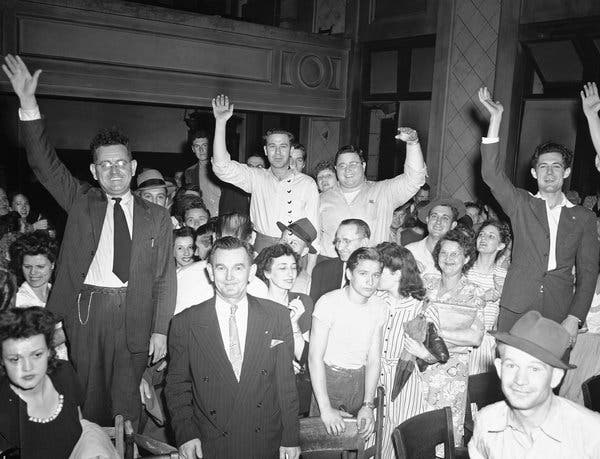 "Donald Trump is reckless with words and careless with actions. There’s no evidence that he thinks deeply about anything. Which is why I was not shocked when he condemned the House impeachment inquiry as a “lynching” earlier this week.

“So some day, if a Democrat becomes President and Republicans win the House, even by a tiny margin, they can impeach the president, without due process or fairness or any legal rights. All Republicans must remember what they are witnessing here — a lynching. But we will WIN!”

More than 4,000 African-American men, women and children were lynched — burned, beaten, drowned, shot or hanged to death — between 1877 and 1950. Trump almost certainly doesn’t know this. To a president who operates as an internet troll as much as a head of state, “lynching” is just another provocation — another way to seize the national conversation in the face of bad news and criticism. And to a man who can’t see beyond his own ego, “lynching” must feel like an apt analogy for the scrutiny of his political opponents. He can’t imagine anything worse.

Trump’s behavior didn’t shock me. What did shock me was a comment from Senator Lindsey Graham, Republican of South Carolina. When asked about the president’s “lynching” remark, Graham said the comparison was apt: “Yes, this is a lynching and in every sense this is un-American. I’ve never seen a situation in my lifetime as a lawyer where someone is accused of a major misconduct and cannot confront the accuser or call witnesses on their behalf.”

Trump is ignorant; Graham is not. In 2005, during Graham’s first Senate term, a unanimous Senate passed a resolution apologizing to lynching victims and their descendants for the chamber’s failure to enact anti-lynching legislation. It expressed “the deepest sympathies and most solemn regrets of the Senate to the descendants of the victims of lynching, the ancestors of whom were deprived of life, human dignity, and the constitutional protections accorded all citizens of the United States.” It also called on the Senate to “remember the history of lynching, to ensure that these tragedies will neither be forgotten nor repeated.”

[Join Jamelle Bouie as he shines a light on overlooked writing, culture and ideas from around the internet. For exclusive thoughts, photos and reading recommendations, sign up for his newsletter.]

The Senate likewise voted at the end of last year to make lynching a federal crime — another symbolic act of contrition. The vote, again, was unanimous. and Graham, again, was there. But even if he hadn’t been — and even if these votes had never happened — Graham should still know better. According to the Equal Justice Initiative, a nonprofit advocacy group focused on criminal and racial justice, 185 black Americans were reported lynched in South Carolina.

Graham is a native of Central, a small town in Pickens County at the northwest edge of the state. At least four of the 185 lynchings took place in the area. In 1947, eight years before Graham was born, a 24-year-old black man named Willie Earle was taken from jail — where he was held on charges of assault — and killed by a mob of white men, the last racially motivated lynching to take place in the state. A generation earlier, in 1912, a black teenager named Brooks Gordon was lynched for allegedly shooting at a white woman while she drew water from a spring. Twenty-two years before that, in 1890, Henry Johnson was killed after he was accused of rape. Another black man accused of assault — his name is lost to history — was lynched in 1891.

No, Graham did not live through this era. But his parents did, and the violence of that period marks the place he calls home. It marks the entire region and state. As a lawmaker who represents that state — who represents families and communities upended by racial terrorism past and present — Graham has a particular responsibility to that history. He owes his constituents a degree of sensitivity, an awareness of the weight of a word like “lynching.”

Graham has rejected those obligations. Instead, he’s content to affirm President Trump’s endless sense of his own victimhood. On Thursday, Graham introduced a resolution in the Senate to condemn the impeachment inquiry in the House. He will say anything to defend the president, even if it means minimizing one of the worst crimes this nation has perpetrated on its own citizens. Graham hasn’t just embraced the president, he’s embraced Trump’s total shamelessness — his absolute failure to hold himself accountable to any worthwhile standard of character.

The day before Trump and Graham made their comments, the Emmett Till Memorial Commission in Mississippi erected its fourth sign marking the spot on the Tallahatchie River where, in the summer of 1955, Till’s body was found after he was kidnapped, tortured and lynched. The three previous signs had been either stolen or vandalized and two were riddled with bullets in displays of anger and contempt. The new sign is made of steel.

The reason to condemn Trump and Graham for their “lynching” remarks is not to score a partisan point or because it will make a difference in their language or behavior. It’s because we haven’t actually resolved the trauma of the past. Historical spaces are still contested. The scars are still present."