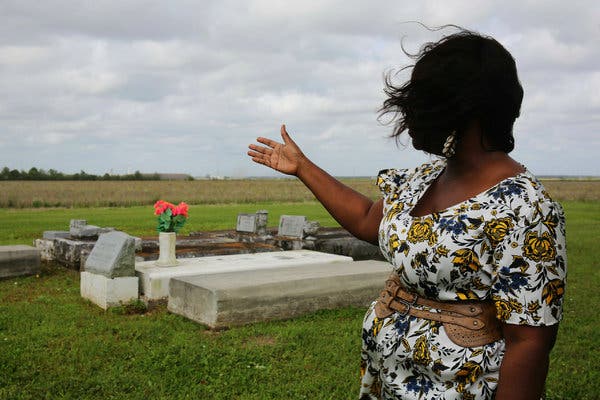 It is America’s responsibility to undo the trauma it has inflicted upon black people for hundreds of years.

Carolyn Smith, a descendant of a slave, gestures toward gravestones of other descendants of enslaved people in Houma, La.

This week, Senate Majority Leader Mitch McConnell was asked his opinion on the paying of reparations to the descendants of slavery in America, and he came down solidly on the side of “no” and on the side of being intentionally obtuse.

Here is his answer in full:

“I don’t think reparations for something that happened 150 years ago, for whom none of us currently are responsible, is a good idea. We’ve tried to deal with our original sin of slavery by fighting a civil war, by passing landmark civil rights legislation. We’ve elected an African-American president. I think we’re always a work in progress in this country, but no one currently alive was responsible for that.

Everything McConnell said was fundamentally wrong — factually and morally.

Let’s start at the beginning: Chattel slavery in America is not merely “something that happened” 150 years ago. This year happens to be the 400th anniversary of when the first enslaved African arrived on our shores, and slavery became an indescribably horrific institution that thrived for nearly 250 years.

And the unpaid, unrewarded labor of those enslaved Africans is in large part what made America an economic powerhouse, and now one of the wealthiest countries in the world. And yet, the enslaved reaped none of the benefits of the wealth they created.

Does that sound fair or right?

Here it is important to point out that reparations are not only about the institution of slavery, but also about the century of oppression, a form of semi-slavery that came in its wake through racial terror, black codes and Jim Crow.

From the very beginning, emancipation wasn’t whole. During slavery, the enslaved were not counted as fully human — they were to be counted as three-fifths of a person as set forth in the Constitution — but the Supreme Court’s horrendous decision in the Dred Scott v. Sanford case confirmed that black people were not and could not become citizens of this country.

In the introduction to what remains a jaw-dropping decision, the author writes:

“The doctrine of 1776, that all (white) men ‘are created free and equal,’ is universally accepted and made the basis of all our institutions, State and National, and the relations of citizenship — the rights of the individual — in short, the status of the dominant race, is thus defined and fixed for ever.”

Black people would not be considered citizens until the 14th Amendment was ratified in 1868, but the 13th Amendment, ratified three years earlier, the year the Civil War ended, had already left a backdoor for quasi reimposition of slavery, stating, “Neither slavery nor involuntary servitude, except as a punishment for crime whereof the party shall have been duly convicted, shall exist within the United States, or any place subject to their jurisdiction.”

That exception was just the backdoor that many in power needed, leading to further abominations, like convict leasing. As the Equal Justice Initiative has explained:

“After the Civil War, slavery persisted in the form of convict leasing, a system in which Southern states leased prisoners to private railways, mines and large plantations. While states profited, prisoners earned no pay and faced inhumane, dangerous and often deadly work conditions. Thousands of black people were forced into what authors have termed ‘slavery by another name’ until the 1930s.”

Does that sound fair or right?

When slavery ended, many slaves thought that they would receive 40 acres and a mule; instead, they got pestilence and starvation. In the eyes of America, all their labor had earned them nothing.

The Rev. Dr. Martin Luther King Jr. touched on this gross failure of America in speeches just before he died and in advance of his planned Poor People’s Campaign, saying:

“At the same time that America refused to give the Negro any land, through an act of Congress, our government was giving away millions of acres of land in the West and Midwest, which meant that it was willing to undergird its white peasants from Europe with an economic floor. But not only did they give the land, they built land grant colleges, with government money, to teach them how to farm. Not only that, they provided county agents to further their expertise in farming. Not only that, they provided low interest rates in order that they could mechanize their farms. Not only that, today many of these people are receiving millions of dollars in federal subsidies, not to farm and they are the very people telling the black man that he ought to lift himself by his own boot straps.”

“Now, when we come to Washington, in this campaign, we’re coming to get our check.”

The enslaved were freed into an epidemic of sickness and death.

The historian Jim Downs estimates that “at least one quarter of the four million former slaves got sick or died between 1862 and 1870,” as The New York Times pointed out when his book, “Sick From Freedom,” was released in 2012.

There was no medical infrastructure — or educational or financial, for that matter — to support them. The federal government said it was the states’ responsibility, and the states shirked it, saying, in part, that they had enough to handle, with thousands of wounded soldiers returning. So, the bodies fell and the tombstones sprouted.

Does any of this sound fair or right to you?

“I admit that the Negro, and especially the plantation Negro, the tiller of the soil, has made little progress from barbarism to civilization, and that he is in a deplorable condition since his emancipation. That he is worse off, in many respects, than when he was a slave, I am compelled to admit, but I contend that the fault is not his, but that of his heartless accusers. He is the victim of a cunningly devised swindle, one which paralyzes his energies, suppresses his ambition, and blasts all his hopes; and though he is nominally free he is actually a slave. I here and now denounce his so-called emancipation as a stupendous fraud — a fraud upon him, a fraud upon the world.”

During Reconstruction, not only was the Freedmen’s Bureau established, so was the Freedman’s Bank, in part because white banks wouldn’t do business with black people. After the bank had been run into the ground by mismanagement, Douglass was brought in as president to save it. But it was too late. Just three months later the bank was allowed to fail.

As the National Archives put it:

“The closure of Freedman’s Bank devastated the African-American community. An idea that began as a well-meaning experiment in philanthropy had turned into an economic nightmare for tens of thousands African Americans who had entrusted their hard-earned money to the bank. Contrary to what many of its depositors were led to believe, the bank’s assets were not protected by the federal government. Perhaps more far-reaching than the immediate lost of their tiny deposits, was the deadening effect the bank’s closure had on many of the depositors’ hopes and dreams for a brighter future. The bank’s demise left bitter feelings of betrayal, abandonment, and distrust of the American banking system that would remain in the African-American community for many years. While half of the depositors eventually received about three-fifths of the value of their accounts, others received nothing. Some depositors and their descendants spent more than thirty years petitioning Congress for reimbursement for losses.”

Was this bank not too big to fail?

Then, with the Compromise of 1877, Reconstruction itself was allowed to fail as politicians worked out a scheme to resolve the disputed election of 1876: Rutherford B. Hayes could have the presidency if the federal government finished withdrawing the troops from the South who had helped protect black interests there.

Everyone knew where this would lead, and that is precisely where it led: States across the South, where 90 percent of black people lived, began to call constitutional conventions, beginning with Mississippi in 1890, to enshrine white supremacy into the DNA of those states.

As the historian Jim Loewen has written, one delegate at the convention said: “Let’s tell the truth if it bursts the bottom of the universe. We came here to exclude the Negro. Nothing short of this will answer.”

These new constitutions laid the groundwork for another 75 years or so of legal racial oppression under Jim Crow in which black people were regularly terrorized, excluded and oppressed. And this says nothing of mass incarceration, which sprung up when Jim Crow fell.

None of this is fair or right!

For a vast majority of black people’s time in this country, they have been suffering under an oppression operating on all levels of government — local, state and federal.

And the idea that too much time has passed makes a mockery of morality. You can’t use having not done something at a better time as an argument that a later time can never be the right time.

Furthermore, this is not about individual guilt or shame but rather about collective responsibility and redemption. America needs to set its soul right.

The paying of reparations isn’t at all an outlandish idea. To the contrary, it’s an exceedingly reasonable proposition. Most of all, it’s right."