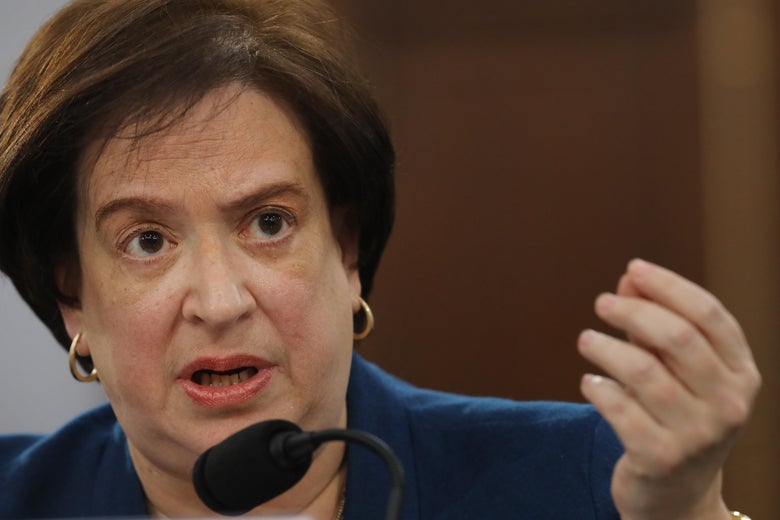 "The Supreme Court on Thursday concluded that partisan gerrymandering—the increasingly effective practice by which the party in power in a given state (most often the Republican Party) draws electoral maps to retain that power—is not an activity the judiciary can check or restrain, as it “present[s] political questions beyond the reach of the federal courts.”
While advocates for the purging of partisan gerrymandering from our democratic process will read John Roberts’ majority opinion as a sickening blow, they have found an ally in Justice Elena Kagan, who issued an impassioned dissent—joined by Justices Ruth Bader Ginsburg, Sonia Sotomayor, and Stephen Breyer—to Roberts’ ruling.
“For the first time ever, this Court refuses to remedy a constitutional violation because it thinks the task beyond judicial capabilities,” Kagan began. “And not just any constitutional violation. The partisan gerrymanders in these cases deprived citizens of the most fundamental of their constitutional rights: the rights to participate equally in the political process, to join with others to advance political beliefs, and to choose their political representatives.”
In her dissent, she wrote that partisan gerrymanders “debased and dishonored our democracy.” Kagan directed barely contained fury at the majority’s reasoning, which she stopped just short of calling cowardly and irresponsible. “The majority’s abdication comes just when courts across the country, including those below, have coalesced around manageable judicial standards to resolve partisan gerrymandering claims,” she wrote. “In giving such gerrymanders a pass from judicial review, the majority goes tragically wrong.”
Theorizing that the court’s decision came about because the justices paid “so little attention to the constitutional harms at the core,” Kagan went on to enumerate what she saw as the violations the court brushed aside: the decrease in the value of some votes, which should be protected by the 14th Amendment’s Equal Protection Clause; and the “disfavored treatment” of voters just because of their political views, in violation of the First Amendment.
“Is that how American democracy is supposed to work?” she asked.
Kagan wrote that she and the court were in agreement on the constitutional harms. “Indeed, the majority concedes (really, how could it not?) that gerrymandering is ‘incompatible with democratic principles.’ ” But that shared understanding seemed to anger her further. “And therefore what? That recognition would seem to demand a response.”
Instead, she wrote, the court’s decision hinged on the “dubious” idea that the political process can resolve the issue without the courts and on the comfort of knowing that gerrymandering is not a new issue.

The majority’s idea instead seems to be that if we have lived with partisan gerrymanders so long, we will survive.
That complacency has no cause. Yes, partisan gerrymandering goes back to the Republic’s earliest days. (As does vociferous opposition to it.) But big data and modern technology—of just the kind that the mapmakers in North Carolina and Maryland used—make today’s gerrymandering altogether different from the crude linedrawing of the past. … The effect is to make gerrymanders far more effective and durable than before, insulating politicians against all but the most titanic shifts in the political tides. These are not your grandfather’s—let alone the Framers’—gerrymanders.
What was possible with paper and pen—or even with Windows 95—doesn’t hold a candle (or an LED bulb?) to what will become possible with developments like machine learning. And someplace along this road, “we the people” become sovereign no longer.

Her dissent gets no less scathing when she returns to the court’s argument:

So the only way to understand the majority’s opinion is as follows: In the face of grievous harm to democratic governance and flagrant infringements on individuals’ rights—in the face of escalating partisan manipulation whose compatibility with this Nation’s values and law no one defends—the majority declines to provide any remedy. For the first time in this Nation’s history, the majority declares that it can do nothing about an acknowledged constitutional violation because it has searched high and low and cannot find a workable legal standard to apply.
But in throwing up its hands, the majority misses something under its nose: What it says can’t be done has been done.

Kagan concluded her dissent by admitting that it wasn’t too late for our democracy to reverse course, but that the court failed when it shrugged off its duty to help voters regain their power.

Is it conceivable that someday voters will be able to break out of that prefabricated box? Sure. But everything possible has been done to make that hard. To create a world in which power does not flow from the people because they do not choose their governors. Of all times to abandon the Court’s duty to declare the law, this was not the one. The practices challenged in these cases imperil our system of government. Part of the Court’s role in that system is to defend its foundations. None is more important than free and fair elections. With respect but deep sadness, I dissent.

Elena Kagan Wrote a Powerful Condemnation of the Court’s Gerrymandering Decision
Posted by John H Armwood II at 11:38 AM