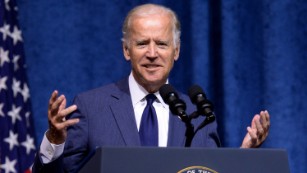 "CNN) — Joe Biden's road to a third presidential bid has been lined with a series of explanations and apologies, illustrating the challenges of preparing a long record of public service for fresh scrutiny under the spotlight of the 2020 campaign.

Yet he rarely discusses one of the earliest -- and most controversial -- issues he championed in the Senate: his fight against busing to desegregate schools. His record on the issue was at the center of the most dramatic moment of the Democratic presidential debate on Thursday, when Sen. Kamala Harris confronted him about his position, and how it impacted a little girl in California.

"That little girl was me," Harris said. "So I will tell you that on this subject, it cannot be an intellectual debate among Democrats. We have to take it seriously. We have to act swiftly."

When pushed by Harris on whether he was wrong to oppose busing, Biden shot back, "I did not oppose busing in America. What I opposed is busing ordered by the Department of Education, that's what I opposed."

Biden opposed busing more than four decades ago as a battle raged across the country -- and in Congress -- over sending white students to majority-black schools and black students to majority-white schools often far away from their own neighborhoods. Biden forcefully opposed the government's role in trying to integrate schools, saying he favored desegregation, but believed busing did not achieve equal opportunity.

In a series of never-before-published letters from Biden, which were reviewed by CNN, the strength of his opposition to busing comes into sharper focus, particularly how he followed the lead of -- and sought support from -- some of the Senate's most fervent segregationists.

"My bill strikes at the heart of the injustice of court-ordered busing. It prohibits the federal courts from disrupting our educational system in the name of the constitution where there is no evidence that the governmental officials intended to discriminate," Biden wrote to fellow senators on March 25, 1977. "I believe there is a growing sentiment in the Congress to curb unnecessary busing."

Biden, who at the time was 34 and serving his first term in the Senate, repeatedly asked for -- and received -- the support of Sen. James Eastland, a Mississippi Democrat and chairman of the Judiciary Committee and a leading symbol of Southern resistance to desegregation. Eastland frequently spoke of blacks as "an inferior race."

"Dear Mr. Chairman," Biden wrote on June 30, 1977. "I want you to know that I very much appreciate your help during this week's committee meeting in attempting to bring my anti-busing legislation to a vote."

Two weeks later, Biden followed up with a note to Eastland "to thank you again for your efforts in support of my bill to limit court ordered busing."

Biden, who would go on to lead the Judiciary Committee a decade later, got his start on the panel under Eastland. Few senators were more virulently outspoken against desegregation than the Mississippi senator, who was known for incendiary floor speeches on race.

Yet Biden invited Eastland to speak on the Senate floor in support of his anti-busing bill.

"I want to personally ask your continued support and alert you to our intentions," Biden wrote on Aug. 22, 1978. "Your participation in floor debate would be welcomed."

The letters, which are filed away in Eastland's archives at the University of Mississippi, offer a window into the robust nature of Biden's support of anti-busing bills.

While most of Biden's legislative efforts failed, he was not a passive observer like many fellow Democrats of the era, who sought to balance the anger of white constituents surrounding school busing without blocking the next step in the expansion of civil rights.

When an anti-integration amendment from North Carolina Sen. Jesse Helms failed, Biden proposed an anti-busing amendment of his own that rankled Sen. Ed Brooke, a Massachusetts Republican and the first black senator to be elected since Reconstruction.

"I have become convinced that busing is a bankrupt concept," Biden said during debate.

While Biden has built a strong civil rights record over the last four decades and spent eight years as vice president to the nation's first black president, his stand against busing as a method to desegregate schools -- which he still stands by today -- is among the chapters of a legislative record facing a second look by today's progressive Democratic Party.

Bill Russo, a spokesman for Biden, told CNN the former vice president stands by his belief that mandatory busing did not achieve equal opportunity for students or provide "real answers to problems like educational inequities," including fair housing and how school district lines were drawn.

"Joe Biden is today -- and has been for more than 40 years in public life -- one of the strongest and most powerful voices for civil rights in America," Russo said in a statement. "His long commitment to civil rights has repeatedly been recognized by many of the most important civil rights organizations in America."

While Biden supported integration during his 1972 campaign, he rarely discussed busing until many of his constituents urged him to take a forceful stand against mandatory busing in the aftermath of a court-ordered desegregation plan in Delaware.

Jason Sokol, a civil rights historian and the author of "All Eyes Are Upon Us," reviewed the letters for CNN that Biden wrote to Eastland during that tumultuous time.

"At the very least, they present further evidence to suggest that Biden was quite committed to the anti-busing cause," said Sokol, a professor at the University of New Hampshire who has extensively studied Biden's role in the anti-busing debate. "He was strongly opposed to busing and was very interested in the passage of the anti-busing legislation that he sponsored. It wasn't a half-hearted thing."

For most of the next four decades, Biden has become known as a champion of civil rights legislation like the expansion of the Voting Rights Act and changes to the Fair Housing Act. But he has rarely explained his views surrounding busing.

Ronnie Dunn, a professor at Cleveland State University and co-author of "Boycotts, Busing, & Beyond," said Biden's old views opposing busing should not be disqualifying, but warrant a broader explanation. After reviewing the letters from Biden to Eastland, Dunn said he was surprised at the degree to which Biden was soliciting support from such a known segregationist leader.

"We all evolve and grow, but we're still going to have to answer for our past records," Dunn told CNN. He said busing certainly wasn't popular among many black and white families, but he said history has shown integration to be "a necessary measure to achieve change."

While Dunn said Biden's views should be considered through the full context of nearly half-century in public life, he said he doubts Barack Obama could have reached the White House if anti-busing legislation -- like Biden's -- would have succeeded.

"If it weren't for the busing during that time period, we likely wouldn't have seen our first African American president," Dunn said. "That social interaction helped break down the structural barriers of racism."

While Biden has run for the White House twice before, his long record -- on civil rights and other matters -- will be examined in the context of a Democratic Party that has shifted to the left and become far more diverse. For the first time, an extensive conversation is underway among Democratic candidates about reparations -- or the compensation of descendants of slaves.

Biden has yet to offer his view of reparations.

Yet even before he formally declares his presidential candidacy, Biden's remarks about busing are already facing fresh scrutiny. A month ago, The Washington Post unearthed a lengthy 1975 interview Biden conducted with a Delaware newspaper, which at the time was entered into the congressional record.

As he prepares to join the presidential race at the end of this month, experience is one of Biden's biggest calling cards. It is also one of his biggest challenges, given the breadth of his public service that spans a period of historic change in the United States. He's already expressed second thoughts over the consequences of the 1994 crime bill and voiced regret about the treatment of Anita Hill during the Supreme Court confirmation hearing of Clarence Thomas in 1991.

He has repeatedly touted his progressive roots, declaring last month to a Delaware audience: "I have the most progressive record of anybody running." And last week, he said: "I was never labeled as a moderate."

Asked about those comments, he said he welcomes the ideological debate ahead.

"Everybody asks me what kind of Democrat," Biden said. "I'm an Obama-Biden Democrat, man, and I'm proud of it."

Letters from Joe Biden reveal how he sought support of segregationists in fight against busing
Posted by John H Armwood II at 4:23 PM