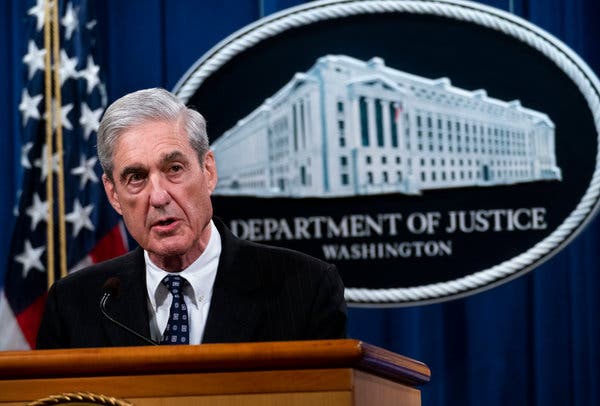 "After two years of silence, the special counsel Robert Mueller recently made his first public remarks — to complain, it seemed, that no one had read his report. “We chose those words carefully,” Mr. Mueller said, “and the work speaks for itself.”

But at a dense 440-plus pages, if the report speaks for itself, it takes a great deal of time and focus to listen to what it has to say. Mr. Mueller tells a complicated story of “multiple, systematic” efforts at Russian election interference from which the Trump campaign was eager to benefit. And he describes a president eager to shut down an investigation into his own abusive conduct. This is far from, as the president put it, “no collusion, no obstruction.”

The document is packed with even more details, ranging from the troubling to the outright damning. Yet these have been lost in the flurry of discussion around the report’s release.

Even the most attentive reader could have trouble keeping track of the report’s loose ends and dropped subplots. Here are four of the most surprising details that you might have missed — and none of them are favorable to the president.

How much did Mr. Trump personally know about Russian efforts to assist his campaign, and when did he know it? Three pages of heavily redacted text provide hints.

Rick Gates, a top adviser, said that the campaign was “planning a press strategy, a communications campaign, and messaging based on the possible release” of Hillary Clinton emails by WikiLeaks. After receiving a call during a drive to La Guardia Airport, Mr. Trump “told Gates that more releases of damaging information would be coming.” The details are redacted, and the redactions are marked “harm to ongoing matter,” perhaps related to the prosecution of Roger Stone. Mr. Mueller has alleged that Mr. Stone, a Trump affiliate, sought to obtain information about WikiLeaks’ planned release of anti-Clinton material and pass that information to the campaign.

Mr. Mueller found “insufficient evidence” to charge a criminal conspiracy between the Russian government and the campaign. But the campaign was clearly keeping a close eye on Russia-linked hacking and leaking efforts and expecting to benefit from them.

This section suggests that Mr. Trump may have been in the loop on the campaign’s efforts to get a heads-up about what WikiLeaks had planned. And that is a very long way from “no collusion.”

At a July 27, 2016, campaign rally, Mr. Trump said, “Russia, if you’re listening, I hope you’re able to find the 30,000 emails that are missing” — referring to Clinton emails reportedly stored on a personal server. “Within approximately five hours” of Mr. Trump’s remarks, according to the Mueller report, Russian military intelligence began a cyberattack against “Clinton’s personal office.”

After his July 27 comment, the report states, Mr. Trump “asked individuals affiliated with his campaign to find the deleted Clinton emails” — including Michael Flynn.

Mr. Flynn, in turn, reached out to a Republican Senate staffer and a party operative who worked separately to obtain the emails. The operative raised money to support the project, which he marketed as “coordinated with the Trump campaign,” and told others that he was in communication with Russian hackers who had access to emails he believed were Mrs. Clinton’s. But Mr. Mueller “did not establish” that the operative had actually made contact with any real Russian hackers. And while the staffer obtained emails, an effort funded by a businessman close to the campaign found that they were not really Mrs. Clinton’s either.

“Collusion” has no legal definition. But if the term means working behind the scenes with Russian actors to obtain hacked information damaging to Mrs. Clinton, then this section of the report describes just that — collusion that took place at Mr. Trump’s request. It just wasn’t successful.

Throughout his time as the Trump campaign chairman, Paul Manafort stayed in touch with a Russian man named Konstantin Kilimnik, whom, according to the Mueller report, “the F.B.I. assesses to have ties to Russian intelligence.” Mr. Gates, Mr. Manafort’s deputy, believed Mr. Kilimnik to be a “spy.” — a view, the report says, that he shared with Mr. Manafort.

While managing the campaign, Mr. Manafort told Mr. Gates to share “internal polling data” private to the campaign with Mr. Kilimnik, so he could share it with Ukrainian oligarchs and a Russian oligarch. Mr. Gates sent Mr. Kilimnik the data regularly, deleting the WhatsApp messages after he did so. In an in-person meeting with Mr. Kilimnik, Mr. Manafort shared more information about the campaign’s election plans and polling, including information about “battleground states” that would be key to Mr. Trump’s election.

Mr. Gates likewise told the special counsel that Mr. Manafort believed sharing the polling data with Mr. Kilimnik, who passed it to a Russian oligarch, Oleg Deripaska, would help resolve a financial dispute between Mr. Manafort and the Russian oligarch. The report also states that Mr. Manafort hoped his campaign work would help him recover money he was owed by the other oligarchs. Yet Mr. Mueller “could not reliably determine Manafort’s purpose” in sharing the data with Mr. Kilimnik.

This remains one of the more troubling loose ends in the report.

A month after Mr. Mueller’s appointment, President Trump’s ordered his former campaign manager Corey Lewandowski — who was not a government employee — to convey a message to Attorney General Jeff Sessions, telling him to constrain the scope of the Mueller investigation. Mr. Sessions, Mr. Trump said, was to deliver a speech restricting the investigation to only future election interference. Mr. Lewandowski never delivered the message.

Simply firing Mr. Mueller would have been within the president’s power. Asking a private citizen to deliver that message, however, moves this outside the realm of the president’s management of the executive branch and toward clearer-cut obstruction of justice. Attorney General Bill Barr’s view that the president did not obstruct justice is informed by his argument that presidential conduct authorized by the Constitution cannot constitute obstruction. But this does not address conduct, like the order to Mr. Lewandowski, that took place outside the scope of the Constitution.

“Substantial evidence,” Mr. Mueller writes, “indicates that the president’s effort to have Sessions limit the scope of the special counsel’s investigation to future election interference was intended to prevent further investigative scrutiny of the president’s and his campaign’s conduct.”

The longer one spends with the report, the more disturbing a document it is, despite the initial fuzziness of some of Mr. Mueller’s conclusions. The instances here make up only about 12 pages out of a report that spans hundreds. Mr. Mueller makes clear that the Russian government interfered in the 2016 election with the goal of supporting Mr. Trump; that the Trump campaign sought to benefit from that interference; and that the president worked to put to an end to the office investigating the interference effort. Questions remain, but the most important question is whether this conduct should be acceptable."

Opinion | 4 Disturbing Details You May Have Missed in the Mueller Report
Posted by John H Armwood II at 5:21 AM