Opinion | Why Does Trump Treat Immigrant Kids Cruelly? Because He Can - The New York Times 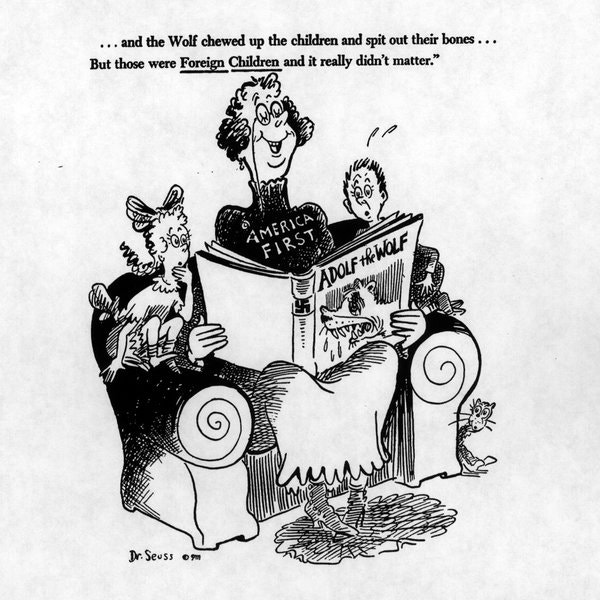 "A lifetime ago, Anne Frank’s family applied for visas to the United States to escape Hitler, but we rejected the Franks and other desperate Jewish refugees. We thought: This is Europe’s problem, not ours, and we don’t want to be overrun by “those people.”

Today President Trump is again slamming the door on desperate refugees. Indeed, the Trump administration is going a step further by wrenching children from the arms of asylum-seekers, apparently as a way of inflicting gratuitous cruelty to discourage new arrivals.

José Demar Fuentes, a 30-year-old college graduate, arrived in November with his 1-year-old son, Mateo, from El Salvador, where Fuentes was on a gang’s execution list, according to his lawyer, Noreen Barcena. Father and son entered the United States legally, presenting themselves to an immigration officer, providing birth certificates and other documentation, and requesting asylum to save their lives.

“They basically pried my client’s son from his arms and told him that he had to give up his son,” Barcena told me. “They were both crying.”

Mateo ended up in foster care in Texas for about three months and had little or no contact with his family. Even kidnappers allow more communication.

Caitlin Dickerson of The Times reported that more than 700 children have been separated from immigrant parents since October.

I sought a comment from Kirstjen Nielsen, the secretary of homeland security, but she declined to respond. Tyler Houlton, a spokesman, said Homeland Security “does not currently have a policy of separating families at the border for deterrence purposes.”

The administration notes, correctly, that some asylum-seekers bring in unrelated young children to create sympathy. Obviously, the authorities should crack down on that, but it’s increasingly clear that family separation is in part about traumatizing children so as to discourage parents from coming to the U.S.

Indeed, the White House chief of staff, John Kelly, said publicly last year that he was considering routine family separation “to deter” new arrivals. The White House later backed the plan, although it has never been announced.

Why do we tolerate a policy that is so cruel to young children? For precisely the reason Dr. Seuss identified in a 1941 cartoon, which accompanies this column. While Dr. Seuss is best known for the likes of “The Cat in the Hat,” he published this cartoon as a commentary on America’s turning away Jewish refugees trying to flee Hitler.

As Dr. Seuss wrote in the caption, “Those were Foreign Children and it didn’t really matter.”

Refugees are fleeing real terror. Consider a Honduran girl, Elena, who at age 11 was asked to be a gang leader’s “girlfriend.” One of Elena’s friends had been similarly propositioned but declined — and then Elena saw the girl stagger naked down the street after she had been raped and shot. Elena finally fled when the gang threatened to kill her entire family.

I strongly criticized Barack Obama on immigration, but the difference is that Obama’s policies were unintentionally cruel, while Trump’s are deliberately so. Trump goes out of his way to dehumanize immigrants and even complains about them “breeding.”

Fuentes’s wife eventually was able to come to the U.S. and request asylum, and this time immigration officers released her and returned Mateo to her, even as her husband is still in detention. The disparate treatment is a reflection of how random the process is.

The American Civil Liberties Union has filed a lawsuit on behalf of a different mother, one who fled violence in Congo and arrived seeking asylum with her 7-year-old daughter. Immigration authorities took the girl away from her mom, screaming and terrified.

The suit says the girl “sits all alone in a Chicago facility, frightened and traumatized, crying for her mother and not knowing when she will see her again.”

Trump has also slashed the numbers of refugees accepted for resettlement in the U.S., from a historical average of 95,000 per year. This year only about 20,000 will be resettled. As David Miliband of the International Rescue Committee noted in The Washington Post, more Syrians were killed by poison gas in Douma (at least 60) than have been admitted so far in this fiscal year (44).

I don’t believe in open borders, and immigration policy is complex and difficult. Yet Trump isn’t making hard decisions but unconscionable ones.

I am the son of a refugee myself, a beneficiary of America’s magnanimity, and today’s policies leave me ashamed. When immigration officials pry a crying young child away from a parent and send that child to foster care, that is not “immigration policy.” That is “barbarism.”

Opinion | Why Does Trump Treat Immigrant Kids Cruelly? Because He Can - The New York Times
Posted by John H Armwood II at 8:54 PM