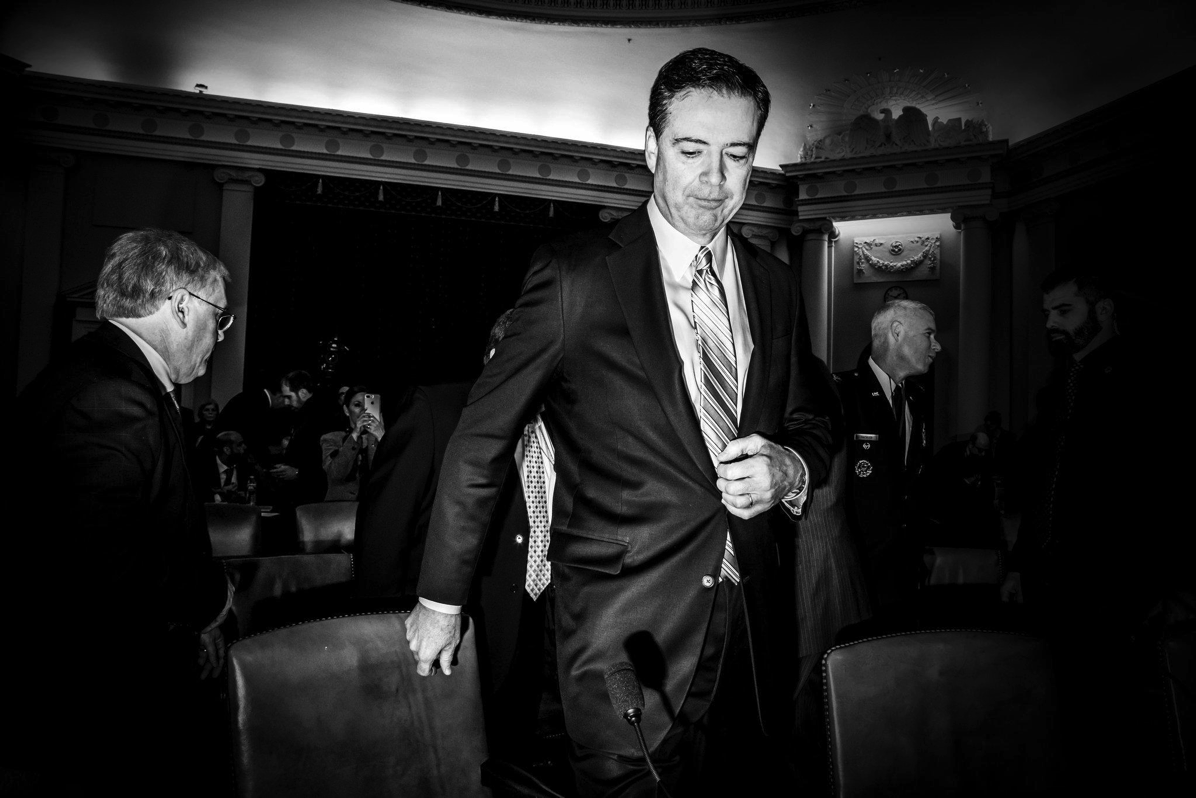 "In his absorbing new book, “A Higher Loyalty,” the former F.B.I. director James B. Comey calls the Trump presidency a “forest fire” that is doing serious damage to the country’s norms and traditions.

“This president is unethical, and untethered to truth and institutional values,” Comey writes. “His leadership is transactional, ego driven and about personal loyalty.”

Decades before he led the F.B.I.’s investigation into whether members of Trump’s campaign colluded with Russia to influence the 2016 election, Comey was a career prosecutor who helped dismantle the Gambino crime family; and he doesn’t hesitate in these pages to draw a direct analogy between the Mafia bosses he helped pack off to prison years ago and the current occupant of the Oval Office.

A February 2017 meeting in the White House with Trump and then chief of staff Reince Priebus left Comey recalling his days as a federal prosecutor facing off against the Mob: “The silent circle of assent. The boss in complete control. The loyalty oaths. The us-versus-them worldview. The lying about all things, large and small, in service to some code of loyalty that put the organization above morality and above the truth.” An earlier visit to Trump Tower in January made Comey think about the New York Mafia social clubs he knew as a Manhattan prosecutor in the 1980s and 1990s — “The Ravenite. The Palma Boys. Café Giardino.”

The central themes that Comey returns to throughout this impassioned book are the toxic consequences of lying; and the corrosive effects of choosing loyalty to an individual over truth and the rule of law. Dishonesty, he writes, was central “to the entire enterprise of organized crime on both sides of the Atlantic,” and so, too, were bullying, peer pressure and groupthink — repellent traits shared by Trump and company, he suggests, and now infecting our culture.

“We are experiencing a dangerous time in our country,” Comey writes, “with a political environment where basic facts are disputed, fundamental truth is questioned, lying is normalized and unethical behavior is ignored, excused or rewarded.”

“A Higher Loyalty” is the first big memoir by a key player in the alarming melodrama that is the Trump administration. Comey, who was abruptly fired by President Trump on May 9, 2017, has worked in three administrations, and his book underscores just how outside presidential norms Trump’s behavior has been — how ignorant he is about his basic duties as president, and how willfully he has flouted the checks and balances that safeguard our democracy, including the essential independence of the judiciary and law enforcement. Comey’s book fleshes out the testimony he gave before the Senate Intelligence Committee in June 2017 with considerable emotional detail, and it showcases its author’s gift for narrative — a skill he clearly honed during his days as United States attorney for the Southern District of New York.

The volume offers little in the way of hard news revelations about investigations by the F.B.I. or the special counsel Robert S. Mueller III (not unexpectedly, given that such investigations are ongoing and involve classified material), and it lacks the rigorous legal analysis that made Jack Goldsmith’s 2007 book “The Terror Presidency” so incisive about larger dynamics within the Bush administration.

What “A Higher Loyalty” does give readers are some near-cinematic accounts of what Comey was thinking when, as he’s previously said, Trump demanded loyalty from him during a one-on-one dinner at the White House; when Trump pressured him to let go of the investigation into his former national security adviser Michael T. Flynn; and when the president asked what Comey could do to “lift the cloud” of the Russia investigation.
There are some methodical explanations in these pages of the reasoning behind the momentous decisions Comey made regarding Hillary Clinton’s emails during the 2016 campaign — explanations that attest to his nonpartisan and well-intentioned efforts to protect the independence of the F.B.I., but that will leave at least some readers still questioning the judgment calls he made, including the different approaches he took in handling the bureau’s investigation into Clinton (which was made public) and its investigation into the Trump campaign (which was handled with traditional F.B.I. secrecy)….