Revealed: Georgia Republicans use power of state to suppress minority vote | US news | The Guardian 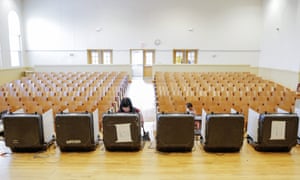 "Top Georgia Republicans continue to use the power of the state to investigate political rivals, executing a strategy that voting rights activists say is designed to intimidate voting rights organizations and activists serving minority communities.

Brad Raffensperger, the secretary of state, and David Emadi, executive secretary of the Georgia Government Transparency and Campaign Finance Commission, are investigating and issuing subpoenas to political opponents, without publicly showing evidence there was wrongdoing by those parties.

Georgia’s governor, Brian Kemp, pioneered the tactic as secretary of state, where he used his authority to investigate political opponents, liberal political groups and get out the vote (GOTV) organizers working in racial minority communities.

To date, none of the investigations, subpoenas, arrests or prosecutions against political opponents and minority GOTV organizers have led to convictions, meaning that Kemp’s – and now Raffensperger and Emadi’s – political rivals remain innocent of charges brought against them.

But voting rights activists say there is a trend in Georgia of Republicans using the power of an elected office to investigate political opponents as a voter intimidation tactic.

Voter intimidation has changed its nature since the billy club and water hose violence of the 1960s, according to Carol Anderson, a historian studying public policy and race at Emory University.

Because voter intimidation is no longer exercised through violence, and is instead exercised through subpoenas and investigations, Anderson argues the practice does not register as strongly with the public. Voter intimidation by the state, however, remains closely tied to race. In today’s politics, race and party are almost indistinguishable, Anderson said, blurring the lines between what is politically or racially motivated.

The governor’s and secretary of state’s offices have not responded to requests for comment.

Emadi issued subpoenas seeking banking and financial records. The subpoenas also seek extensive communications between the campaign and a network of political groups that are run by or are focused on people of color, which has sparked accusations of racial and political motivations behind the investigation.

Emadi has denied any racial or political motivations.

The Guardian obtained communications between attorneys for the campaign and Emadi which show that the commission did not provide any evidence of their allegations, or the “basis for the finding of probable cause”, as required in the commission rules.

Emadi said he could not comment on open investigations.

In 2019, Raffensperger opened an investigation into an alleged 4,700 missing absentee ballot requests in DeKalb county, coming from voters the Abrams campaign targeted, from November’s midterm elections. Using absentee ballots as a way to increase voter turnout among unlikely or first-time voters was a primary strategy of the Abrams campaign, which led to Abrams outperforming Kemp in mail-in ballots by 53,709 votes.

One of the first calls from investigators was to the mail-processing vendor the Abrams campaign used, according to Lauren Groh-Wargo, Abrams’ former campaign manager. She now runs Fair Fight, an organization started by Abrams to challenge current voting laws and procedures in Georgia.

The investigation remains open, with no conclusion as to what happened to the ballot applications.

Opening investigations against Democratic candidates, the state Democratic party or liberal political groups that report issues to the secretary of state’s office, only to have the mechanism of the state turned against them, has become a political trend in Georgia.

These types of investigations could have a chilling effect on people or groups interested in organizing in their communities.

“If you’re going to open up a shop organizing Latinos or Asian Americans or whatever the group may be, you need to be prepared in Georgia for the power of the state to come down on you and your folks,” Groh-Wargo said. “Your folks need to be ready that they could be literally criminalized for this type of activity, and that you need to have lawyers on the ready.”

The power of opening investigations and keeping them open for years has a big impact, Groh-Wargo said.

It shuts the work of organizers down – which has not yet happened due to any of the investigations – and shuts the funding of the organization down. It is more difficult, Groh-Wargo said, to raise money when your organization is being investigated for a crime.

“To show that there is actually no wrongdoing is an incredible burden for an organization to have to manage a board through that, or for the board to have to explain it to its funders,” Groh-Wargo said.

Raffensperger’s office is also exercising the power of the subpoena. Secretary of state lawyers used a federal lawsuit challenging the constitutionality of Georgia’s election system to issue subpoenas for extensive financial and communication records from a number of left-leaning civil rights groups and churches – when none of those organizations are party to the case.

Responding to the subpoenas will cost each organization time and thousands of dollars.

The most extreme example of an investigation on false pretenses came on 4 November 2018, two days before the midterm election. The secretary of state’s office knowingly falsely accused the Democratic party of Georgia of attempting to hack the election. The initial round of media coverage reflected the accusation, before the facts were available that the accusation was fabricated.

“That was weaponizing and using the office of the secretary of state to accuse the political party,” said Sara Ghazal, the voter protection director for the Democratic party of Georgia.

The Guardian interviewed voter registration organizers in Asian American and black communities, and leaders from Fair Fight and the Democratic party of Georgia. Each independently asserted the investigations were politically motivated.

“These weaponized investigations are used to change the entire political narrative, not only around political campaigns and individuals, but around issues,” Ghazal said. “Voter protection, voter integrity, election integrity, should never be a political issue. And yet, you’ve got debates now that are wholly politicized.”

That investigation into the Democratic party of Georgia has not concluded. No officials have been questioned or related subpoenas issued. Like each of the others, it has yet to produce any prosecutions, additional evidence, or convictions.

Ghazal runs the largest voter protection project in the country and has records of tens of thousands of voter complaints over the last couple years.

Given the recent history of investigations being turned against political opponents, Ghazal is purposely avoiding the secretary of state’s office for fear of “inadvertently giving them something else that can be weaponized against an individual voter or against the party”.

Revealed: Georgia Republicans use power of state to suppress minority vote | US news | The Guardian
Posted by John H Armwood II at 8:26 AM