Opinion | Trump to Miners, Loggers and Drillers: This Land Is Your Land - The New York Times 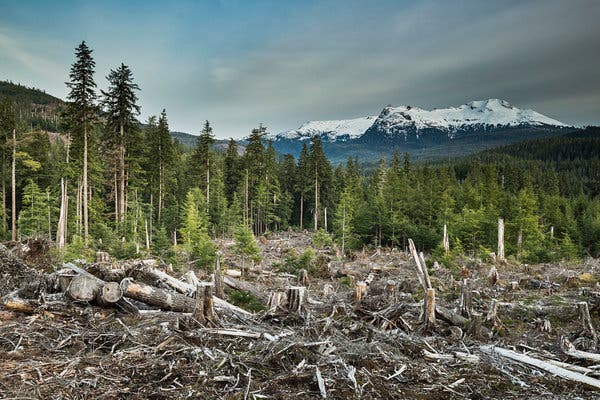 The tug-of-war over America’s public lands between those who would protect them for future generations and those who would exploit them for immediate commercial gain has a long history. The two Roosevelts, Richard Nixon, Jimmy Carter and Bill Clinton were mostly sympathetic to the cause of conservation, Ronald Reagan and the second George Bush decidedly less so. But for sheer hostility to environmental values, Donald Trump has no equal.

Mr. Trump arrived in the White House with little interest in conservation, his idea of nature framed largely by his golf courses. He was, to boot, almost pathologically dedicated to obliterating anything President Obama had done to reduce global warming gases, preserve open space and help endangered species.

This translated into a simple operating strategy: Get rid of things the fossil fuel industry didn’t like and rubber-stamp the stuff it wanted.

Hence the rollback of Obama rules limiting power plant emissions of greenhouse gases, and the proposed rollback of regulations governing methane, a powerful global warming gas. (Next up, it seems certain, is the reversal of Obama rules mandating more fuel-efficient vehicles.)

Hence also the gifts over the last two years to mining and oil and gas interests of vast areas previously shielded from exploration — two national monuments in Utah, millions of acres reserved for the threatened sage grouse, much of the outer continental shelf and the long-protected coastal plain of the Arctic National Wildlife Refuge.

That’s not all. In the shadow of these big ticket items, Mr. Trump has presided over several less visible travesties. We offer three. One is his push to open the Tongass National Forest in Alaska to logging. The others are his efforts to revive two potentially destructive mining projects — one near Alaska’s Bristol Bay, the other near the Boundary Waters Canoe Area Wilderness in Minnesota.

In all three cases, Mr. Trump has breathed new life into bad ideas thought to be dead and buried or getting there. Together they demonstrate again how Mr. Trump, when faced with a choice between commerce and conservation, reflexively sides with the former, even when the economic case for conservation is strong.

Just before leaving office, Bill Clinton signed off on one of his most important conservation initiatives. Known as the Roadless Rule, it effectively barred logging, mining and other commercial development on 58.5 million acres of national forests across the country. Included in that rule was more than half of Alaska’s 16.7 million acre Tongass National Forest, 9.5 million acres, meaning that just about all the forest would henceforth be protected, since Congress had already designated about 5.7 million acres as permanent wilderness.

Spread across an archipelago encompassing most of southeastern Alaska, the Tongass includes magnificent stands of old-growth trees and is home to a rich variety of wildlife, including grizzlies and salmon. All this would now be protected. Alaska’s politicians were not thrilled, joining with the George W. Bush administration in endless court challenges, ultimately to no avail.

Recently, however, the Forest Service has been working on a new roadless rule, specific to the Tongass, that could permit more logging. That’s bad, but not bad enough for Mr. Trump. The Washington Post reported on Tuesday that the president has ordered Agriculture Secretary Sonny Perdue, who oversees the Forest Service, to draw up a plan that would wipe out protections for all of the 9.5 million acres of roadless forest protected nearly 20 years ago.

It is not clear why Mr. Trump is doing this, apart from wanting to make Alaska’s Republican leaders happy. The economic gains would be uncertain at best; the timber industry has been in steep decline for years, whereas renewed large-scale logging would inflict damage on two big moneymakers, tourism and the seafood industry. The Tongass is the spawning ground for about 40 percent of the wild salmon that populate the West Coast. At the end of the day the biggest loss may be the trees themselves and all the good things they do, which include storing and absorbing carbon dioxide, a major cause of global warming. Which, as we know, is the last thing on the president’s mind.

In 2010, the Obama administration restricted oil drilling in Alaska’s Bristol Bay, America’s richest salmon fishery and the heart of a multibillion dollar regional fishing industry. Yet one huge threat to this extraordinary ecosystem remained: a proposed gold and copper operation known as the Pebble Mine that its backers claimed would add 1,000 jobs to Alaska’s economy while unearthing $300 billion worth of gold, copper and molybdenum. Opponents worried that the mine and its discharges could poison the headwaters of Bristol Bay, a threat to which the people of Alaska were not insensitive. In 2008, they came very close to blocking the project in a referendum that drew support from three former governors, including two Republicans, and the then-dean of the congressional delegation, Senator Ted Stevens. Industry spent $12 million advertising the mine’s purported economic benefits; that, plus a last-minute pro-mining push by Gov. Sarah Palin, turned the tide in its favor.

The Obama Environmental Protection Agency had its doubts, and in 2011 began a series of studies. The preliminary findings were worrisome: Building a big operation like Pebble would destroy streams and wetlands, but the biggest threat was the catastrophic failure of the huge man-made reservoirs known as “tailing ponds” where mining companies typically store toxic acids, metals and other mining wastes. If those were breached somehow, spawning streams would be widely polluted. Subsequent studies did nothing to diminish those fears, and in 2014, Gina McCarthy, then administrator of the agency, said that “extensive scientific study has given us ample reason to believe that the Pebble Mine would likely have significant and irreversible negative impacts on the Bristol Bay watershed and its abundant salmon fisheries.”

This did not block the mine, because the company had not filed for a permit to build one. What it amounted to was a determination that the agency would very likely say no if the company insisted in going forward. Late last month, however, Mr. Trump’s E.P.A. threw the project a lifeline. It withdrew Ms. McCarthy’s proposed determination, in effect removing any threat of a veto. This caused the stock of Northern Dynasty Minerals, the mining company, to soar. The project still faces headwinds in Congress, and needs a permit from the Army Corps of Engineers. But for the moment it has the presidential endorsement it needed.

As in Alaska, tailing ponds that hold mining wastes are at the center of a fierce dispute in Minnesota over a proposed copper and nickel mine that would be built on national forest lands adjacent to the Boundary Waters Canoe Area Wilderness, a spectacular wilderness of more than a million acres and more than a thousand lakes. And as in Alaska, the mining company says the project would provide badly-needed jobs in a depressed area, and that pollution risks are minimal. Also as in Alaska, the environmental community is terrified that leakage from the tailing ponds would poison streams that flow into the Boundary Waters. Walter Mondale, the former vice president and senator, in a Times Op-Ed piece three years ago, called such an outcome “catastrophic.”

The campaign to stop the mine found a sympathetic ear in the Obama administration’s Interior Department, which decided not to renew two expired leases held by a Chilean-owned company, Twin Metals Minnesota. It did so after the Forest Service, which also has a say in the matter, concluded that the mine posed a serious risk to the wilderness. But then came another lifeline. In 2018, Mr. Trump’s Interior Department reinstated the leases, while Mr. Perdue, at the Forest Service, abruptly canceled what he had promised would be an exhaustive study of the perils of mining on federal lands next to Boundary Waters.

What had happened? The usual. As Steve Eder and Hiroko Tabuchi recounted in The Times on June 25, the Chilean mining conglomerate mounted a major lobbying campaign with senior administration officials, including the White House’s top energy adviser. The Times also reported that Ivanka Trump and Jared Kushner had rented a house in Washington belonging to Andrónico Luksic, the billionaire whose family controls the company. This may not have hurt the conglomerate’s cause. On June 20, Mr. Trump flew to a “Make America Great Again” rally in Duluth to announce that a new day had dawned, that America’s “rich natural resources,” which the Obama administration had “put under lock and key, ” would be set free — including the mineral deposits next to Boundary Waters.

The mining project still has a long way to go. The company has yet to file a detailed plan, which must then face multiple environmental reviews. This could take years — plenty of time, one hopes, for a different vision of America’s “rich natural resources” to seize the day."

Opinion | Trump to Miners, Loggers and Drillers: This Land Is Your Land - The New York Times
Posted by John H Armwood II at 12:11 PM