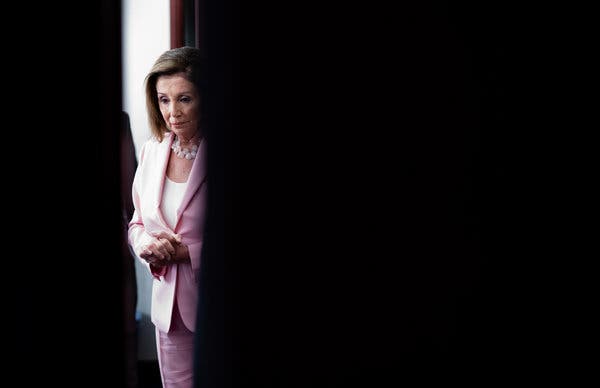 
"Elizabeth Warren on Friday evening sent out a series of tweets that, in addition to calling out Donald Trump for his criminality, rebuked Congress for enabling him. “After the Mueller report, Congress had a duty to begin impeachment,” wrote Warren. “By failing to act, Congress is complicit in Trump’s latest attempt to solicit foreign interference to aid him in U.S. elections. Do your constitutional duty and impeach the president.”
Warren was not impolitic enough to refer directly to the speaker of the House, Nancy Pelosi, but the implicit criticism was clear. It was also well deserved. Pelosi’s calculated timidity on impeachment is emboldening Trump, demoralizing progressives, and failing the country.
The House speaker is a master legislator, and by all accounts incomparable at corralling votes. But right now, Democrats need a brawler willing to use every tool at her disposal to stop America’s descent into autocracy, and Pelosi has so far refused to rise to the occasion. As Representative Jared Huffman tweeted, “We are verging on tragic fecklessness.”
Part of Pelosi’s rationale for not impeaching after the release of the Mueller report was that such a move didn’t have majority support in the country or bipartisan support in Congress. Her allies worried that were Trump to be impeached in the House but not convicted in the Senate, he could emerge stronger than ever. Many Democrats in swing districts wanted to steer clear.
These were reasonable concerns, but inaction signaled to Trump that he would face no consequences for obstructing justice or for seeking a foreign power’s help in undermining a political opponent.
[Listen to “The Argument” podcast every Thursday morning, with Ross Douthat, Michelle Goldberg and David Leonhardt.]
Now Trump has used the power of the presidency to do just that. We don’t yet know all the details in the whistle-blower report filed by a member of the intelligence community, which is now being kept, possibly illegally, from Congress. But there’s little question that the president tried to pressure the government of Ukraine to investigate Joe Biden and his son, Hunter Biden; both Trump and his ranting disgrace of a lawyer, Rudy Giuliani, have admitted as much on television.
The idea was to try to force Ukraine to provide grist for a thoroughly debunked right-wing conspiracy theory that as vice president, Biden targeted a Ukrainian prosecutor on his son’s behalf. While Trump was strong-arming the reformist Ukrainian president Volodymyr Zelensky, his administration had frozen $250 million in security aid that the country desperately needed to defend itself against Russia, which invaded in 2014. It doesn’t matter if there was an explicit quid pro quo; Zelensky knew what Trump wanted from him. Trump deployed American foreign policy to extort a vulnerable nation to help his re-election campaign.
Trump’s latest defilement of his oath of office has pushed some previously reluctant Democrats, like the House Intelligence chairman Adam Schiff, toward impeachment. Schiff reportedly coordinated his recent pro-impeachment comments with Pelosi, yet she remains resistant to moving in the same direction. One of Pelosi’s advisers told the CNBC reporter John Harwood that her impeachment calculus hasn’t changed, saying, “See any G.O.P. votes for it?” It was almost as if the adviser was trying to troll scared, desperate Democrats, rubbing their faces in the speaker’s baffling determination to give Trump’s party veto power over accountability.
The most Pelosi has done is to write that if the whistle-blower’s complaint is kept from Congress, the administration “will be entering a grave new chapter of lawlessness which will take us into a whole new stage of investigation.” Given the impunity Trump has enjoyed so far, this does not seem like a threat with teeth.
Ultimately, no one can know the political consequences of impeachment in advance. I find it hard to imagine how months of televised hearings into a widely hated president’s comprehensive corruption could help him, but I can’t see the future. Perhaps impeachment in the House without removal in the Senate would allow Trump to convince some voters he’s been exonerated, though so does the failure to impeach him at all.
Polls show that impeachment doesn’t have majority support, so there’s a political risk for Democrats in trying to lead public opinion rather than follow it. But surely there’s also a risk in appearing weak and irresolute. Already, frustration with Pelosi in the Democratic base is threatening to curdle into despair. “I see the grass-roots activists who helped build the wave last year really wondering what they built that wave for,” Ezra Levin, co-founder of the progressive group Indivisible, told me.
In the end, our system offers no mechanism besides impeachment to check a president who operates like a mob boss. It’s true that Democrats will remove Trump only by beating him in 2020, but he is already cheating in that election, just as he did in 2016, and paying no price for it.
A formal impeachment process would, if nothing else, give new weight to Democratic claims when they go to court to enforce subpoenas or pry loose documents the administration is trying to hide. It would show that Democrats are serious when they say that Trump’s behavior is intolerable, and potentially allow them to seize control of the day-to-day narrative of this rancid presidency. Trump does not want to be impeached — a Monday Politico headline says, “Trump’s team is trying to stop impeachment before it starts.” It’s hard to imagine why any Democratic leader would assist them."
Opinion | Nancy Pelosi’s Failure to Launch - The New York Times
Posted by John H Armwood II at 7:20 PM