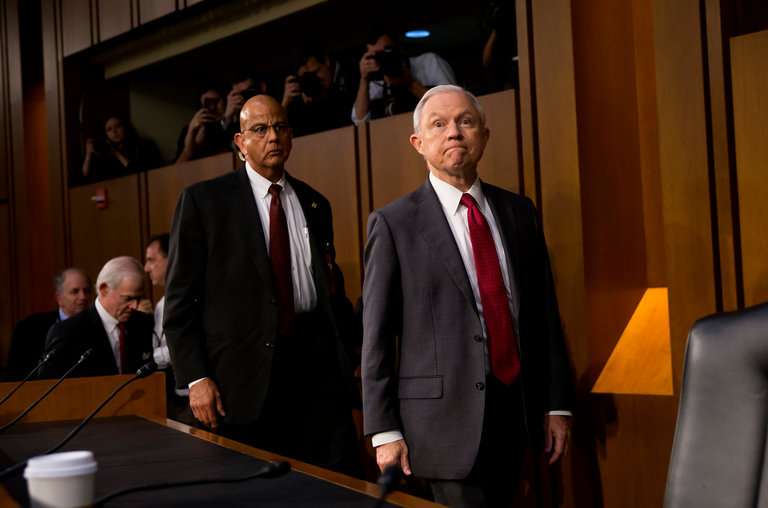 "WASHINGTON — Attorney General Jeff Sessions repeatedly refused to answer senators’ questions on Tuesday about his conversations with President Trump, even though Mr. Trump had not asserted executive privilege to keep them secret. That raises questions about whether Mr. Sessions had any legal basis to stonewall Congress.

In testimony before the Senate Intelligence Committee, Mr. Sessions argued that it would be “inappropriate” for him to talk about such confidential discussions because the president might choose to assert the privilege in the future.

“I’m protecting the president’s constitutional right by not giving it away before he has a chance to view it and weigh it,” he said.

Before the same panel last week, Dan Coats, the director of national intelligence, and Adm. Michael S. Rogers, the director of the National Security Agency, gave a similar rationale for not answering questions.

The pattern has angered Democrats, who argue that the officials are improperly impeding Congress’s oversight investigation.

Here are several issues raised by the dispute.

What is executive privilege?

Presidents have claimed the power under the Constitution to prevent the other branches of the government from gaining access to certain internal executive branch information, so that, among other things, the president and top White House aides can communicate confidentially with other officials. The idea is to avoid a chilling effect on the candor of the advice the president receives about his constitutional duties.

Normally, a witness who refuses to answer a question at a congressional hearing can be held in contempt of Congress and face criminal prosecution. Congress could also file a lawsuit asking a judge to order the witness to provide the information, raising the further possibility of being imprisoned for contempt of court. But a valid assertion of executive privilege would provide a lawful basis to decline to answer.

How is the privilege activated?

The president asserts that particular information is covered by the privilege. This was the core of the complaint some lawmakers made against Mr. Sessions on Tuesday: Internal executive branch information is not legally shielded from Congress by default; rather, the president chooses whether to invoke it in a particular instance.

Do officials have a legal right to avoid providing potentially privileged information?

No, but Congress rarely demands immediate answers when an objection arises, either. In practice, the executive branch and Congress generally negotiate over access to information that the president believes he has a constitutional right to keep confidential and that lawmakers believe falls within their own constitutional powers to carry out their oversight responsibilities.

Generally, such disputes have been resolved with some accommodation that falls short of a definitive court ruling, so this is a “constitutional gray area,” said Mark J. Rozell, a George Mason University professor who has written books about executive privilege.

Previous executive branch officials of both parties have withheld information requested by Congress in the same manner.

During President Barack Obama’s administration, when the Senate Intelligence Committee investigated the Central Intelligence Agency’s post-Sept. 11 torture program, the C.I.A. did not turn over nearly 10,000 pages of documents sought by Senate investigators because they showed potentially privileged communications with George W. Bush’s White House, like notes of briefings and Situation Room meetings. Instead, it held them back for years as a topic for future negotiations.

Eventually, the committee decided to finish its report without gaining access to those documents, even though Mr. Obama had never asserted executive privilege.

Mr. Sessions said there was “a longstanding policy of the Department of Justice not to comment on conversations that the attorney general has had with the president” and told several senators that he believed those rules were in writing. But as senators pressed him for details about a written directive, it appeared that he was instead describing a general practice.

After the hearing, the Justice Department circulated two Reagan-era documents that it said laid out the basis for a historical, executive-branch-wide practice of declining to answer congressional questions about confidential conversations with the president.

The first was an August 1982 memo by the Justice Department’s Office of Legal Counsel titled “Confidentiality of the Attorney General’s Communications in Counseling the President.” It laid out constitutional arguments for why such communications are subject to a potential claim of executive privilege, but did not specifically address whether officials may decline to answer lawmakers’ questions without an assertion by the president.

The other was a November 1982 White House directive to the heads of all executive branch departments and agencies, signed by President Ronald Reagan, which laid out procedures for “this administration” governing congressional requests for information. It said that if Congress requested information that might be subject to executive privilege, officials should “request the congressional body to hold its request in abeyance” pending a final presidential decision on whether to assert the privilege.

In theory, Senate rules do not require subpoenas to open a contempt-of-Congress action, said Michael Davidson, who was the top lawyer for the Senate from 1979 to 1995 and later served as the top lawyer to the Senate Intelligence Committee until his retirement in 2011.

Because even voluntary witnesses swear to tell “the whole truth” when they are sworn in, he said, a frustrated lawmaker who wanted to pursue the matter immediately could have asked the committee chairman, Senator Richard M. Burr, Republican of North Carolina, to overrule Mr. Sessions’s objection and order him to answer the questions. But in practice, Mr. Davidson said, Congress has not acted like that. Every enforcement proceeding in which the Senate went to court during his time as legal counsel, he said, involved a subpoena.

And from the executive branch’s perspective, a subpoena may be required, according to a June 1989 Office of Legal Counsel memorandum titled “Congressional Requests for Confidential Executive Branch Information.”

“Only when the accommodation process fails to resolve a dispute and a subpoena is issued does it become necessary for the president to consider asserting executive privilege,” William P. Barr, then the assistant attorney general, wrote in the memo."