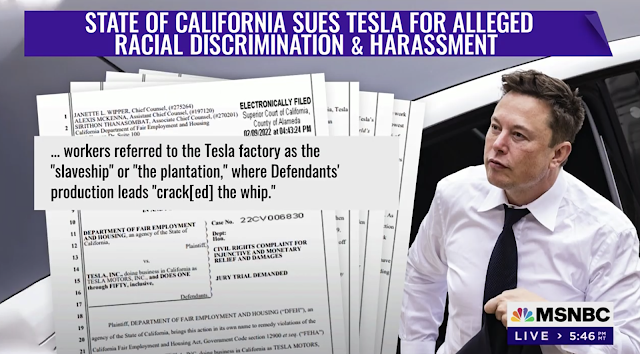 "Tesla has called the lawsuit “unfair and counterproductive,” asserting that the allegations “focus on events from years ago.”

The state of California has filed a lawsuit against Tesla over allegations the company has operated a “racially segregated workplace” at its factory near San Francisco.

Kevin Kish, director of the California Department of Fair Employment and Housing, said Wednesday that the agency sued "after receiving hundreds of complaints from workers" regarding Tesla's Fremont factory.

After investigating those allegations, officials found evidence that the Fremont factory "is a racially segregated workplace where Black workers are subjected to racial slurs and discriminated against in job assignments, discipline, pay, and promotion creating a hostile work environment," according to a statement from the department.

"The facts of this case speak for themselves," Kish said, adding that the department would continue to take steps to "keep workplaces free of harassment and racism."

Tesla called the department's plans to sue "unfair and counterproductive," asserting that the allegations "focus on events from years ago."

In a statement Wednesday that appeared to be released before the lawsuit was filed, the electric vehicle manufacturer said it would be asking the court to “pause the case and take other steps to ensure that facts and evidence will be heard.”

It said that as of Wednesday, the California Department of Fair Employment and Housing had declined to provide the company with "the specific allegations or the factual bases for its lawsuit" despite repeated requests.

The lawsuit, Tesla said, "follows a three-year investigation during which the DFEH — whose mission is supposedly to protect workers — has never once raised any concern about current workplace practices at Tesla. Rather, the lawsuit appears focused on alleged misconduct by production associates at the Fremont factory that took place between 2015 and 2019."

The company said it "strongly opposes all forms of discrimination and harassment and has a dedicated Employee Relations team that responds to and investigates all complaints."

It also noted that it has a diversity, equity and inclusion team and has "always disciplined and terminated employees who engage in misconduct, including those who use racial slurs or harass others in different ways."

It added that the company has rolled out a training program that reinforces its requirements that all employees treat other with respect.

The company said it is the "last remaining automobile manufacturer in California," noting that the Fremont factory has a majority-minority workforce and highlighting the company's record on sustainability and the creation of clean energy jobs.

"Attacking a company like Tesla that has done so much good for California should not be the overriding aim of a state agency with prosecutorial authority," it said."