"There's a long history in this country of people needing to show their papers," Janey told CNN affiliate WCVB on Tuesday when asked by reporters about New York City's announcement.
Janey then listed several examples of how people in the United States have been asked for documentation in the past, "during slavery, post-slavery, as recent as...what [the] immigrant population has to go through here. We heard Trump with the birth certificate nonsense," she said.
During slavery, freedom papers or certificates of freedom were documents that African Americans secured as proof they had a right to move and remain safe from enslavement.
"Here, we want to make sure that we are not doing anything that would further create a barrier for residents of Boston or disproportionally impact BIPOC (Black, Indigenous and people of color) communities," Janey said. 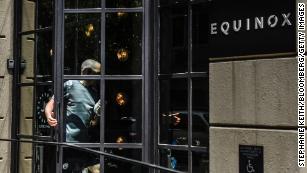 These places won't let you inside without proof of vaccination
In a statement to CNN, Janey said she "wants to see every Boston resident get vaccinated" and that "requiring vaccines in public venues will have a disproportionate impact on low income families, and in communities of color."
City officials are focused on making sure vaccination rates are up "across every neighborhood and in every community," Janey said in the statement.
Janey is leading one of America's oldest cities in an acting capacity after President Joe Biden tapped former Boston Mayor Marty Walsh to serve in his administration as Labor secretary. She is seeking a full term as mayor.
Other mayoral candidates, all of whom are women or people of color, voiced opposition to Janey's remarks about the vaccination rule.
"When we are combating a deadly virus & vaccine hesitancy, this kind of rhetoric is dangerous," one of the candidates, Boston City Councilor Andrea J. Campbell, tweeted.
"Showing proof of vaccination is not slavery or birtherism. We are too close to give ground to COVID. Science is science. It's pretty simple - Vax up and mask up," Campbell wrote.
Campbell and Janey are the only Black women mayoral candidates on the ballot.
City Councilor Michelle Wu, who is another candidate for mayor, said in a tweet Tuesday, "Our leaders need to build trust in vaccines."
Wu said she supports mandating vaccines for city workers and "requiring proof of vaccination to protect people...so the burden does not fall on our small businesses and workers."
Janey's remarks come after New York City Mayor Bill de Blasio announced a policy that will require people to show proof of vaccination to enter all restaurants, fitness centers and indoor entertainment venues.
"If you're unvaccinated, unfortunately, you will not be able to participate in many things," de Blasio said. "If you want to participate in our society fully, you've got to get vaccinated."
A written statement from Janey's office, obtained by WCVB, says the city has no plans for "business section vaccination mandates" but city officials are meeting with restaurants and bars to discuss "overlaps between their clientele and new COVID-19 case trends."