"The Supreme Court’s decision upholding voter restrictions in Arizona paves the way for widespread disenfranchisement of voters of color. 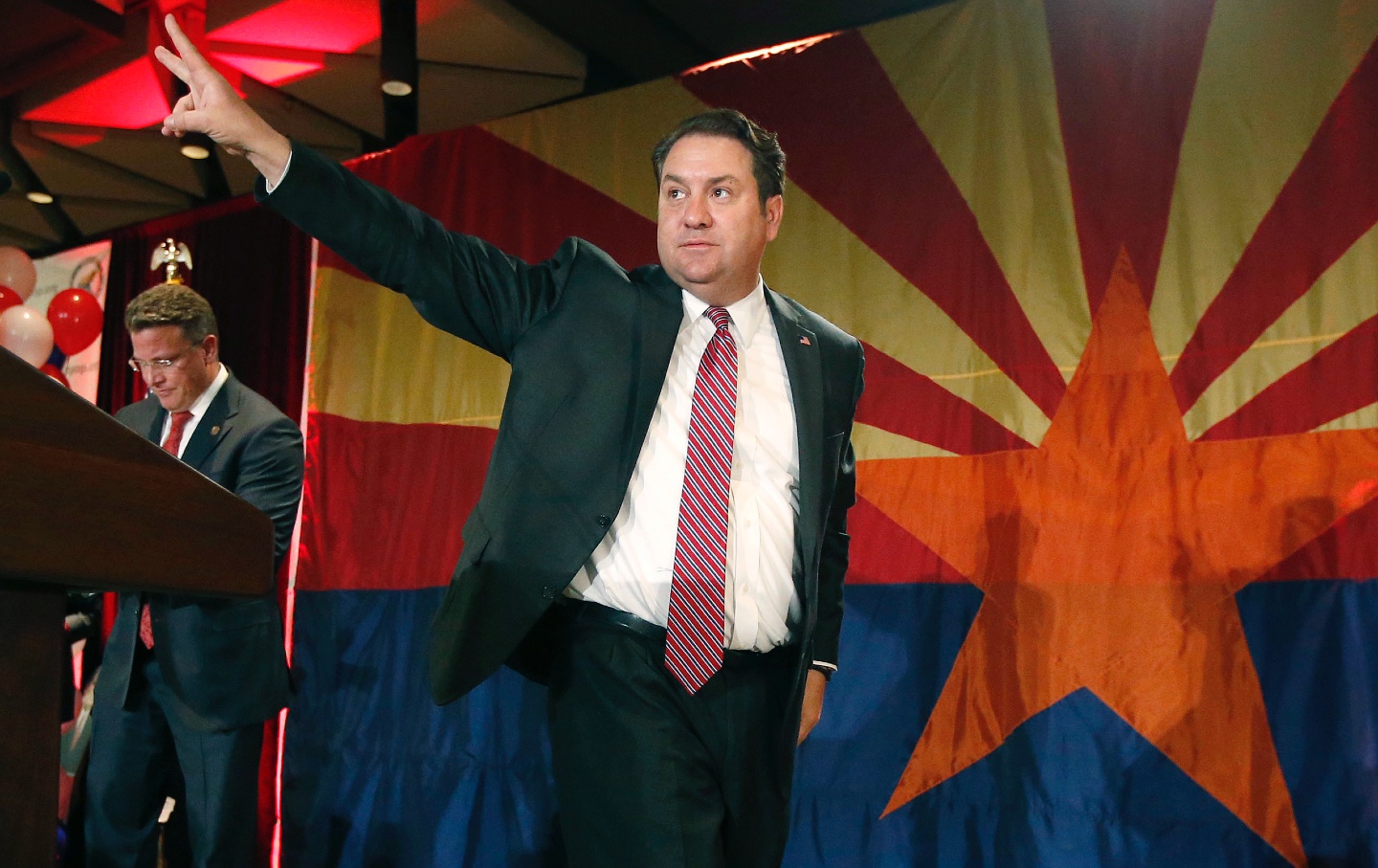 The 15th Amendment, of course, prohibits both state and federal governments from denying the right to vote on the basis of race. Conservatives were shockingly effective at reading this amendment out of the Constitution for the first hundred years after its ratification. The amendment was so bad at stopping conservative racism that we needed a whole different rule, the 24th Amendment, which was ratified in 1964, to outlaw the poll tax, which had become a favorite way for white people to deny minority voting rights.

Finally, in 1965, Congress passed, and Lyndon Johnson signed, the Voting Rights Act. This was the first real attempt to make illegal what the 15th Amendment had technically already made unconstitutional. Section 2 of the Act prohibited states from enacting voting procedures that discriminated on the basis of race or color, and in 1982 Section 2 was amended to include the “totality of the circumstances”—meaning that courts should look at the impact on minority voters, not just the plain text of the law—when determining if any individual voting restriction is in violation of the act.

The Voting Rights Act is to the 15th Amendment what the Volstead Act was to the 18th Amendment’s prohibition on alcohol. It gave form and function to the constitutional thought bubble. That’s because a constitutional amendment, without a piece of legislation to enforce it or way to sue the government if violated, is less like a “law” and more like a “helpful suggestion.” White state governments have already proven that they can erect an entire system of political apartheid despite the existence of the 15th Amendment, but they’ve had a much more difficult time getting around the Voting Rights Act. Oh, they’ve tried. But they never fully succeeded—until now.

Yesterday, in a Supreme Court case called Brnovich v. Democratic National Committee, Justice Samuel Alito told conservatives how to defeat the Voting Rights Act, once and for all. White supremacists don’t have to storm the Capitol to hoard political power anymore. They just have to follow Alito’s instructions.

The issue in the case was pretty straightforward, as these things go. Arizona had enacted two voter restrictions. One outlawed “ballot harvesting”—which is the scary Republican label for, say, an older person giving their mail-in ballot to somebody else to walk it to the drop-off location. The other allowed the state to discard votes accidentally submitted at the wrong polling place.

Both of these laws had the effect of suppressing minority voter participation. That’s not a conjecture I’m making based on my apparent Black superpower of understanding what white people are trying to do. That’s an empirical fact, one we know from the data we have from Arizona elections, and that was acknowledged by the Arizona defenders of the laws and the Supreme Court itself. These laws disproportionately affected voters of color, period.

But the 6-3 conservative majority on the Supreme Court said that the racial bigotry inherent in these laws is fine, because they concluded it’s not that much bigotry. In the situation where ballots are cast in the wrong precinct, Alito noted that 1 percent of Hispanic, African American, and Native American voters cast votes in the wrong precinct (votes that can now be completely discarded in Arizona), while .5 percent of white voters did. Alito says that this disparity is too small to matter for the Voting Rights Act.

This feels like a good time to mention that Joe Biden beat Donald Trump by just .3 percentage points in the Arizona 2020 presidential election. But hey, what’s a half-point of racism between friends in an allegedly representative democracy, amiright?

Alito called this and other instances of voter suppression a “mere inconvenience” and concluded that even if the inconveniences disproportionately affected voters of color, the disproportion wasn’t bad enough to violate the Voting Rights Act.

Elena Kagan, joined by Stephen Breyer and Sonia Sotomayor, blasted Alito’s framing in a dissent that is already more well-known than Alito’s majority opinion. It’s worth reading in full, but this part is stellar:

And what is a “mere inconvenience” or “usual burden” anyway?… Consider a law banning the handing out of water to voters. No more than—or not even—an inconvenience when lines are short; but what of when they are, as in some neighborhoods, hours-long? The point here is that judges lack an objective way to decide which voting obstacles are “mere” and which are not, for all voters at all times.

Kagan’s mention of water was a clear reference to the current eruption of voter suppression laws, enacted by Republicans in Georgia and elsewhere. She was absolutely right to go there, because Alito’s awful logic will not stay in Arizona. Instead, it will give voter-suppression efforts (those already happening and those yet to come) a clear safe harbor to smuggle in all their bigotry.

Alito applies his new conception of the Voting Rights Act to laws restricting the “time, place, and manner” of voting. Alito then makes up a five-factor test to apply to these voter restrictions (spoiler alert: racists win), but the upshot is that, going forward, states that argue that their voter suppression efforts only restrict when people can vote, where they can vote, and what they have to do in order to vote can functionally ignore the Voting Rights Act. It won’t matter if those time, place, and manner restrictions have a disparate racial impact. It won’t even matter if those restrictions are done with the express intent of racial bias. The presumption that voter restriction is illegal if it is designed to exclude or suppress minority voters has been replaced by Alito’s new ruling that the state can impose restrictions that merely inconvenience voters of color on purpose.

Alito’s pathway will be adopted by other white courts and lawmakers eager to disenfranchise Black voters. The current Department of Justice lawsuit against Georgia will be an early example. I expect courts will soon be quoting Alito, not Kagan, as they issue decisions denying Black folks water while they wait to cast their ballots. Dehydration is just a minor inconvenience, after all.

This country has lived under a regime of voting inconveniences before: It was called the Jim Crow South. Trying to guess which day the election was on (time) when the authorities would lie to you was pretty inconvenient. Having to walk halfway across the county to get to the one, barely advertised polling site (place) was pretty inconvenient. And having to prove clairvoyance and guess the number of jellybeans in a jar (manner) was sho’ nuff inconvenient to American citizens trying to exercise their right to vote. It was the Voting Rights Act that tried to put a stop to all that, but now the six conservatives on the court have tried to put a stop to the Voting Rights Act.

This is what conservative justices have always been here to do. People think that the issue that unites conservative justices is hostility toward abortion or antipathy toward the LGBTQ community or a shared passion for corporate malfeasance. And sure, conservatives broadly share horrible views about all that stuff. But the thing that truly binds a Trump judge with a Bush judge with a Ronald Reagan judge, the thing that reaches out across time and space to put Roger Taney in bed with William Rehnquist and John Roberts is their rejection of Black voting rights and the laws and the precedents meant to protect them. The idea that the 15th Amendment prohibits laws that say “No N***** Votes” but nothing else is the consistent theme of conservative voting-rights decisions. Unless the law explicitly uses the n-word, conservatives are going to tell you that it’s a “race neutral” restriction on voting and turn to stone.

There is nothing that can be done about these people and their persistent attacks on voting rights other than to expand the court to dilute their influence. Congress can’t just pass a law, because conservative justices will overrule that law or limit it to the point that it loses all value. Congress can’t amend the Constitution, because, as we’ve seen, conservatives are entirely able to ignore constitutional amendments. (Even the comparatively simple poll tax amendment was ignored by conservative justices last year when the state of Florida reinstituted just such a tax for people who had been incarcerated.) We can’t elect “better leaders” at the state level who will refuse to pass voter suppression laws, because conservative courts have allowed Republicans to gerrymander districts to weaken minority voting rights. And we can’t elect better leaders at the national level because the Senate and the Electoral College bake in white minority rule through the unequal representation of the Senate, which itself is a constitutional hangover from a “great compromise” with slaveholders.

The only solution is to protect voting rights by expanding the courts with judges and justices who will protect voting rights, and then hope and pray that enough people avail themselves of their rights that the white supremacist rump of the Republican Party never gets full control of all three branches of government again. That is the way. That is the only way. I know that is the only way, because we’ve tried every other way.

Conservatives will never stop trying to take away the right of nonwhite citizens to vote. That has been their unyielding position since the end of the Civil War. You can have a free and fair democracy, or you can have conservatives in control of the judiciary, but the history of this country says that you can’t have both."

Bigots Have Finally Accomplished Their Goal of Gutting the Voting Rights Act | The Nation
Posted by John H Armwood II at 1:17 PM