Biden Is Not Meeting the Moment on Voting Rights | The Nation

Biden Is Not Meeting the Moment on Voting Rights

"A passionate speech is no match for the GOP’s commitment to voter suppression and election subversion. 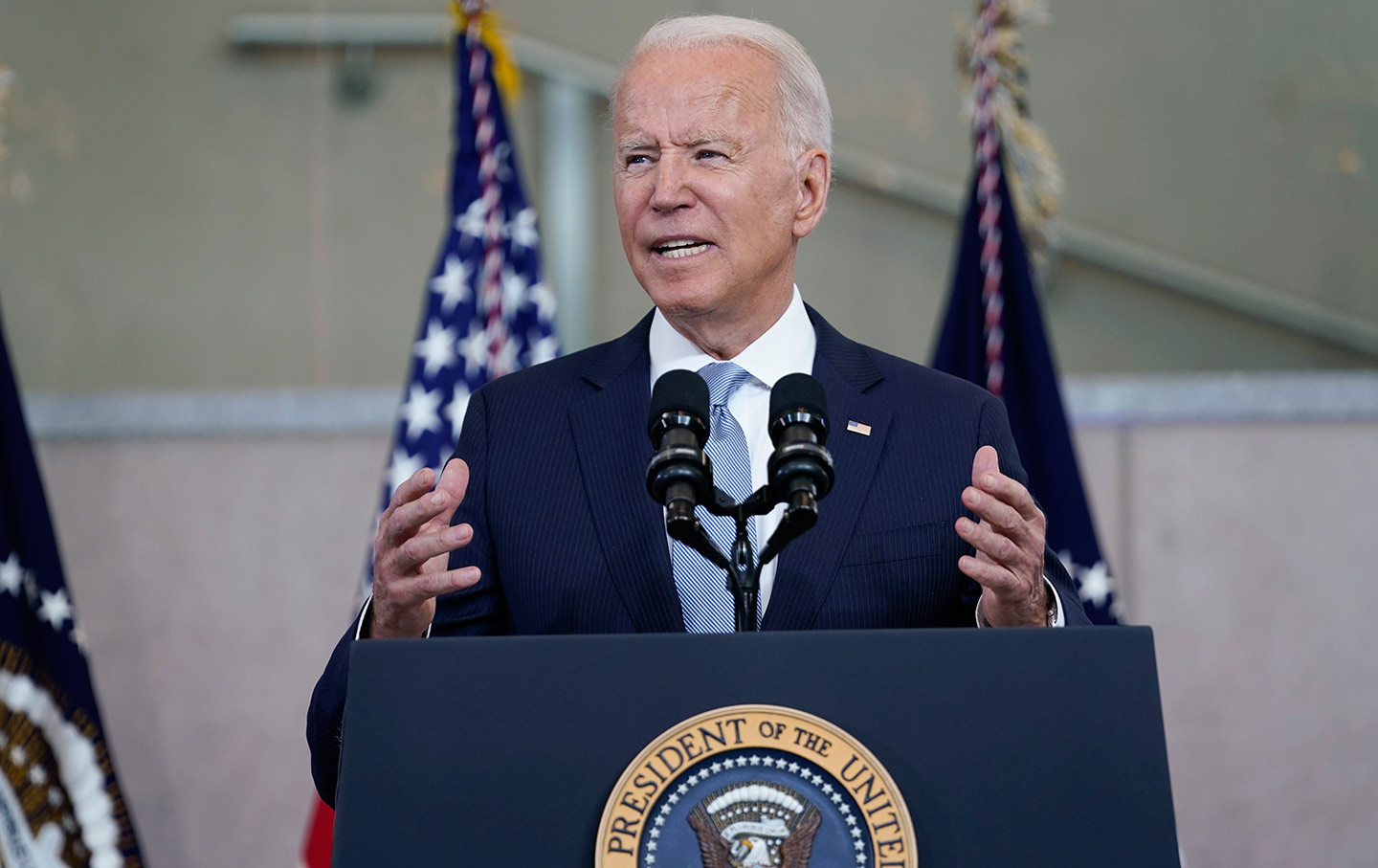 There’s a sad metaphor in the fact that brave Texas Democrats fleeing Austin to block a voter suppression bill arrived in Washington, D.C., just in time to see President Joe Biden go to Philadelphia to make a heralded speech on voting rights. It wasn’t deliberate; the speech was previously planned. But it symbolized the current mismatch between the urgency of grassroots Democrats and Biden’s go-slower, speechifying approach to solving the crisis of democracy.

Outside the National Constitution Center, Biden delivered a passionate defense of voting rights and a careful enumeration of Trump’s many efforts to subvert the 2020 election. “It was the most scrutinized election in American history. More than 80 judges heard [Trump’s arguments] and in every case, neither cause nor evidence was found,” Biden told a friendly crowd. “The big lie was just that: a big lie.”

The emotional climax of Biden’s speech was probably supposed to be his exhortation to Republicans: “Stand up for God’s sake, and help prevent the subversion of our elections and the sacred right to vote. Have you no shame?”

But that was a softball question. You could hear Democrats around the country screaming at their televisions: “No, they don’t!” (Well, at least on Twitter.) We’ve known for quite a while the modern GOP has zero shame—and if they do, they leave the party.

Voting rights advocates were not satisfied, though many applauded Biden’s announcement that the Department of Justice will double the size of its voting rights division and step up its scrutiny of new voter suppression laws.

“It is clear the president understands the history and the moment, but it is not clear what he intends to do about it,” New Georgia Project director Nse Ufot told MSNBC right after the speech.

Biden’s speech also seemed politically a bit behind the current debate. While it was encouraging to hear him endorse both the For the People Act and the John Lewis Voting Rights Act, neither is going to pass unless the Senate does away with the filibuster, a step West Virginia Senator Joe Manchin and Arizona Senator Kyrsten Sinema adamantly oppose. The only piece of voting legislation that has a chance of passing right now is whatever Manchin can cobble together.

Last month Manchin proposed a surprisingly strong compromise version of the John Lewis Act (with parts of For the People) that Georgia voting rights advocate Stacey Abrams immediately endorsed. Senate minority leader Mitch McConnell immediately killed its chance to win Republicans by terming it “the Stacey Abrams compromise.” So far, only Senator Lisa Murkowski has expressed any support for any part of Manchin’s counterproposal. But Manchin is allegedly still trying to pursue the compromise, though little or no legislative language has been written. Where does Manchin’s compromise effort stand, and how will Biden support it? He didn’t tell us.

One of his most disappointing lines, to me, came when he called on voting rights supporters to assemble “a new coalition” behind voting rights “to raise the urgency of this moment.” Respectfully, Mr. President, a vibrant coalition exists right now; it elected you, and a Democratic Senate, and it feels an enormous amount of urgency. Yes, it could be broader and better funded. But from Abrams’s Fair Fight Action through LaTosha Brown and Cliff Albright’s Black Voters Matter, to Ufot’s New Georgia Project, Marc Elias’s Democracy Docket, the historic and still vital commitment of the NAACP Legal Defense Fund (I’m missing many more), there’s a vital movement behind voting rights.

The activism is locally based too: Arizona groups like Unite Here joined Black Voters Matter, more grounded in the Southeast, for a Freedom Ride two weeks ago, traveling throughout hallowed voting rights sites in the South on their way to Washington, D.C. Organizers have been arrested at Sinema’s offices in Arizona and in Washington. The Rev. William Barber and the Rev. Jesse Jackson were arrested outside Manchin’s Senate office last month. Barber just launched a 28-day voter-suppression protest today with the Moral Monday and Poor People’s Campaign. Sure, there needs to be more activism—and it will require more than the $25 million in funding Vice President Kamala Harris announced last week that the Democratic National Committee will put behind the movement.

But there are people out here building coalitions; the president has to help figure out how to build on those coalitions to actually pass legislation. And as Marc Elias told me after Georgia’s voter suppression bill passed in March: It’s wrong to expect Black voters to organize and to jump ever-greater hurdles to get to the ballot box, even though we’ve seen them do it all over the country. “You can’t romanticize that!” he says. The media does that every election cycle: “They say, ‘Oh, look at the enthusiasm, the passion!’ The fact that Black voters wait in long lines is admirable—I don’t want to diminish that. But the fact is this law is going to make all of the ills of voting in Georgia much worse.” And so will the similar laws passing in other states, from Arizona to Florida to, almost certainly, Texas.

I have defended Biden many times against charges that there’s a whole lot he can do if Manchin and Sinema won’t budge. You can’t get rid of the filibuster with 48 Democratic votes—or negotiate a voting rights carve-out. It bothers me no end that Manchin accepts the 50-vote rule on budget reconciliation, which can be used to pass tax cuts or a bold infrastructure plan, but not for voting rights. I don’t pretend to think there’s something obvious Biden could do and isn’t doing to bring Manchin and Sinema along.

But I do think he could be louder and bolder on this issue. A 3 pm speech in Philadelphia is nice; a prime-time speech, perhaps to a joint session of Congress, would truly elevate the issue. I would hope he’ll meet with some of the Texas Democrats fighting so hard to preserve democracy. Today, they met with Manchin, which was a big step, since he only sent staff to meet them the last time they were in Washington, along with Senate majority leader Chuck Schumer and Vice President Harris.

As NAACP Legal Defense Fund President Sherrilyn Ifill said after meeting with Biden last week: “Our backs are against the wall. This is the moment. We have no more time.” “I told the president,” she added, “We will not be able to litigate our way out of this threat to Black citizenship.” We may not be able to vote our way out of it, either, if these new laws stand. Biden needs to rise to this moment, and so far, he has not."

Biden Is Not Meeting the Moment on Voting Rights | The Nation
Posted by John H Armwood II at 8:40 AM