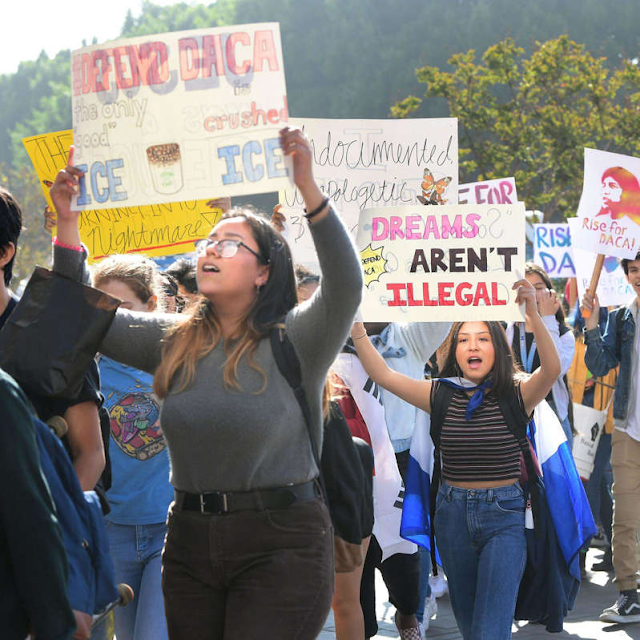 "When he turned 15 in 2017, Agustin became eligible for the Deferred Action for Childhood Arrivals (DACA) program, the Obama-era policy that provides protection from deportation and work permits to undocumented immigrants who arrived in the U.S. as children.

But Agustin and his family decided it would be best to hold off on applying, fearing that any information sent to the government could be used against them, given Donald Trump's election in 2016.

"It was very clear [President Trump] was not interested in keeping DACA as a program, and we felt that it would be unwise to apply for a program that would give the government our location — and we could be deported easily," Agustin, who is now 18, told CBS News.

The Trump administration ended up suspending DACA in September 2017. While it was not able to end the work permits and deportation protections of current recipients because of court rulings, the administration closed DACA to new applications, leaving prospective applicants like Agustin in limbo.

In December 2020, a federal court ordered the Trump administration to reopen DACA to new applicants. The news elated Agustin, who submitted his application this spring. "I was so happy," he remembered.

But Agustin's excitement was short-lived. Earlier this month, a federal judge in Texas directed the Biden administration to stop granting new DACA requests, calling the program illegal. Agustin was locked out of DACA — again.

"It was devastating," said Agustin, who was brought to the U.S from Mexico as a 3-year-old. "I don't know if I have fully processed it yet. It was like I was in a state of shock. I was so close to being able to do so much and a judge says, 'No, you're not allowed to do this.'"

This month's court ruling has dashed the hopes of up to 300,000 immigrant teenagers and young adults living in the U.S without legal permission who could qualify for DACA. As of late June, at least 81,000 immigrants had pending first-time DACA requests, which the government is now barred from approving.

For teenagers in U.S. high schools, the court ruling means not being able to obtain a driver's license or a summer job. For college-bound or university students, it blocks them from working legally in the U.S. For young adults, it means not being able to provide financially for their families, including their own children who are U.S. citizens.

"For these youngsters, these teenagers who are aging into eligibility in a really critical developmental period of their lives and not being able to get DACA, it's really detrimental to their future trajectories," Roberto Gonzales, a University of Pennsylvania professor who has studied undocumented youth since 2002, told CBS News. "It curves, if not cuts off, possibilities for them."

Agustin, who graduated from a Virginia high school last year, is currently volunteering in a local rescue squad, running ambulance calls. He wants to become a certified EMT and study nursing. But he's aware that he currently can't legally start a paid profession.

"I've lived here my whole life," Agustin said. "Dreamers have lived here our whole lives. And there's no reason to think of us as anything but Americans. We want to do everything that American can do and it seems like there's this barrier that has just been put up against us."

Arlette Morales, 18, also applied for DACA this year. She even completed the biometric appointment most first-time applicants have to attend in May. Like Agustin, she became eligible for DACA during the Trump administration and now finds herself locked out of the program once again.

"It was heartbreaking again to go through this battle that we constantly are going through," Morales told CBS News, saying the uncertainty surrounding the fate of DACA has inflicted "a lot of emotional damage."

Morales, who graduated from a Pennsylvania high school this spring, said she was looking forward to getting a job, as well as a driver's license to take her younger siblings to school. DACA, she added, would have also allowed her to feel protected from the threat of deportation.

"I thought I was basically close to the finish line," Morales added. "But unfortunately, I was not."

The Biden administration has pledged to appeal this month's court order and to publish a rule that would codify DACA into a regulatory policy, but it hasn't given any timeframe for these actions.

On Capitol Hill, the recent court ruling has injected a renewed sense of urgency into the debate over whether to permit DACA enrollees and other so-called "Dreamers" to request permanent legal status.

Given the evenly divided makeup of the Senate, a growing number of Democratic lawmakers back the idea of legalizing Dreamers through the budget reconciliation process, which can be authorized by a simple majority.

"I think we have to do everything we can to protect our Dreamers. And if it means getting a pathway to citizenship for our Dreamers passed through reconciliation, then that is the path we have to take," Nevada Senator Catherine Cortez Masto, a Democrat who represents 11,000 DACA beneficiaries, told CBS News.

Cortez Masto noted that first-time DACA applicants were not responsible for processing delays at U.S. Citizenship and Immigration Services (USCIS), which oversees the program. As of May 31, only 1,900 — or 3% — of more than 62,000 first-time DACA applications filed this year had been adjudicated, according to USCIS data shared with Congress.

USCIS announced on Tuesday that it would place pending first-time DACA applications "on hold" while the Texas court ruling remains in effect. Immigrants with these pending requests will not get a refund for the $495 application fee they paid, USCIS said.

Agustin, the first-time DACA applicant who lives in Virginia, expressed bewilderment about Congress' longstanding failure to legalize undocumented immigrants brought to the country as minors.