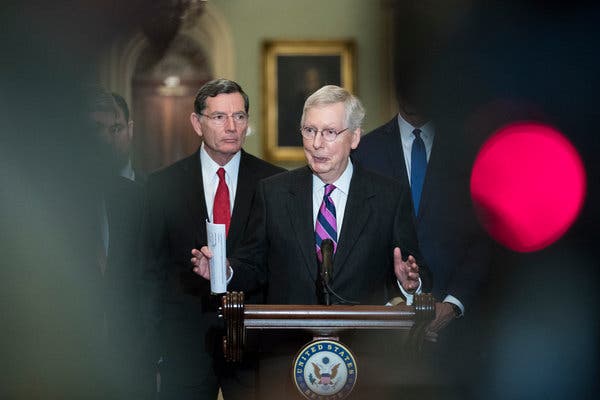 "WASHINGTON — Senator Mitch McConnell, the majority leader, conceded on Monday that he could not stave off final passage of a resolution overturning President Trump’s national emergency declaration, setting up a rebuke to Mr. Trump amid signs that the president’s grip even on his own party in Congress may be slipping.

With Senator Rand Paul of Kentucky joining three other Republicans — Susan Collins of Maine, Lisa Murkowski of Alaska and Thom Tillis of North Carolina — in announcing he would support the measure, Democrats now have the 51 votes they need to secure passage and to force Mr. Trump to issue the first veto of his presidency.

Mr. McConnell is exploring whether he can amend the House-passed resolution of disapproval, to send it back to the House and slow its trip to the president’s desk. Ms. Collins and Ms. Murkowski are both sponsors of a separate resolution, virtually identical to the House resolution, introduced in the Senate last week.

And while a veto is highly unlikely to be overturned, the congressional majority that forces it will stand as a powerful rejection of the tactics Mr. Trump has used to fulfill his top campaign promise to build a wall on the southern border — and will apparently be the first time since passage of the National Emergencies Act of 1976 that Congress has voted to overturn an emergency declaration."