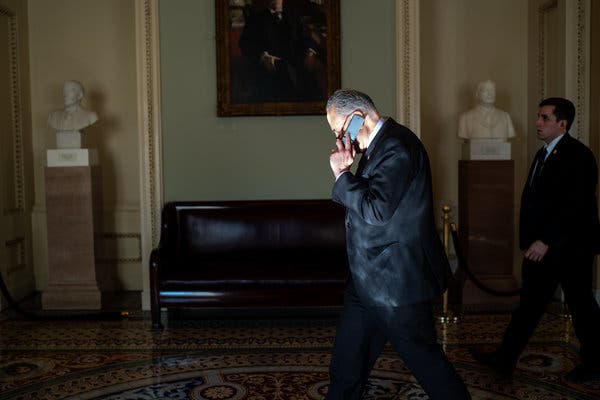 WASHINGTON — Facing a showdown vote as early as this month over the embattled “Green New Deal,” Senate Democrats are preparing a counteroffensive to make combating climate change a central issue of their 2020 campaigns — a striking shift on an issue they have shied away from for the past decade.

Senator Chuck Schumer of New York, the Democratic leader, outlined the new strategy in an interview last week, casting it as a way to mobilize millennial voters, a key part of the Democratic constituency that the party will need to turn out to win in swing states.

With progressives pushing Democrats to embrace the Green New Deal — and Republicans ridiculing the idea as socialism — Mr. Schumer is effectively trying to turn a weakness into a strength. He is planning daily floor speeches attacking Republicans for inaction and a proposal for a special Senate committee focused on the issue, which he intends to announce this week.

And while there is virtually no chance of passing climate change legislation in a Republican-controlled Senate with President Trump in office, Mr. Schumer said he wanted legislation to run on next year — and bring to a vote in early 2021, should his party win the White House and the Senate.

“This is the first time Democrats have decided to go on offense on climate change,” Mr. Schumer said in an interview in his office. Asked about a bill, though, he conceded that “it’s going to take us a little while to come up with a consensus that works.”

But even one of the most ardent evangelists for climate action, former Vice President Al Gore, conceded that it could be difficult for the party to come together around actual legislation. “This is a heavy lift politically,” he said.

Despite that, Democrats see fighting climate change as a winning issue on the campaign trail — a way to mobilize not only young voters but also progressives, who are increasingly talking about the environment in terms of economic and social justice, given the outsize effect pollution has on minority communities.

Climate change has for the first time emerged as a front-and-center issue in national political campaigns. On Friday, Washington’s governor, Jay Inslee, announced that he would campaign for president on the signature issue of fighting climate change. Other Democratic presidential candidates regularly make campaign speeches about the subject, and most initially rushed to back the Green New Deal, the liberal social policy proposal made famous by its author, Representative Alexandria Ocasio-Cortez of New York. Students around the world are “striking” from school this spring to demand action.

But the rise of climate change as a rallying cry has come with huge downsides for Democrats. The ambitions of its youthful advocates have clashed with the caution of Democratic veterans, memorably caught in a viral video of middle and high schoolers confronting Senator Dianne Feinstein of California.

And in a speech to conservative activists on Saturday, President Trump appeared to salivate at the chance to confront Democrats on the issue. “I encourage it,” he mockingly said of the Green New Deal. “I think it’s really something that they should promote.”

Republicans see a political advantage in tying Democrats to the most contentious Democratic proposals, like linking climate change policy to universal employment.

Senator Mitch McConnell of Kentucky, the majority leader, plans to put the Green New Deal to a vote, without a single hearing or legislative language, as a way of daring Senate Democrats, especially those running for president, to go on record in favor of it.

“Whether or not they agree with everything in the Green New Deal, they are going to be lumped into what that proposal was,” said Antonia Ferrier, a Republican strategist and former top aide to Mr. McConnell. “To be charitable to them, they care about this issue and think it’s important. But they also do run a risk of alienating a lot of independent-minded voters in some of those states that Hillary Clinton lost in 2016.”

Democrats have been skittish about embracing the “green activist” label at least since 2000, when Mr. Gore lost his bid for the White House. Their unease worsened in 2010, when President Barack Obama’s effort to push a climate change bill through Congress crashed in the Democratic Senate and helped sink the careers of some Democrats who voted for it.

Photo by: Hilary Swift for The New York Times

“Climate change, to our frustration, was never an issue that rung a bell with voters, particularly in the throes of coming out of an economic crisis,” said David Axelrod, the former chief political strategist to Mr. Obama. “But now we’re a decade down the road, and the road is surrounded by floods and fires in a way that is becoming more and more visible.”

Polls show that millennial voters, the largest voting demographic, consistently rank climate change as an issue of top concern — something older generations never did. A 2018 poll by the Pew Research Center found that millennials are the only generation in which a strong majority — 65 percent — says both that there is solid evidence of global warming and that this is attributable primarily to human activity.

Mr. Schumer said that he believed voters now saw climate change as an issue that affected them in their daily lives, as scientific reports link climate change to damaging extreme weather, such as stronger storms, flooding and drought.

He pointed to “the energy of the young people” on the issue and added, “We want to take that energy and channel it into something more constructive.”

Celinda Lake, a Democratic strategist, said that if Democrats talked about the issue correctly — using phrases like “transitioning to green energy,” rather than the more polarizing “climate change” — they could win over Trump voters, who associate words like “transition” and “energy” with jobs.

“Trump’s weakest issue is the environment,” Ms. Lake said. “As a Democrat, you’re mobilizing our side, you’re cross-pressuring his voters and you’re talking about the economy and the environment at the same time.”

But Democrats are likely to run into trouble when it comes time to propose serious policy solutions. Already, supporters of the Green New Deal have been met with criticism that the proposal is chiefly a set of broad-strokes outlines, rather than concrete legislative language.

Photo by: Pete Marovich for The New York Times

But it was also hit by a backlash, as Ms. Ocasio-Cortez’s website mistakenly published a draft summary of the document that included contentious provisions not endorsed by those candidates, like language that called for economic security “for all who are unable or unwilling to work.”

Other Democrats shied away, including Ms. Feinstein, who told the group of student protesters, “there’s no way to pay for it,” and “it wouldn’t pass the Senate.”

Mr. Schumer called the episode “a little hiccup, nothing more.”

“Do our Democratic colleagues really support this fantasy novel masquerading as public policy?” Mr. McConnell asked last week on the Senate floor, discussing his plan for the coming vote. “Do they really want to completely upend Americans’ lives to enact some grand socialist vision?”

Mr. Schumer’s plan to protect Democrats from going on the record in support of the Green New Deal is to have all members of his caucus simply vote “present” when Mr. McConnell brings the proposal to the Senate floor.

Mr. Schumer said he would then counter with a more detailed policy solution, but that may prove just as risky. Such a solution to climate change is the same as it was in 2010, when Mr. Obama failed to pass a bill that required polluters to pay for their carbon emissions.

Policy experts say the solution to climate change is still to put a price — ideally, a tax — on carbon dioxide emissions from fossil fuels, essentially creating an energy tax that would raise the price of gasoline and electricity generated from fossil fuels. That idea is likely to remain a tough sell with many voters, even as it energizes the liberal left wing of the Democratic Party.

Veterans of the 2010 debacle say the political risk will not be as great as it was then.

“There has been a lot of change since then,” said Rick Boucher, a former Democratic congressman from a coal-rich quarter of southwest Virginia, whose constituents voted him out of office for backing the Obama-era climate change bill."

Pressed by Climate Activists, Senate Democrats to ‘Go on Offense’ - The New York Times
Posted by John H Armwood II at 7:02 AM