Opinion | What if the Mueller Report Demands Bold Action? - The New York Times 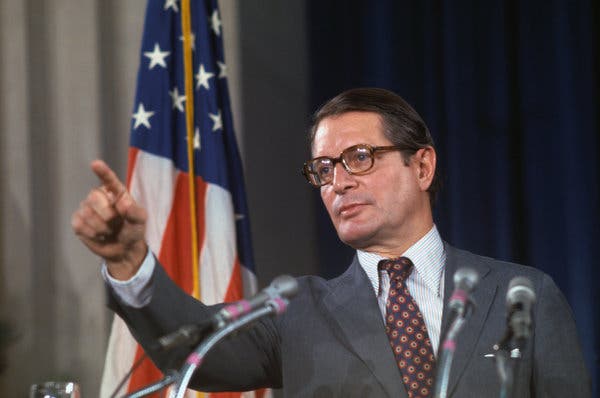 "If Mueller’s findings compel legal action, the attorney general should reconsider the policy against indictment of a sitting president.

Reports that Robert Mueller will soon issue the findings of his investigation have brought a new urgency to the question of whether, assuming sufficient evidence exists, a president can be indicted while in office.

Most people take for granted that both Mr. Mueller and the new attorney general, William Barr, accept the current Justice Department legal position — reached in a 2000 opinion — that a sitting president cannot be indicted. In a June 2018 memo, Mr. Barr said that under “the Framers’ plan,” the “proper mechanism for policing the president’s” actions “is the political process — that is, the People, acting either directly, or through their elected representatives in Congress.”

Yet since 1973, the Justice Department has revisited its position five times on the question of indicting a sitting president and reached different conclusions. In fact, as executive assistant to President Richard Nixon’s attorney general, Elliot Richardson, I can speak to the circumstances that delivered that first opinion: The principal purpose of the 1973 Watergate-era legal opinion — which concluded that a sitting president cannot be indicted — was to aid in removal from office of a criminally tainted vice president, who, the memo concluded, could be indicted.

But it was not intended to set an ironclad precedent that would forever shape how a president might be treated.

My experience makes me believe that Attorney General Barr should reconsider Justice Department policy. If the evidence gathered by the Mueller investigation on the actions of the president and his advisers indicates a crime, an indictment might be the proper course to hold the president accountable. Further, the indictment policy does not stand in isolation: It has repercussions for a Mueller report and access to it for Congress and the American public.

The durability of the Office of Legal Counsel’s 1973 opinion is curious. It was prepared under extraordinarily stressful and unique circumstances — borne from the investigations that led to the resignations of Vice President Spiro Agnew that year and President Nixon in 1974.

In 1973, Vice President Agnew faced a grand jury investigation, mostly stemming from his tenure as governor of Maryland, into alleged bribery, extortion and tax evasion. Mr. Agnew resisted pressure to resign. Attorney General Richardson sought guidance on the indictment question in an effort to bring pressure on the vice president.

When the legal opinion was written, it was a very close question and was ultimately shaped by Mr. Richardson’s goal to remove the vice president from his office. The Office of Legal Counsel determined “there is no express provision in the Constitution which confers such immunity upon the President,” even though Article I, Section 6 provides for limited immunity for members of the legislature. (It also said, in reaching its conclusion, that there were “a number of policy factors that weigh heavily against” indicting a sitting president.)

Following the determination on vice presidents, Mr. Richardson obtained the indictment of Mr. Agnew, and rather than face a prolonged legal battle, the vice president pleaded no contest and resigned in 1973.

An often-overlooked facet of the Agnew case — but highly relevant to our circumstances today — was Mr. Richardson’s insistence that the vice president’s resignation and plea on a single count be accompanied by an extraordinary, publicly available 40-page summary of the criminal behavior involving Mr. Agnew that the Justice Department was prepared to prove at trial. Mr. Richardson believed, correctly, that a full recounting of Mr. Agnew’s shameful behavior would put to rest any contention by his supporters that he had been made a political victim.

Ten days after Mr. Agnew’s resignation, though, Mr. Richardson himself resigned, as part of the events leading up to the Saturday Night Massacre. In an effort to end the Watergate investigation, Mr. Nixon called for the firing of Special Prosecutor Archibald Cox. Mr. Richardson and Deputy Attorney General William Ruckelshaus both resigned rather than carry out that order.

Mr. Richardson, Mr. Cox and their successors also insisted upon access to White House evidence. They deeply appreciated the right and responsibility of Congress to exercise reasonable stewardship regarding the behavior of leadership of the executive branch.

Mr. Mueller’s investigation has brought us to face similar questions of institutional integrity and transparency for the American public. If Mr. Barr determines that Mr. Mueller’s findings compel legal action, he should reconsider the policy against indictment of a sitting president.

But if Mr. Barr holds to the view that a president’s actions should be policed by the political and not criminal process, it will be imperative that he share a Mueller report with Congress and, to the extent practicable, with the public, redacting only information that is classified or otherwise prohibited by statute.

In light of the gravity of our circumstances, it would be timely and appropriate for the Justice Department to reconsider the shaky policy regarding indictability of a sitting president and provide Congress and the public with the Mr. Mueller’s full findings and conclusions. Only through sunlight and transparency can we preserve confidence in our national institutions and leadership."

Opinion | What if the Mueller Report Demands Bold Action? - The New York Times
Posted by John H Armwood II at 6:58 AM