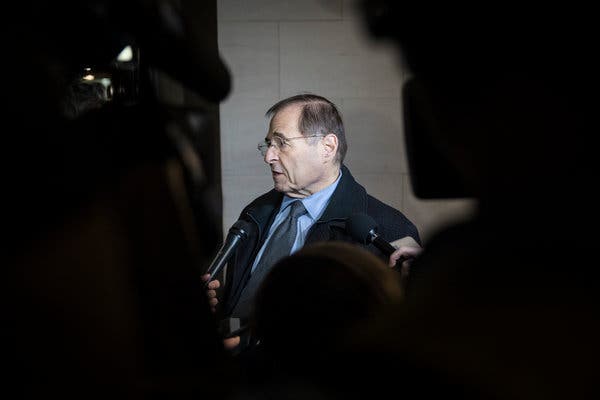 "WASHINGTON — President Trump dismissed on Tuesday an expansive document request by House Democrats scrutinizing whether he obstructed justice or abused power as nothing more than a political sideshow — and he suggested the White House might not cooperate.


Citing 81 document request letters dispatched Monday to Trump associates by the House Judiciary Committee, the president called Democrats’ efforts “a disgrace to our country” and seemingly implied — incorrectly — that President Barack Obama refused to comply with Congress’s demands under similar circumstances.
“Essentially what they are saying is the campaign begins,” Mr. Trump told reporters on Tuesday. “Instead of doing infrastructure, instead of doing health care, instead of doing so many things they should be doing, they want to play games.”
Mr. Trump can instruct executive branch agencies to shield key evidence if he chooses. But it is unlikely that he alone can shake off the dragnet stretched across Trump world by Democrats, most systematically by the House Judiciary Committee this week. Detailed requests were made by the panel’s chairman, Representative Jerrold Nadler of New York, not just to the White House and key government agencies, but to private companies and individuals tied to Mr. Trump’s businesses, campaign and administration. More will follow."