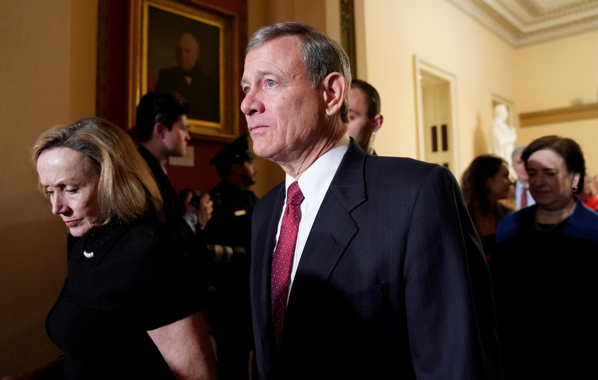 "No, I wasn’t surprised last week, as most people apparently were, when Chief Justice John Roberts cast the deciding fifth vote to preserve access to abortion in Louisiana for at least a little while longer. In fact, I had predicted it (and I have witnesses).

Why? Not because I think the chief justice has developed a soft spot in his heart for the right to abortion. He has not. Not because he wants to minimize the Supreme Court’s role as a combatant in the culture wars. I think he does, but that’s not the point.

Rather, circumstances compelled the chief justice to stand up to a stunning act of judicial defiance.

The phrase summons the image of Gov. George Wallace standing in the schoolhouse door. What Chief Justice Roberts had on his hands was something less tangible but equally threatening to the rule of law: not defiance of judges but defiance by judges.
The voluminous commentary on what happened at the court last week has for the most part not fully conveyed the blatant nature of the lower court’s decision, on which the Supreme Court put a temporary hold to afford the plaintiffs — an abortion clinic and its doctors — the chance to file a formal appeal.

The court is the United States Court of Appeals for the Fifth Circuit, based in New Orleans and covering Texas and Mississippi along with Louisiana. Not surprisingly given its territory, it has been the location of numerous legal battles over abortion. The Trump administration has been spectacularly successful in filling seats on the Fifth Circuit. Five of the 16 active judges are Trump appointees. That places the Fifth Circuit at the leading edge of the coming wave of Trump judges (sorry, Chief Justice Roberts, I’m afraid that’s what they are), so it’s important to understand what is going on there.

The Louisiana law at issue, June Medical Services v. Gee, was enacted in 2014 as the Unsafe Abortion Protection Act. It requires doctors who perform abortions to have admitting privileges at a hospital within 30 miles of the location where they practice.

If this sounds familiar, it’s because it is. Texas had passed the same law, part of the legislative arsenal amassed by a leading anti-abortion organization, Americans United for Life. These laws are enacted with the knowledge that doctors who perform abortions can almost never get admitting privileges, either because of objections to abortion by the hospital or the surrounding community or because so few abortion patients ever need hospitalization that the doctors can’t meet the minimum number of hospital admissions that some credentialing committees require. (It’s 50 per year in the case of one Louisiana hospital, while the doctors involved in the case went years without needing to hospitalize a single abortion patient.) The whole point of these laws is to destroy the abortion infrastructure — in the name of protecting women’s health.

The Texas law, upheld by the Fifth Circuit, succeeded in closing half the abortion clinics in the state before the Supreme Court declared it unconstitutional in Whole Woman’s Health v. Hellerstedt, decided in June 2016 by a vote of 5 to 3. While the Louisiana law was being drafted, one anti-abortion leader in the state observed in an email to the bill’s sponsor that the Texas law was having “tremendous success in closing abortion clinics and restricting abortion access.” In signing the bill into law, Gov. Bobby Jindal declared it part of the effort “to make Louisiana the most pro-life state in the nation.”
Justice Stephen Breyer’s majority opinion in Whole Woman’s Health was a pointed rebuke to the Fifth Circuit for failing to subject the Texas law to adequate scrutiny. The appeals court had simply deferred to the Legislature’s claimed objective of protecting women’s health and had in fact barred any consideration of whether the law would actually do so. In fact, Justice Breyer wrote, the law conveyed minimal if any health benefit and would actually harm women by forcing longer waits and more crowded conditions in the remaining clinics that could meet the needless admitting privileges requirement.

Judge John W. deGravelles of Federal District Court in Baton Rouge applied the reasoning of Whole Woman’s Health in issuing a permanent injunction against Louisiana’s identical law. His ruling followed a six-day trial at which he took testimony on the sustained but fruitless efforts by the doctors to get admitting privileges; evidence on this point takes up 14 of the 63 pages of his opinion, issued in April 2017. Observing that it “provides no benefits to women and is an inapt remedy for a problem that does not exist,” Judge deGravelles concluded that this law, like the Texas law, placed an undue burden on women’s access to abortion.

The Fifth Circuit’s 2-to-1 decision overturning that ruling is a breathtaking piece of work. “We are of course bound by Whole Woman’s Health’s holdings, announced in a case with a substantially similar statute but greatly dissimilar facts and geography,” Judge Jerry Smith wrote for himself and Judge Edith Clement. What can that sentence — indeed, that premise — possibly mean? That Whole Woman’s Health concerned Texas while this case was about Louisiana? That’s like saying that the Supreme Court’s decision in Obergefell v. Hodges, recognizing a constitutional right to same-sex marriage, applied only to male couples and not to lesbians because it was a male couple who brought the case. (It’s worth noting that in the immediate aftermath of Whole Woman’s Health, the Alabama attorney general dropped the state’s appeal of its admitting privileges law, which had been struck down in Federal District Court. “While I disagree with the high court’s decision, there is no good faith argument that Alabama’s law remains constitutional in light of the Supreme Court ruling,” was the state’s lawyer’s honest appraisal of the situation.)

The Fifth Circuit’s contorted explanation for why the Supreme Court’s “close fact-bound balancing analysis” in Whole Woman’s Health wasn’t relevant to Louisiana succeeded only in showing that Louisiana women would in fact be worse off than the women in Texas, where most major cities still have at least one abortion clinic (many Texas clinics did not reopen after the Supreme Court’s ruling). The two judges who formed the Fifth Circuit majority also tried to show that the doctors could have obtained admitting privileges if only they had tried harder, a conclusion flatly refuted by the findings at trial but embraced by Justice Brett Kavanaugh in his opinion last week, dissenting from the Supreme Court’s vote to grant a stay of the Fifth Circuit’s decision. Justice Kavanaugh said the doctors should keep trying.

The dissenter on the Fifth Circuit panel, Judge Patrick Higginbotham, dissected the majority’s opinion and said the appeals court was repeating the very mistakes for which the Supreme Court had called it out in the Texas case. When the full Fifth Circuit took up the question of whether to rehear the case as a full court, six judges said yes and nine said no. Four of the nine were recent Trump appointees (the fifth Trump appointee on the court, Kyle Duncan, was recused). The law was scheduled to take effect last week. It will remain on hold for some months, as least, as the plaintiffs, represented by the Center for Reproductive Rights, file their formal Supreme Court appeal and the state gets the chance to respond.

While it takes the votes of five justices, a majority of the court, to grant a stay, as it did in this instance, adding a case to the court’s docket for a decision on the merits requires only four votes. It’s highly likely the court will grant review; if it doesn’t, the stay dissolves automatically and the law takes effect.

How will the Supreme Court decide the case?Despite my boast at the start of this column, I don’t claim omniscience about what comes next. The chief justice voted to grant the stay, in my estimation, because to have silently let the Louisiana law take effect without Supreme Court intervention would have been to reward the defiance that I’ve described here. When it comes to a full review on the merits, it’s a different game.
Chief Justice Roberts was in dissent in Whole Woman’s Health, along with Justices Samuel Alito and Clarence Thomas (Justice Antonin Scalia having died four months before). The deciding vote in the majority was cast by Justice Anthony Kennedy. Justice Kennedy’s successor, Justice Kavanaugh, chose sides last week. He might have provided some cover for the chief justice, but chose not to. We now know all we need to know about him.

We still don’t know all we would like to know about John Roberts, who remains an ambiguous figure after more than 13 years at the head of the American judicial system. With the lower courts moving rapidly even to his right, and the Trump administration beating at the Supreme Court’s door in one high-profile case after another, Chief Justice Roberts is entering a time of great testing, both of himself and of the institution he heads. Maybe his vote last week was a harbinger. Maybe it will come to be seen as an anomaly. In the space between those two possibilities, the country waits, holding its breath."