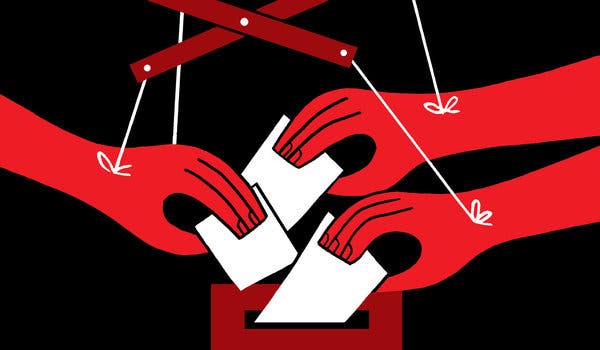 "Memo to President Trump and the Republican Party: This is what actual voting fraud looks like.

L. McCrae Dowless Jr. dispatched minions to collect absentee ballots from voters, fill them in, forge signatures and mail small batches from post offices near voters’ homes to avoid suspicion. Mr. Dowless’s effort is thought to have involved upward of 1,000 absentee ballots or request forms. The candidate he was serving, Mark Harris, has a 905-vote margin over the Democratic contender, Dan McCready.

At a hearing Monday of the state’s election board, its executive director shared the results of an investigation into how Mr. Dowless put together a “coordinated, unlawful and substantially resourced” effort to tamper with absentee ballots.

Witnesses involved in the fraud said Mr. Dowless encouraged them to give false testimony to obstruct the board’s investigation. One, Lisa Britt, who is Mr. Dowless’s former stepdaughter, provided investigators with a script she said Mr. Dowless gave her, which read: “I can tell you that I haven’t done anything wrong in the election, and McCrae Dowless has never told me to do anything wrong, and to my knowledge he has never done anything wrong. But I am taking the Fifth Amendment because I don’t have an attorney, and I feel like you will try to trip me up.”

Ms. Britt and other witnesses are painting a devastating portrait of a political schemer intent on undermining the electoral system.

This alarming situation in North Carolina should prove instructive for Mr. Trump and his party. For years, Republicans have been in a tizzy over voter fraud by noncitizens, which they claim is eating away at American democracy and helping Democrats. But, for some reason, they have been unable to scare up compelling evidence that such fraud exists beyond a handful of cases sprinkled here and there.

Take the recent hullabaloo in Texas. On Jan. 25, the Texas secretary of state sent out a list of 95,000 registered voters who had reportedly been identified as noncitizens. The methodology used to compile the list was opaque, and critics immediately questioned its accuracy. No matter. Republican officials went wild. The state’s attorney general, Ken Paxton, a fierce champion of voting restrictions, tweeted a “VOTER FRAUD ALERT,” claiming that about 95,000 people whom state law enforcement officials have identified “as non-U.S. citizens have a matching voter registration record in TX, approx 58,000 of whom have voted in TX elections. Any illegal vote deprives Americans of their voice.”

Not to be outdone, Mr. Trump flogged the list with characteristic finesse: “These numbers are just the tip of the iceberg. All over the country, especially in California, voter fraud is rampant. Must be stopped. Strong voter ID!”

But, like so many Republican tales of mass fraud, the claims soon crumbled. Within days, the secretary of state acknowledged that his list was chock-full of names improperly flagged for a variety of reasons. Of those people whose names were correctly flagged, it was unclear whether any had voted in a state election.

The Next Wave of ‘Unicorn’ Start-Ups

What’s Next After the Camp Fire Destroyed Paradise

The whole Texas tempest brings to mind the Kansas kerfuffle in which that state’s secretary of state, Kris Kobach, claimed mass fraud as justification for a strict voter ID law that went into effect in 2013. The law was challenged in court, and, last June, was struck down by a federal judge (appointed by President George W. Bush) who ruled that Mr. Kobach had provided “no credible evidence that a substantial number of noncitizens registered to vote,” and noted that “the court draws the more obvious conclusion that there is no iceberg; only an icicle, largely created by confusion and administrative error.”

Outside his home state, Mr. Kobach is best known for having led Mr. Trump’s preposterous voting “integrity” commission, which disbanded after eight months of scrounging, unsuccessfully, for any evidence of widespread fraud.

The current case in North Carolina should be of great interest to Republicans, who have spent much of the last decade dreaming up ways to restrict voting there. Just last year, state Republicans realized their longstanding goal of imposing a photo ID requirement for voting. That law immediately drew multiple lawsuits.

Once the election board wraps up its investigation, its five members — three Democrats and two Republicans — will vote on whether Mr. Harris should be allowed to take his seat or if a new election should be held. Their concern is not whether the candidate had knowledge of what Mr. Dowless was up to, but whether the election was sufficiently tainted to merit a new one. After just the opening day of testimony, the evidence certainly suggests the need for a revote, possibly along with a separate inquiry to determine how much Mr. Harris knew and when he knew it.

Even if the board upholds the election results, the House of Representatives then gets to have its say in the matter, possibly refusing to seat Mr. Harris.

Turns out, voting fraud is as real as Russia’s crusade to put Mr. Trump in the White House. It just looks nothing like what Republicans keep hitting the panic button over. Which tells you even more about Mr. Trump and his party than it does about the so-called perils of voter fraud.

The Times is committed to publishing a diversity of letters to the editor. We’d like to hear what you think about this or any of our articles. Here are some tips. And here’s our email: letters@nytimes.com.

A version of this article appears in print on Feb. 20, 2019, on Page A26 of the New York edition with the headline: Election Fraud the G.O.P. Won’t Stress About. Order "

Opinion | Election Fraud the G.O.P. Won’t Stress About - The New York Times
Posted by John H Armwood II at 7:56 AM