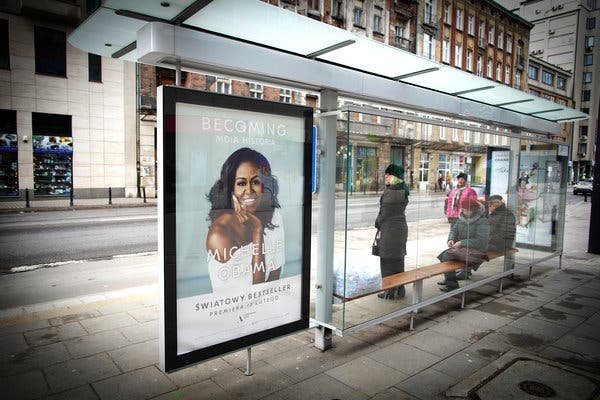 "Why do black people still feel we have to retain white empathy at the expense of being truly empathetic to ourselves?

Michelle Obama was the highest-profile black American woman in the world for eight years. A poster advertising her memoir, “Becoming,” is seen in Warsaw earlier this month.

I happened to be finishing Michelle Obama’s memoir, “Becoming,” during her recent surprise appearance at the Grammys. She gave a short speech about music bringing people together — “whether we like country, or rap or rock, music helps us share ourselves,” she said. The timing felt appropriate — it’s Black History Month, and although the Obamas are now ensconced in that history, we are only beginning to truly examine their legacy.

Let me stress that I like Mrs. Obama. I very much identify with her. I, too, was born in the ’60s and grew up working class in a black family that saw higher education as the way forward. What’s always interested me about Mrs. Obama is how she created a modern narrative of black womanhood just by being herself. The most notable accomplishment of her memoir is that she shows how being consciously black and being an individual are not incompatible, but an ordinary state of being.

She is a soldier in the racial struggles that engage all black folks, but at the same time she is human — vulnerable, uncertain, thrilled to be in love, anxious to be liked. She is, for a time, comfortably middle class, too, which may be the most radical part of this narrative, because black folks who acquire money and prestige are assumed not to have any problems worth serious consideration (they are not, in other words, authentically black). Not so.

And yet reading “Becoming” made me realize, with a sinking heart, how much further we have to go before we routinely hear the whole story about black people's experience.

This becomes clear in those brief parts of the book that address two of the most controversial moments of the 2008 presidential campaign: Mrs. Obama’s remark on the campaign trail that “for the first time in my adult life I’m really proud of my country,” and the sermon by the Obamas’ longtime pastor, the Rev. Jeremiah Wright Jr., that the media boiled down to the epithet “God damn America.”

In the first case, Mrs. Obama maintains that she meant nothing racial, that she was not being unpatriotic, merely expressing gratitude for the volunteers and good energy of the campaign. In the second case, she condemns Mr. Wright as expressing a racial paranoia that exists on both sides of the color line — “the suspicion and stereotyping ran both ways,” is how she puts it — implying a kind of false equivalency that permeates our politics, especially around race. She dismisses such suspicion in her own relatives, who have lived through segregation and Jim Crow, as so much “cranky mistrust.”

That’s it? After giving the story of black people such loving examination, Mrs. Obama strategically shuts it down. She cannot or will not acknowledge how any black person voicing pride in country for the first time makes perfect sense. She cannot or will not acknowledge that Mr. Wright’s critique of America was part of the liberation theology tradition that includes Martin Luther King Jr., a great patriot.

The Rev. Jeremiah Wright Jr. speaking to his congregation at the Trinity United Church of Christ in Chicago in 2006.

More important, these are critiques I’ve heard in many forms from ordinary black people. I can’t imagine Mrs. Obama hasn’t heard them, too, and doesn’t understand exactly where they come from.

The point is not that she has to completely agree with Mr. Wright. But in her disavowals, she’s making a political choice — not surprising, given the book and other projects that hinge on her popularity and “relatability.” That’s what’s so dismaying. As the highest-profile black American woman in the world for eight years, as a towering first, she has a rare chance — an obligation, in my mind — to broaden the national narrative of exclusion from a story of black striving and overcoming to a story of black discontent. That would be much more meaningful than any feel-good awards-show speech about the “unifying power of music.”

She could at least give our discontent the same consideration she gives to Iowa voters and military families and other groups whom she describes as having opened her eyes to the deepest meanings of being American. But we don’t get that here. Once again we are denied our fullness because of a (justified) fear it will be interpreted as anti-American. Mrs. Obama still follows the rule of assimilation: It’s more important to retain white empathy than to be truly empathetic to ourselves.

Mrs. Obama writes at one point that as a black first lady, her “grace would need to be earned.” She’s talking again about those rules of assimilation, of that familiar burden of having to be three times as good to even be given a chance. (This, of course, is a truth built into the whole phenomena of Black History Month.) Too bad she doesn’t add that, in their incredible forbearance, black Americans earned their grace long ago, as well as their residual resentments and frustrations built up over 400 years, which are dismissed by the mainstream as anger or crankiness.

Mrs. Obama does get it right in the title: More of the story of black Americans is being told than ever before, but there is still so much left out, often deliberately. It — and we — are still becoming."