Opinion | Calamity at a Brooklyn Jail - The New York Times 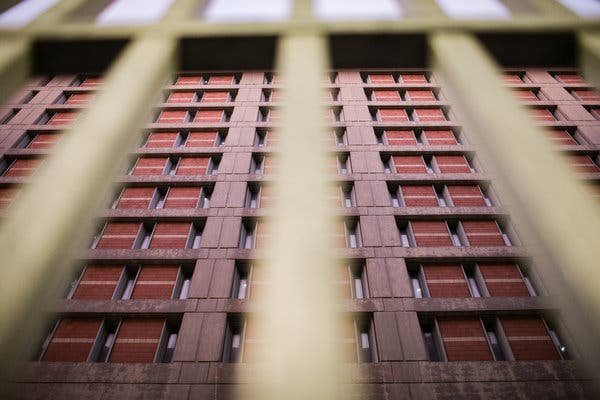 "A vivid display of the Trump administration’s callousness toward vulnerable people.

The Metropolitan Detention Center in Brooklyn, where inmates had been forced to remain in their cells without reliable heat, hot food or showers for the better part of a week.

Photo by: Stephen Speranza for The New York Times

Locked away in dark and freezing cells with little heat for days, left to languish alone in the dead of winter — this is how the federal government of the United States thinks that it can treat the people in its care.

No, this isn’t some C.I.A. black site overseas. It is a federal detention center in Brooklyn, where inmates were being held in abominable conditions in America’s largest city.

Representative Jerrold L. Nadler, after touring the Metropolitan Detention Center in the Sunset Park neighborhood of Brooklyn on Sunday, reported that it was much warmer, and power would be restored on Monday. But this after some 1,600 inmates had been forced to remain in their cells without reliable heat, lights, hot food or showers for the better part of a week, a week of freezing temperatures.

Inmates told local elected officials — who after demanding to be let in, toured the facility Saturday — that they had been on lockdown in their cold cells for days. Jail officials told the visiting lawmakers that a power outage sparked by a fire had made it unsafe to allow the prisoners out of their cells. Visiting hours and communication with family members were also cut off.

The wider public only learned of the horrific conditions at the detention center thanks to the family members of those incarcerated at the jail and the tireless group of public defenders in this city who represent them. It took a court order before the legal advocacy group Federal Defenders of New York was allowed to enter the facility on Friday. David Patton, the group’s executive director, described the inmates as “scared and frantic,” and as having “no idea if the outside world knows what’s going on with them.”

The federal officials in charge of the jail have responded to concerns about the welfare of their charges with little more than a shrug, even initially rejecting the city’s offer to send emergency generators and blankets to the facility, according to Mayor Bill de Blasio’s Twitter feed.

Councilman Brad Lander, who visited the jail on Saturday, said the warden and facilities manager were dismissive about concerns over the welfare of inmates. They told Mr. Lander and his colleagues that a contractor working on the electrical system had gone home for the day and couldn’t return until Monday.

The Federal Bureau of Prisons said in a statement Saturday night that “a work ticket has been submitted by the electrical contractor to schedule a work crew to restore power to the new temporary service switch,” and they hoped electrical service would be restored by Monday. They said the inmates had access to hot showers and hot water in their cells, and that medical attention was continuing to be provided. They offered no acknowledgment of the human suffering they had caused when they failed to do their jobs.

The history of abuses in federal jails, prisons and detention centers, whose populations are disproportionately black and Hispanic, long predates the Trump administration — and rarely draws much attention. Maybe current officials thought they could treat people callously at the Metropolitan Detention Center because they were mostly poor, and black and brown.

Maybe they assumed no one would notice or care.

Not this time. Once news of the prisoners’ plight spread on Friday, New Yorkers in large numbers showed up at the jail to protest. Politicians like Mr. de Blasio and Mr. Lander rallied to the inmates’ cause. “Just because you’re incarcerated does not mean that we don’t treat you with dignity and respect,” Mr. Nadler tweeted. “Heat and hot water is not a luxury.”

He is, of course, right. (Though one is forced to wonder whether the mayor also plans to send blankets to the 10,000 residents of public housing in the city without heat.)

The prisoners, who could see the protest from their cells, responded by banging against the metal bars on their windows, a haunting call and response that hinted at the mass of humanity inside, and out."

Opinion | Calamity at a Brooklyn Jail - The New York Times
Posted by John H Armwood II at 7:06 AM