Poverty in America is a moral outrage. The soul of our nation is at stake. If we are to save the soul of this country from the poverty that is killing us, we must act, we must agitate, we must cause some righteous trouble | Rev William Barber and Rev Liz Theoharis | Opinion | The Guardian 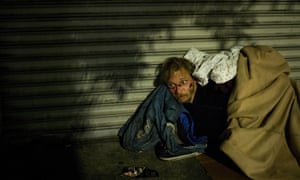 "In March of 1968, as part of a tour of US cities to shine a light on poverty and drum up support for the recently-launched Poor People’s Campaign, the Rev Dr Martin Luther King Jr visited the northwest Mississippi town of Marks. He saw a teacher feeding schoolchildren a meager lunch of a slice of apple and crackers, and started crying.

Earlier this month, officials from the United Nations embarked on a similar trip across the US, and what they observed was a crisis of systemic poverty that Dr King would have recognized 50 years ago: diseases like hookworm, caused by open sewage, in Butler County, Alabama, and breathtaking levels of homelessness in Los Angeles’ Skid Row, home to 55,000 people.

“I think it’s very uncommon in the first world,” UN special rapporteur Philip Alston said. “This is not a sight that one normally sees. I’d have to say that I haven’t seen this.”

The morally troubling conditions Dr King witnessed across the country cemented his call, along with leaders in the labor movement, tenant unions, farm workers, Native American elders and grassroots organizers, for a campaign to foster a revolution of values in America.

Half a century later, the conditions that motivated the 1968 Poor People’s Campaign have only worsened, making the need for a new moral movement more urgent than ever. Compared to 1968, 60% more Americans are living below the official poverty line today – a total of 41 million people. The gap between our government’s discretionary spending on the military versus anti-poverty programs has grown from two-to-one at the height of the Vietnam war to four-to-one today.

That’s why, this month, poor and disenfranchised people along with clergy and moral leaders nationwide launched the Poor People’s Campaign: a National Call for Moral Revival, to challenge the enmeshed evils of systemic racism, poverty, the war economy, ecological devastation, and our distorted national morality.

The observations by the United Nations published this week are an urgent alarm bell for the moral emergency facing the country. As King did 50 years ago and Alston did earlier this month, we will travel the country to make sure the poor are not ignored. But it is not enough to bear witness. If we are to save the soul of this country from the poverty that is killing us, we must act, we must agitate, we must cause some righteous trouble.

The Poor People’s Campaign: A National Call for Moral Revival, which will be highlighted by 40 days of direct action and nonviolent civil disobedience this spring, is not a commemoration. It’s an acknowledgment that, 50 years later, there is still so much work to do to foster a revolution of values in America.

There’s a strange irony in America when it comes to poverty. The states with the highest poverty rates are in the south. And those same states have the highest rates of voter suppression of black people. Through this racialized voter suppression, politicians who support policies that hurt the poor get elected. While a larger percentage of black people are living in poverty, in raw numbers, there are actually more white than black people below the poverty line.

So-called white evangelicals are omnipresent in the poorest areas of our country, and they say the least about systemic poverty, which is the foremost issue in authentic Christian religious theology. After our denominations splintered over the moral question of slavery and the nation stood on the brink of civil war, Frederick Douglas said, “Between the christianity of this land and the christianity of Christ, I recognize the widest possible difference.”

These so-called evangelicals should listen to Pope Francis, who called poverty a “scandal.” He said, “In a world where there is so much wealth, so many resources to feed everyone, it is unfathomable that there are so many hungry children, that there are so many children without an education, so many poor persons. Poverty today is a cry. We all have to think if we can become a little poorer, all of us have to do this. How can I become a little poorer in order to be more like Jesus, who was the poor Teacher?”

The most radical, progressive shifts in our country’s history occurred when concerned citizens across racial lines come together. This was the case after the civil war, during the civil rights movement and today, in the Moral Mondays Movement and the Fight for $15.

The Poor People’s Campaign: A National Call for Moral Revival will unite Americans across all races, creeds, religions, classes and other divides – because it’s going to take all of us to revive the soul of our nation."

The Reverend Dr William Barber and the Reverend Dr Liz Theoharis are co-chairs of The Poor People’s Campaign: A National Call for Moral Revival

Poverty in America is a moral outrage. The soul of our nation is at stake | Rev William Barber and Rev Liz Theoharis | Opinion | The Guardian
Posted by John H Armwood II at 9:54 PM