What Happened to Hu Jintao?

What Happened to Hu Jintao?

“It was the lone disruption in one of the most closely choreographed events in China: The country’s former top leader, Hu Jintao, was suddenly led out of the closing ceremony of the Chinese Communist Party’s twice-a-decade congress.

The congress, where China’s next leaders are anointed, is the single most important political event for a ruling party fixated on control. Every detail, whether it is the outcome of its elections or how servers pour tea, is planned.Nothing unscripted happens. Nothing unscripted is allowed to happen.

Except this year, it did.

The roughly 2,000 delegates to the congress had just cast ballots for the party’s prestigious Central Committee. Then, two men led Mr. Hu — who appeared reluctant to go — out of Beijing’s Great Hall of the People.

The moment, captured on video by journalists who had been allowed into the hall minutes earlier, prompted questions and wild speculation. Was Mr. Hu, 79, suffering from poor health, as Chinese state media would later report? Or was he being purged in a dramatic show by China’s current leader, Xi Jinping, for the world to see?

“This was an astonishing episode — even during the Mao period, you didn’t see a dramatic disruption of the congress like this,” said Victor Shih, a specialist in Chinese politics at the University of California at San Diego.

The world may never know the answer, given the utter secrecy around Chinese high politics. But a deconstruction of video footage provides additional details and context about the much-scrutinized moment.

In the minutes before Mr. Hu is led away, he appears to be reaching for a document on the table, where the top leaders and retired elders of the party preside.

The New York Times; video by CNA via Reuters

The man to his left, Li Zhanshu, the party’s now outgoing No. 3 official, quickly intervenes, covering it with a red folder. He later slides the document away, speaking into Mr. Hu’s ear.

It’s unclear what the document was, but all the officials appeared to have papers. A photo of one of the pages, taken later, seems to show that it was a list of names, with the words “Central Committee.” 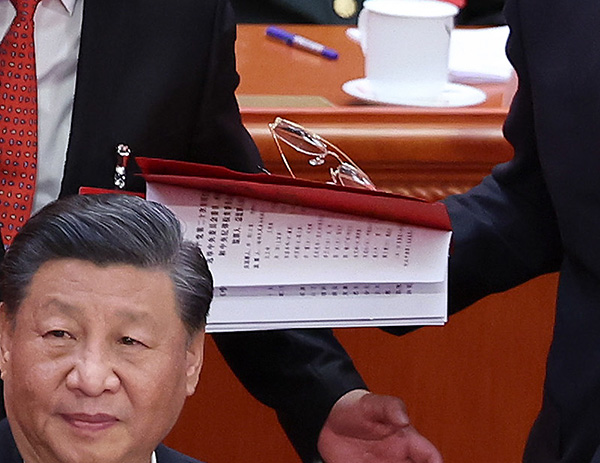 The congress was about to announce the new Central Committee, which would make clear that Mr. Xi had pushed out perceived moderates in favor of loyalists. The party’s top leaders and retired elders historically have a great deal of influence over the selection.

The delegates had not yet voted on amendments to the party constitution, approving Mr. Xi’s report on the progress of the previous five years, or a report on internal party discipline. The amendments, revealed later, reaffirmed Mr. Xi’s importance as the “core” of the party.

Previous party meetings have been stages for political maneuvering and the humiliation of former leaders. In 1959, the party formally adopted a resolution denouncing Peng Dehuai, a high-ranking military official, after he criticized Mao Zedong’s economic policies. During the Cultural Revolution, many leaders, including Mr. Xi’s father, Xi Zhongxun, were purged or publicly shamed. But those moments predated the internet age, and were clearly intentional. 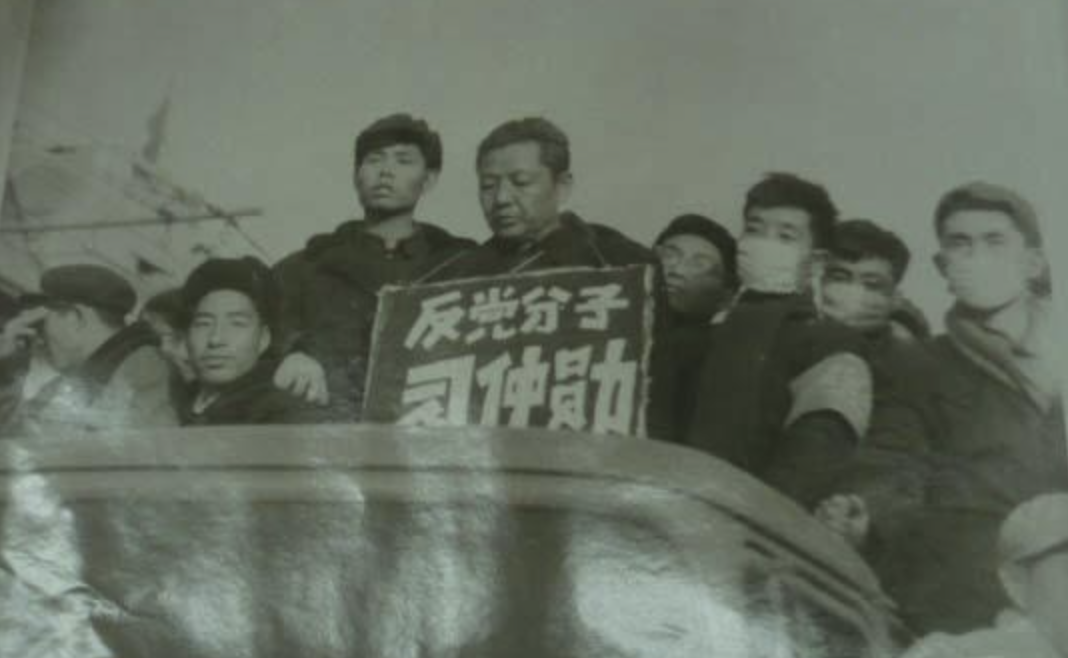 It’s far from evident that Mr. Hu’s exit was planned, and many analysts have warned against drawing assumptions. The apparent chaos of the following moments led many to read the scene as unscripted.

Mr. Xi glances toward one side of the hall. An aide then comes over to Mr. Xi, who addresses him and taps a piece of paper. The aide bends over to say something to Mr. Hu — who had been watching the previous exchange out of the corner of his eye, seemingly listening.

As Mr. Xi looks on, the aide grasps Mr. Hu’s right arm, as if trying to get him out of his seat. Mr. Hu pulls his arm back. The man tries to lift the former top leader from behind, under both arms, but again fails.

Mr. Hu then reaches for the paper in front of Mr. Xi, which the top leader holds down.

When the aide finally succeeds in coaxing Mr. Hu from his chair, Mr. Li, the No. 3 official, half-rises from his seat and appears to be moving to engage in the situation. Another official — Wang Huning, the party’s then-No. 5 leader — tugs Mr. Li back down.

The New York Times; video by CNA via Reuters

Mr. Li and Mr. Wang represent a changing of the guard at the apex of power in China — the Politburo Standing Committee that was unveiled the next day. 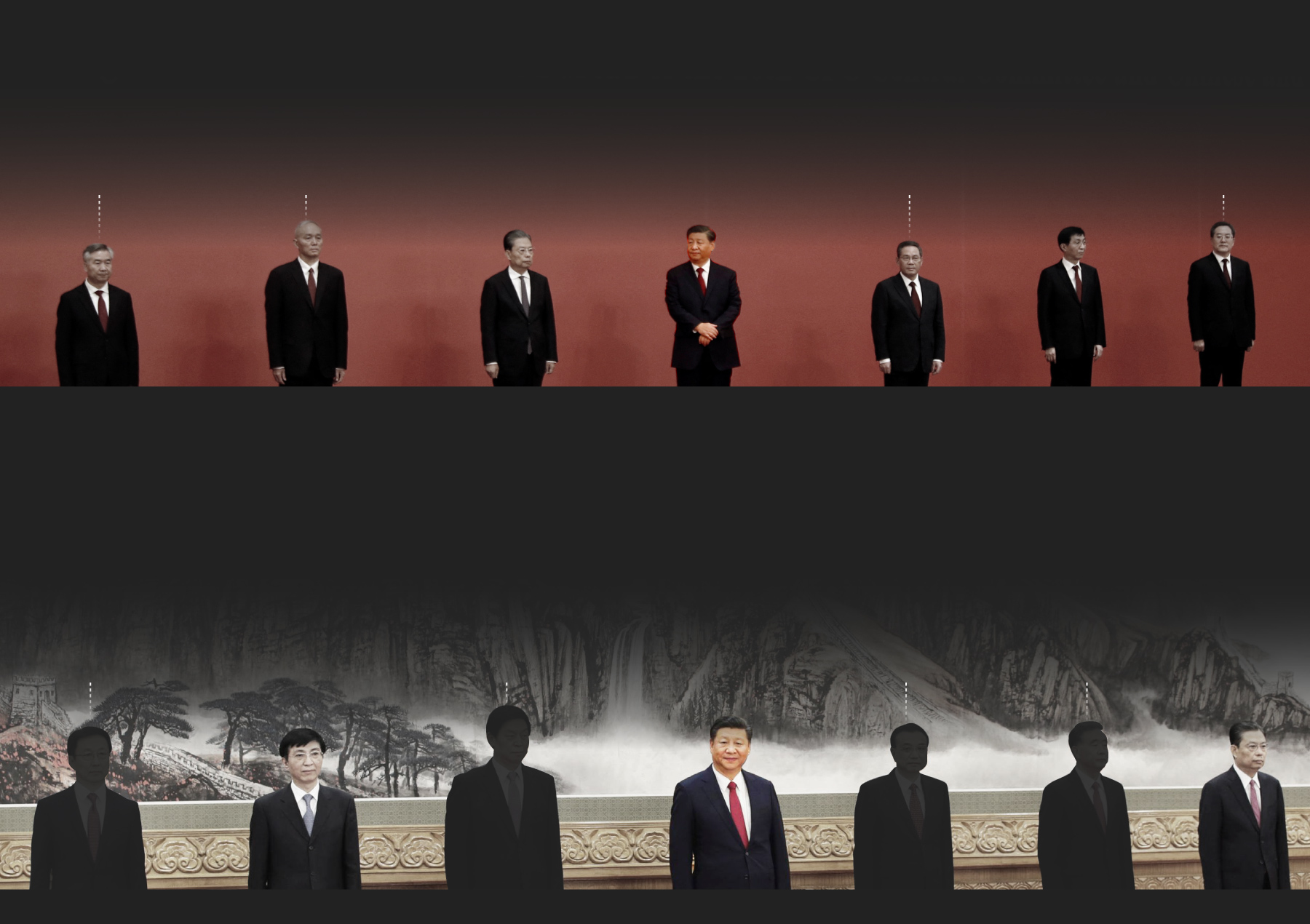 Mr. Xi appointed allies who are too old or inexperienced to take over for him.

Some members who were seen as less close to Mr. Xi retired early.

Mr. Li had reached retirement age, and was leaving. Mr. Wang is the party’s chief theoretician and has served as an ideological adviser to both the current and former leader; he was promoted at this congress to the No. 4 spot, and is seen as close to Mr. Xi.

With the Politburo Standing Committee now filled with his allies, Mr. Xi will face little resistance to his agenda, which includes bolstering national security and reshaping the global order to better suit Beijing’s interests. None of the new leaders have the experience or are young enough to be considered potential successors to Mr. Xi.

As the two aides begin guiding Mr. Hu away from his seat, the older leader stops to say something to Mr. Xi. Mr. Xi nods briefly, without fully turning to look at him.

Mr. Hu then pats Li Keqiang, China’s premier, on the shoulder. Mr. Li nods, too, but also does not fully turn around.

The premier has long been seen as an ally and protégé of Mr. Hu. He climbed the party’s ranks in part through his leadership roles in the Communist Youth League, a party organization that Mr. Hu once headed.

At least two other people seated at the front table have longstanding associations with Mr. Hu. Wang Yang and Hu Chunhua — the outgoing No. 4 party member and a Chinese vice premier, respectively — were also affiliated with the Communist Youth League.

The new lineup of top officials unveiled the next day excluded those three perceived protégés of Mr. Hu, breaking with a tradition of balancing different party factions in the leadership.

As Mr. Hu is escorted out of the hall, he passes behind 19 other high-ranking party officials seated at the same long table.

Almost none of them give any indication that anything out of the ordinary is occuring. A few are engaged in conversation. Most stare straight ahead. 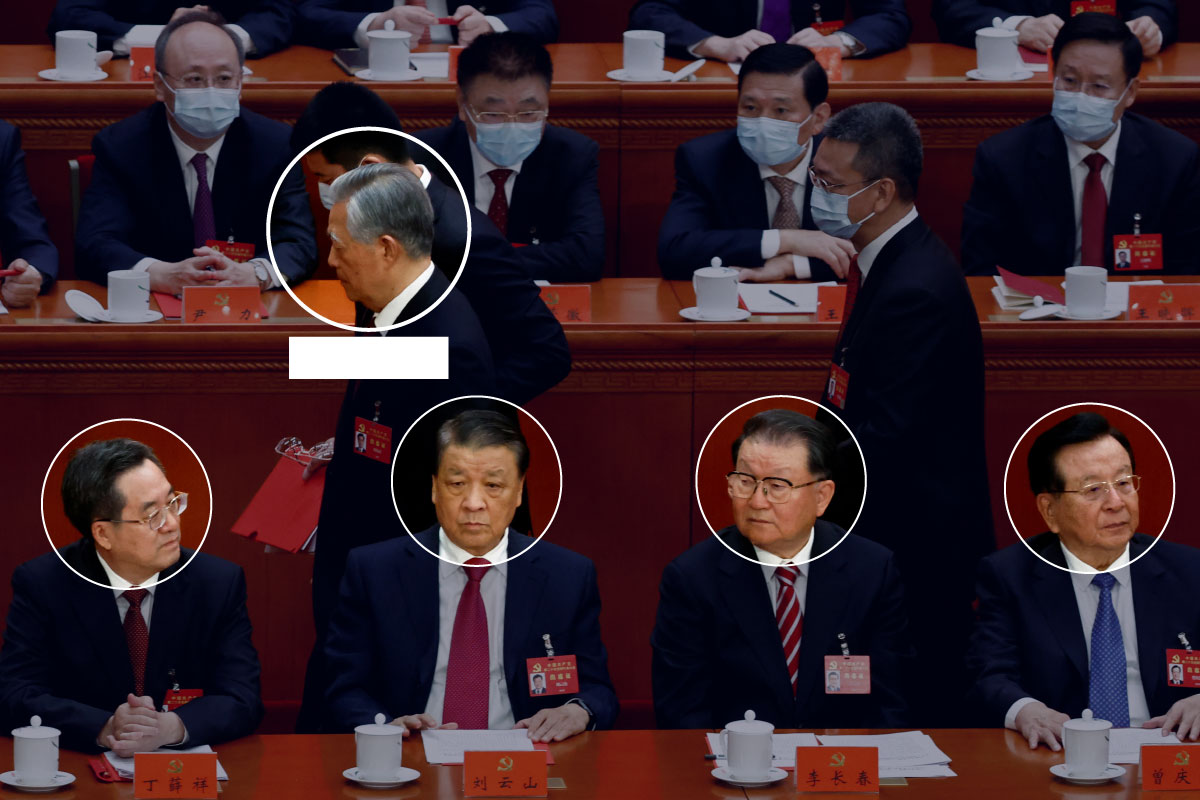 EXPRESSIONS DID NOT CHANGE

Wu Guoguang, a professor at the University of Victoria in Canada who served as an adviser to a former premier of China, said he did not want to speculate about what had unfolded. But he said he was astounded by the officials’ chilly reaction.

“Here was Hu Jintao, the former highest leader of your party and a man who had given so many of you political opportunities. And how do you treat him now?” Professor Wu said in a podcast interview with the Times columnist Li Yuan. “This incident demonstrated the tragic reality of Chinese politics and the fundamental lack of human decency in the Communist Party.”

After Mr. Hu’s departure, the closing ceremony proceeded, with his empty front-row seat the only reminder of the disruption. To most people in China, the whole episode might never have happened. Chinese censors limited search results for Mr. Hu’s name on social media to posts from official accounts, none of which mentioned his exit. The state broadcaster’s news program that night showed footage of Mr. Hu voting, and then his empty seat later in the ceremony, without explanation.

Late Saturday evening, Xinhua, the state news agency, offered the first official acknowledgment of his exit, writing on Twitter that Mr. Hu was “not feeling well” and had been taken to rest. “Now, he is much better,” the post read. But Twitter is blocked in China, and neither Xinhua nor any other official news outlet posted a similar explanation within China’s internet firewall, further fueling speculation about the incident.

Regardless of what happened, the symbolism was unmistakable. A former paramount leader, historically the only person with the stature to challenge a current one, was led offstage.

That left only one man in the spotlight: Mr. Xi, about to glide to his third term, the most powerful Chinese leader in decades. 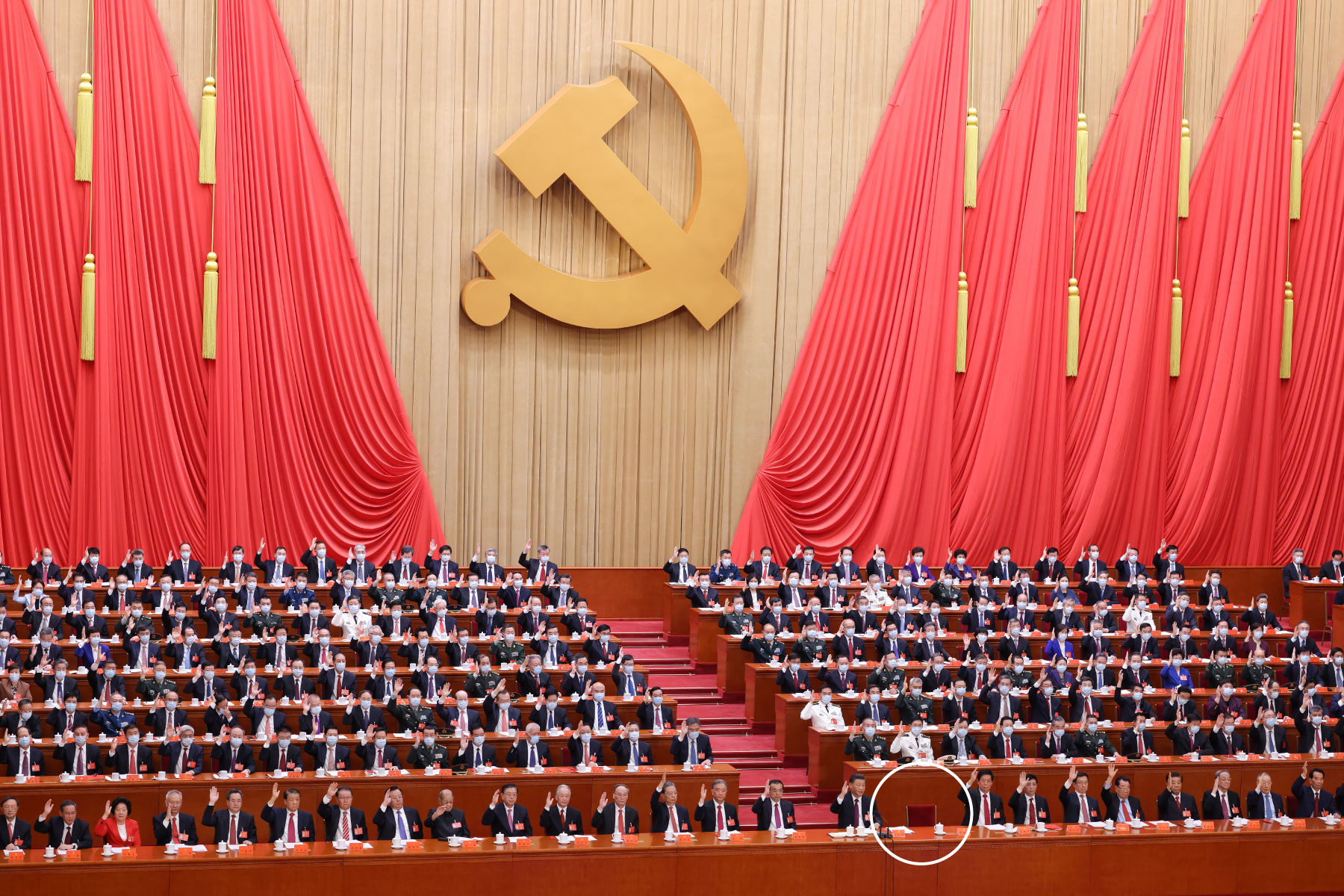