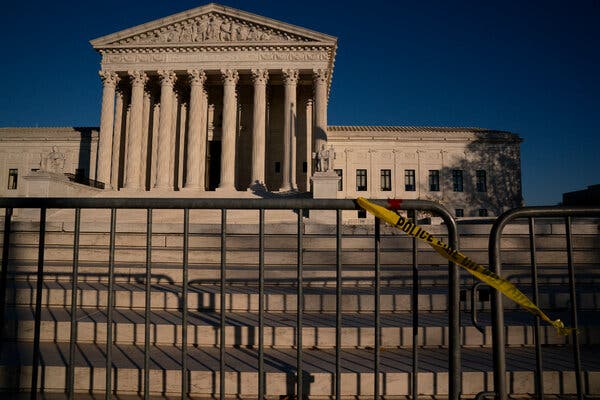 "Supreme Court Takes Up Trump Plan to Exclude Unauthorized Immigrants in Redistricting
The administration’s efforts, which are subject to practical hurdles, would upset a constitutional consensus and could shift political power from Democratic states to Republican ones.
By Adam LiptakNov. 30, 2020Updated 10:05 a.m. ET
WASHINGTON — The Supreme Court will hear arguments on Monday on President Trump’s efforts, in the final days of his presidency, to exclude unauthorized immigrants from the calculations used to allocate seats in the House.
If the court rules for the administration, it would upend the agreement that the census must count all residents, whatever their immigration status, and could shift political power from Democratic states to Republican ones.
But the case is riddled with practical complications. Census Bureau officials have said they cannot produce the required data until after Mr. Trump leaves office in January. Even if they do, it is not clear that congressional officials would accept what they may view as flawed calculations, and President-elect Joseph R. Biden Jr. may try to reverse course once he takes office, prompting further litigation.
The core question in the case — who counts for purposes of congressional reapportionment — is fundamental and largely untested.
The Constitution requires congressional districts to be apportioned “counting the whole number of persons in each state,” using information from the census. To that end, a federal law requires the president to send Congress a statement setting out the number of representatives to which each state is entitled after each decennial census. In the past, those statements have been based on a count of all residents.
In July, Mr. Trump issued a memorandum taking a new approach. “For the purpose of the reapportionment of representatives following the 2020 census,” the memo said, “it is the policy of the United States to exclude from the apportionment base aliens who are not in a lawful immigration status.”
“Current estimates suggest that one state is home to more than 2.2 million illegal aliens, constituting more than 6 percent of the state’s entire population,” the memo said, apparently referring to California. “Including these illegal aliens in the population of the state for the purpose of apportionment could result in the allocation of two or three more congressional seats than would otherwise be allocated.”
Removing undocumented immigrants from the count would most likely have the effect of shifting seats to states that are older, whiter and typically more Republican.
Mr. Trump ordered Wilbur Ross, the secretary of commerce, to provide him with two sets of numbers, one including unauthorized immigrants and the other not. It was not clear how Mr. Ross would derive the second set of numbers, as last year the Supreme Court rejected his efforts to add a question on citizenship to the census.
The case before the court, Trump v. New York, No. 20-366, was brought by two sets of plaintiffs, one a group of state and local governments and the United States Conference of Mayors, and the second a coalition of advocacy groups and other nongovernmental organizations.
A three-judge panel of the Federal District Court in Manhattan ruled that the new policy violated federal law. Two other courts have issued similar rulings, while one said the dispute was not ripe for consideration.
In an unsigned opinion in the case from Manhattan, the panel said the question before it was “not particularly close or complicated.”
“The secretary is required to report a single set of figures to the president — namely, ‘the tabulation of total population by states’ under the ‘decennial census’ — and the president is then required to use those same figures to determine apportionment using the method of equal proportions,” the panel wrote, quoting the relevant statutes.
Much of the panel’s opinion concerned whether the plaintiffs had suffered the sort of injury that gave them standing to sue. It concluded that the new policy made it less likely that undocumented immigrants and others would participate in the census, harming its accuracy.
But the counting is over, and that theory of standing is now open to question. In the Supreme Court, the plaintiffs argued that they also had standing because they would be hurt by the revised apportionment. Jeffrey B. Wall, the acting solicitor general, responded that this second theory was speculative and premature, as Mr. Trump has not acted.
On the core question in the case, the administration told the justices that the term “persons in each state” can be understood to require “a sovereign’s permission to remain within the jurisdiction.”
In response, Barbara D. Underwood, New York’s solicitor general, representing state and local governments, said the administration was asking the court to endorse a stunning departure from the nation’s traditions. “Since the founding,” she wrote, “the population base used to apportion seats in the House of Representatives has never excluded any resident based on immigration status.”
In a separate response, groups represented by the American Civil Liberties Union said the administration’s new policy violated the federal statute and the Constitution.
“The president does not have ‘discretion’ to pencil out persons included in the actual enumeration to create a separate apportionment base of his own liking,” the brief said."
Supreme Court Takes Up Trump Plan to Exclude Unauthorized Immigrants in Redistricting
Posted by John H Armwood II at 10:19 AM