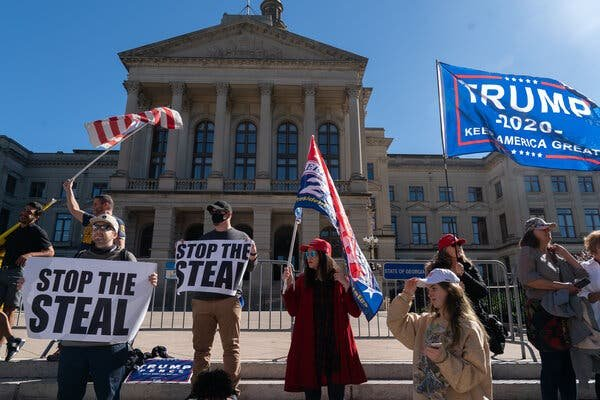 "Donald Trump is exiting political life much the same way he entered it, pushing conspiracy theories for personal gain. Now, as then, these aren’t just any old conspiracy theories, but ones that hinge on the fundamental illegitimacy of a whole class of Americans.

Trump made his first serious foray into national politics with “birtherism,” the conspiracy theory that Barack Obama was born outside the United States, making him an illegal president. It was a public expression of Trump’s belief that citizenship is tied to blood and ethnicity — that some Americans are Americans, some are less so and some just aren’t.

The voter fraud conspiracy to which Trump hitched his attempt to hold onto power falls under the same umbrella, an attempt to write millions of Americans out of the electorate on the basis of race and heritage, instead of just one person out of the office of the presidency.

The essence of the campaign’s legal and political argument, after all, is that Trump won the election, or would have, if not for mass electoral fraud, all in swing states and only then in those cities with sizable Black populations, specifically Atlanta, Detroit, Milwaukee and Philadelphia. To right the ship, his campaign asked various courts to toss out votes in these cities, invalidating hundreds of thousands of Black votes to hand the president a second term.

Here is Rudy Giuliani saying exactly this without shame or embarrassment at a news conference last week:

The margin in Michigan is 146,121 and these ballots were all cast basically in Detroit that Biden won 80-20. So you see it changes the result of the election in Michigan if you take out Wayne County. So it’s a very significant case.

The Trump movement has never been about “populism” or “nationalism” or the interests of working Americans. It has always and only been about the contours of our national community: who belongs and who doesn’t; who counts and who shouldn’t; who can wield power and who must be subject to it.

And the answers, no matter how much the president’s defenders and apologists pretend otherwise, have race at their core. Yes, Trump will take support from anyone who wants to give it to him, but the Americans that matter — whose votes must be counted, whose wishes must be heard, respected and fulfilled — are the white ones, and of them, only a subset.

I call this “Trumpism,” but none of this began with the president. Trump did not force the Republican Party in Michigan and Wisconsin to create districts so slanted as to make a mockery of representative government in their states; he did not tell the North Carolina Republican Party to devise and pass a voter identification bill targeting the state’s Black voters for disenfranchisement with “surgical precision”; he didn’t push Republican election officials in Georgia to indiscriminately purge their voter rolls or pressure Florida Republicans into practically nullifying a state constitutional amendment — passed by ballot measure — to give voting rights to former felons.

The Republican Party’s contempt for democracy and embrace of minoritarian rules and institutions predate Trump and will continue after he leaves the scene. It does not seem to matter that Republicans can clearly compete and win in high turnout elections since hostility to democratic participation has become as much a part of the party’s identity as its commitment to low taxes and so-called small government.

What does this mean for the future of our politics? In the near-term, the president’s haphazard attempt to nullify the election is probably the start of a new normal, in which it is standard procedure for Republican politicians to allege fraud and challenge the results, tying the outcome up in federal court until it’s either untenable — or somehow successful. And even if it doesn’t work, the attempt still stands as a ritual affirming the belief that some Americans count more than others, and that our democracy is legitimate only insofar as it empowers the people, narrowly defined, over the mere majority.

In “Talking to Strangers: Anxieties of Citizenship Since Brown v. Board of Education,” the political theorist Danielle S. Allen observes that

An honest account of collective democratic action must begin by acknowledging that communal decisions inevitably benefit some citizens at the expense of others, even when the whole community generally benefits.

The hard truth of democracy is that some citizens are always giving things up for others. Only vigorous forms of citizenship can give a polity the resources to deal with the inevitable problem of sacrifice.

What if the thing we need some citizens to give up is a sense of superiority, a sense that they are — or ought to be — first among equals? And what if they refuse? What do we do about our democracy when one group of citizens, or at least its chosen representatives, rejects the egalitarian ideal at the heart of democratic practice?

These aren’t new questions in American history. But unless we plan to recapitulate the worst parts of our past, we will have to come up with new answers."