Opinion | America Is Letting the Coronavirus Rage Through Prisons 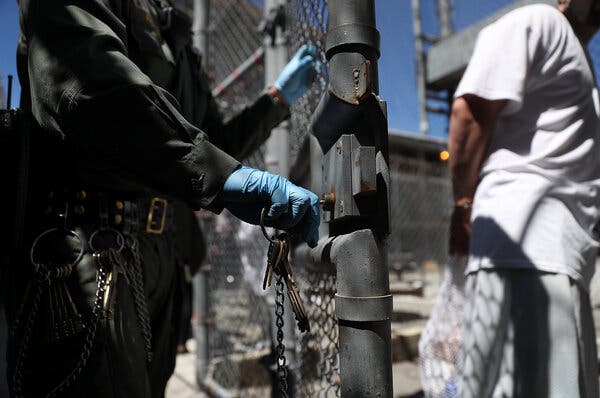 America Is Letting the Coronavirus Rage Through Prisons

It’s both a moral failure and a public health one.

"As Americans grapple with how — or whether — to gather with loved ones this holiday season, the roughly two million people confined in the nation’s prisons and jails face an even grimmer challenge: how to stay alive inside a system being ravaged by the coronavirus pandemic.

Like the nation overall, U.S. correctional facilities are experiencing record spikes in coronavirus infections this fall. During the week of Nov. 17, there were 13,657 new coronavirus infections reported across the state and federal prison systems, according to the Marshall Project, which has been tracking these numbers since March. The previous week saw 13,676 new cases. These are by far the highest weekly tolls reported since the pandemic began. With winter descending, the situation threatens to grow bleaker still.

The American penal system is a perfect breeding ground for the virus. Squabbles over mask wearing and social distancing are essentially moot inside overcrowded facilities, many of them old and poorly ventilated, with tight quarters and with hygiene standards that are difficult to maintain. Uneven testing, inadequate medical resources and the constant churn of staff members, visitors and inmates further speed transmission. Crueler still, inmates suffer disproportionately from comorbidities, such as high blood pressure and asthma, putting them at an elevated risk for complications and death.

Eight months into the pandemic, the precise shape and scope of the devastation remains difficult to pin down. But the available data is heartbreaking. As of mid-November, more than 196,600 coronavirus infections had been reported among state and federal prisoners. More than 1,450 of those prisoners had died. The case rates among inmates are more than four times as high as those of the general public, and the death rate is more than twice as high.

Inmates are not the only ones trapped with the virus. The correctional system employs more than 685,000 people — guards, nurses, chaplains and so on. There have been more than 45,470 reported coronavirus infections and 98 deaths among staff members to date. Their case rates are three times as high asfor the general public.

Remember: These are the reported cases. The real numbers are assumed to be higher. The virus ripples outward from these hot spots, engulfing the families and communities of inmates and workers. The coronavirus does not respect prison walls any more than it respects state or national borders. It will not be confined.

This spread poses a particular problem for rural communities — 40 percent of prisons are in counties with fewer than 50,000 residents — which typically lack the health care infrastructure to deal with such outbreaks. Even a modest outbreak can quickly overwhelm local hospitals with scant numbers of ventilators and I.C.U. beds.

Local jails face additional challenges. While prisons report much larger case numbers, the rapid turnover in jails — where many people are confined for only a few days or even hours — enables the virus to circulate swiftly between inmates and the larger community, and makes tracking all the more difficult. In a report last month on outbreaks in the Mountain West, The Times noted that in Cascade County, Mont., infections at the local jail made up about a quarter of all known cases in the county. Over two months, the facility knowingly released 29 people who were considered actively infected.

As with so much about the pandemic, this is a problem that should have been dealt with more aggressively early on. In the spring, Attorney General Bill Barrwas among those calling on correctional facilities to mitigate risk, with a focus on reducing overcrowding through early release and other decarceration measures. While some progress has been made, it has been uneven and inadequate.

“Prisons and jails experienced declines in total population (approximately 11 percent of the incarcerated population) in the first half of 2020,” according to a report on decarceration put out by the National Academies of Sciences, Engineering and Medicine. The report notes that “these reductions appear to be mainly the result of declines in arrests, jail bookings and prison admissions related to lockdowns and the closure of state and local courts.” It continues: “The releases among sentenced jail and prison populations that have occurred have, for the most part, occurred on a case-by-case basis and have been procedurally slow and not well suited to crisis situations.”

While many jails saw a population drop during the first few months of the pandemic, the numbers of people being held in jails began climbing again over the summer, according to a September briefing by the Prison Policy Initiative, which analyzed 451 county jails. “In 88 counties, jail populations are higher now than they were before the pandemic” the briefing notes.

Some states have taken legislative action to speed the decarceration process. A bill signed by New Jersey’s governor last month permits prisoners with less than a year left on their sentences to be released up to eight months early. This has already prompted the release of more than 2,000 people, with another 1,000 or more releases anticipated.

All too often, continued foot-dragging or dysfunction by prison officials requires the courts to step in. In the spring and summer, the San Quentin State Prison in California had a major coronavirus outbreak. Built in the mid 1800s and early 1900s, the outdated facility suffered from overcrowding, inadequate medical staffing, “exceedingly poor ventilation, extraordinarily close living quarters and inadequate sanitation,” according to a panel of medical experts from the University of California, Berkeley, who were brought in to assess the situation in June. By late July, the number of active cases had topped 1,600. Tents were erected to house the sick. Before the outbreak faded, around 2,200 inmates had confirmed coronavirus infections, and 28 had died. In addition, 298 staff members were infected, resulting in one death.

The problem continued to fester. In late October, a state appeals court ruled that the prison authorities’ efforts to address the issue had been insufficient and that inmates’ constitutional protection from cruel and unusual punishment was still being violated. To deal with the emergency, the prison was ordered to cut its population by around half, through a mix of releases and transfers. (The original outbreak was sparked by the transfer to San Quentin of infected inmates from another prison.)

Clearly, more needs to be done. The report by the National Academies outlines best practices for reducing the incarcerated population, broken down into short-term and longer-term solutions. The suggested measures start with a systemic commitment to diversion efforts such as “noncustodial penalties” for minor infractions, including probation and parole violations, and the limiting of pretrial detentions through means such as reducing or eliminating bail.

In addition to offering guidance on a bolder decarceration effort, the report stresses the importance of minimizing risks to the families and communities involved, such as “offering testing prior to release, a place to quarantine in the community, and examination of parole and probation policies and procedures.” More comprehensive and more standardized testing and reporting requirements are also needed.

Managing this kind of crisis is not a one-and-done effort, the report emphasizes. It is a process requiring “sustained engagement” by a wide array of actors at all levels.

It is all too easy for many Americans to ignore the horrors of what is happening inside the nation’s prisons and jails. Inmates are isolated from the broader populace, their suffering kept out of sight. But their welfare in this pandemic remains inextricably linked to everyone else’s. The nation’s continued failure to bring the virus to heel among this vulnerable population is both a public health catastrophe and a moral one."

Opinion | America Is Letting the Coronavirus Rage Through Prisons
Posted by John H Armwood II at 9:49 AM