Opinion | When Will Eric Garner Get Justice? 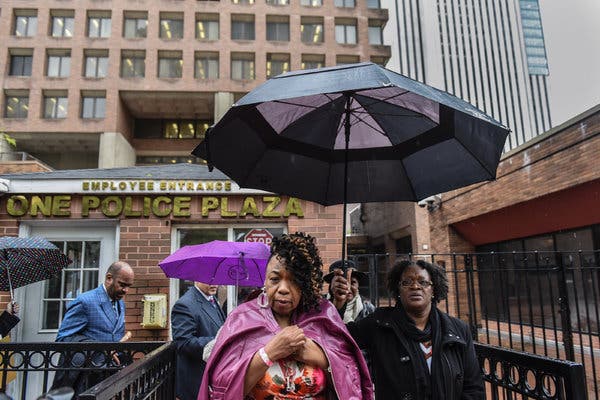 As Eric Garner lay dying, he was gasping for air and bleeding in his neck and eyes. The arm of a New York City police officer was pressed hard against his throat.

Some cast their eyes to the floor.

One woman wept as the man beside her gently stroked her back.

Mr. Garner’s family has seen no justice in the five years since his death.

Daniel Pantaleo, the officer who put Mr. Garner in a chokehold during the fatal arrest in July 2014, never faced criminal charges after a grand jury on Staten Island, one of the most police-friendly areas of the city, declined to indict him.

Mr. Pantaleo not only remained on the force but also saw his income rise after Mr. Garner’s death, collecting a 35 percent increase in overtime pay the following year, even though he was on modified duty.

The federal civil rights investigation into the death fell into a dispute between federal prosecutors in Brooklyn and veteran civil rights prosecutors in Washington over whether to file charges. The attorney general at the time, Loretta Lynch, ultimately authorized prosecutors to move ahead toward indictment, but problems with the initial F.B.I. investigation delayed the case until after President Trump took office.

At long last, however, Mr. Pantaleo is standing for a departmental trial, on charges brought by the city’s Civilian Complaint Review Board. The review board accused him of reckless use of a chokehold and intentional restriction of breathing. If a judge finds him guilty, his fate will reside with the police commissioner.

One of the many people waiting in line to attend the departmental trial of Officer Daniel Pantaleo.Yana Paskova/Getty Images

One of the many people waiting in line to attend the departmental trial of Officer Daniel Pantaleo.Yana Paskova/Getty Images

The disciplinary hearing, which is being held at Police Headquarters, in downtown Manhattan, has forced a brutal reassessment of a dark moment in the city’s history.

It also serves as a visceral reminder of the cost of refusing to hold the nation’s largest police department accountable when something goes wrong.

On Thursday, when lawyers showed the court an exchange of text messages between a sergeant at the scene of the deadly arrest and a supervising lieutenant, we learned how warped we have allowed the city’s policing culture to become.

“He’s most likely DOA,” the sergeant wrote in a text message to Lt. Christopher Bannon. “Not a big deal,” Lieutenant Bannon replied. “We were effecting a lawful arrest.”

New York has made considerable progress in its policing practices over the years, but there still is not adequate accountability when abuses arise.

One reason is that the department, understandably, has gotten the credit for one of New York’s greatest successes: a celebrated, decades-long drop in crime.

Another is that the department took on a nearly heroic status after the Sept. 11 attacks, which is also understandable. The department also enjoys the political power that comes with having the nation’s largest police union.

These forces have cemented the Police Department’s nearly untouchable status in city politics.

Mayor Bill de Blasio learned this when hundreds of cops turned their backs on him at the funerals of two police officers killed by a man who had spouted anti-police vitriol. The officers were angry that a few months earlier Mr. de Blasio had the audacity to say that the Garner case made him think of the possibility of losing his biracial son in an encounter with the police.

Some police officers turned their backs during a funeral procession, in protest against Mayor de Blasio.Damon Winter/The New York Times

Some police officers turned their backs during a funeral procession, in protest against Mayor de Blasio.Damon Winter/The New York Times

Rudy Giuliani was able to ride the Police Department’s political power to win the 1993 mayoral election, whipping up racist sentiment among the force to unseat Mayor David Dinkins, the city’s first and only black mayor.

Sometimes, deference to the Police Department comes with a price. Former Mayor Michael Bloomberg’s unquestioning support of the overbroad use of stop-and-frisk under Police Commissioner Raymond Kelly, for instance, threatened to tarnish Mr. Bloomberg’s legacy.

Wary of the N.Y.P.D’s power, New York’s mayors have largely allowed the 36,000-officer force to police itself.

What other possible explanation is there for allowing the department to handle Officer Pantaleo with such kid gloves over the past five years?

Mayor Bill de Blasio and his police commissioners initially said they would await the outcome of a federal civil rights investigation into the death before moving forward with any disciplinary measures.

Yet, at the trial this week, the public learned that the department’s own internal affairs investigators found that Officer Pantaleo had used a banned chokehold on Mr. Garner, and they were ordered by a supervisor to recommend that the department bring disciplinary charges against him. But the Police Department never brought those charges, even after it was clear that federal prosecutors had dropped the ball. Why not? Mayor Bill de Blasio owes the Garner family and the public an explanation.

Mr. de Blasio also vowed to retrain the entire police force in the wake of Mr. Garner’s death. But half a decade later, the data shows that officers are still using chokeholds, and that they rarely face serious punishment for doing so.

Few have paid a higher price for the city’s refusal to take police abuse seriously than the family of Eric Garner.

Erica Garner at a vigil for her father in 2015.Carlo Allegri/Reuters

Erica Garner at a vigil for her father in 2015.Carlo Allegri/Reuters

In 2017, Erica Garner, Mr. Garner’s daughter, died of a heart attack at the age of 27 after years of activism against police brutality in the aftermath of her father’s death.

Gwen Carr, Mr. Garner’s mother, has been relentless. This week, she brought earplugs to the trial so she wouldn’t have to hear her son’s cries for help as a video of his arrest played in the courtroom.

Outside Police Headquarters on Thursday, Ms. Carr said she wouldn’t rest until the officers involved were off the force. “They do not think of us New Yorkers as human beings,” she said.

Ms. Carr is right. Eric Garner deserved better, and so do we."

Opinion | When Will Eric Garner Get Justice?
Posted by John H Armwood II at 11:33 AM