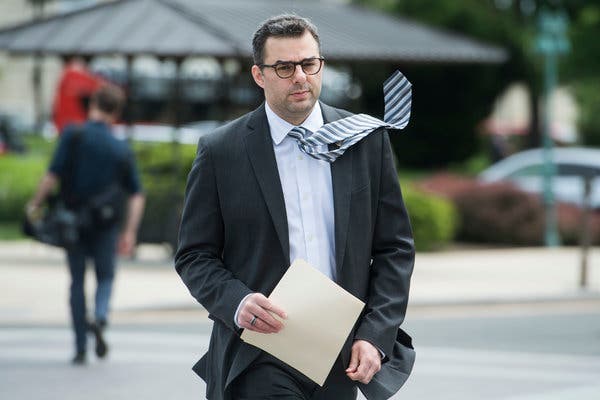 "The benefits of actually reading.

"More than a year before the House Judiciary Committee adopted articles of impeachment against President Richard Nixon, Representative Pete McCloskey, a California Republican, became the first member of Congress to call for a discussion about whether to begin an impeachment inquiry over Watergate.

Over the weekend, Representative Justin Amash of Michigan pulled a McCloskey of sorts. He became the first Republican in Congress to say that the report of the special counsel, Robert Mueller, showed that President Trump had committed impeachable offenses.

“Mueller’s report reveals that President Trump engaged in specific actions and a pattern of behavior that meet the threshold for impeachment,” Mr. Amash wrote on Twitter.

“In fact,” he added in a 13-tweet explanation of his conclusions, “Mueller’s report identifies multiple examples of conduct satisfying all the elements of obstruction of justice, and undoubtedly any person who is not the president of the United States would be indicted based on such evidence.”

Mr. Trump responded on Sunday by calling Mr. Amash “a total lightweight” and “a loser.” And on Monday, Mr. Amash went at it again on social media, dispelling common misconceptions about the Mueller report and its findings.

Mr. Amash isn’t likely to be a bellwether for his party. He is a libertarian who has long staked out his own positions on issues such as gay marriage, government surveillance and Mr. Trump’s entry restrictions on Muslim travelers.

But what is remarkable about Mr. Amash’s stand is how much tougher it is than that of the House’s Democratic leaders to date. Wary of a move that has little public support, Speaker Nancy Pelosi and prominent committee leaders have avoided talk of impeachment and have focused on learning what Attorney General William Barr redacted from the report, as well as subpoenaing testimony and documents.

That fight has little to show for itself so far. The House Judiciary Committee has already held Mr. Barr in contempt for defying a subpoena, and the administration has blocked the former White House counsel, Donald McGahn, from testifying about actions by the president that are at the heart of accusations of obstruction of justice. It still isn’t clear whether Mr. Mueller himself will testify.

Adam Schiff, the chairman of the House Intelligence Committee, who has long been one of Mr. Mueller’s strongest defenders, said last week that a “sterile report” was no match for direct congressional testimony from Mr. McGahn or Mr. Mueller. As the Watergate hearings showed, there is power in the public hearing directly from key officials.

But there is nothing sterile about the report, as Mr. Amash and others, including Senator Elizabeth Warren, have eloquently noted. In damning detail it describes the depth of Russian interference with our democracy, Mr. Trump’s associates’ willingness to engage with a foreign adversary and the president’s efforts to thwart Mr. Mueller’s operation.

It’s understandable that Democrats are concerned that an impeachment fight could distract from the issues at the heart of their campaign to unseat Mr. Trump and Republican members of Congress next year. The House needs to investigate aggressively the questionable conduct by this president and follow that inquiry where it leads.

But Democratic leaders also need to be stronger and clearer about what we know.

Walter Dellinger, who led the Justice Department’s Office of Legal Counsel during the Clinton administration, expressed it well in a Washington Post op-ed last week.

“How different would it have been,” he wrote, “if a unified chorus of Democratic leaders in Congress and on the campaign trail had promptly proclaimed the actual truth: This report makes the unquestionable case that the president regularly and audaciously violated his oath and committed the most serious high crimes and misdemeanors.”

That’s what Mr. Amash concluded. And like Mr. McCloskey did all those years ago, he concluded that Mr. Trump’s pattern of obstructive behavior was enough for the House to fulfill its constitutional duties."

Opinion | How a Lone Republican Set an Example for Democrats on the Mueller Report - The New York Times
Posted by John H Armwood II at 5:23 AM