Opinion | How Trump’s Stonewalling Puts Our Democracy at Risk 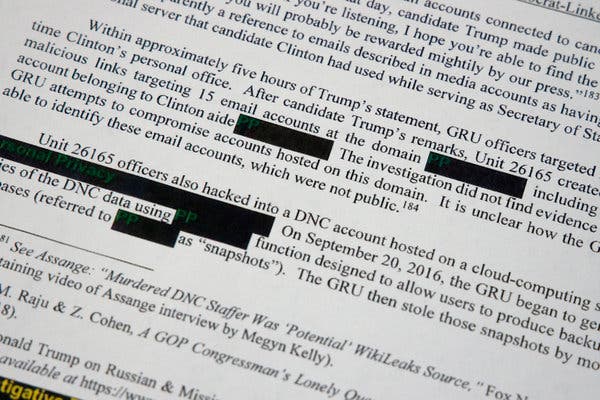 You may have a hard time believing a key argument the Trump administration is using to rebuff efforts by Congress to obtain information legislators need to do their job. The administration has claimed — for example, in a letter from the White House counsel to the House Judiciary Committee in response to congressional subpoenas of the full Mueller report — that Congress must demonstrate to the administration’s satisfaction that the information would serve a “legitimate legislative purpose.” In effect, Congress must show that its interests fall within the power under Article I of the Constitution to pass new legislation.

Faced with a similar argument last week in a hearing for a case involving Congress’s subpoena of Mr. Trump’s financial records, a district court judge, Amit Mehta, was highly skeptical.

But especially with the Mueller report, the administration’s claim isn’t just legally ridiculous. It actually puts our country at grave risk.

There’s a lot wrong with the administration’s position, including that oversight and investigations are a fundamental part of Congress’s Article I responsibilities. The Supreme Court has long recognized as much. Showing a specific legislative purpose is not required. That’s what Judge Mehta told Mr. Trump’s lawyers.

In fact, Congress has many important legislative purposes that would be served by access to the full Mueller report and underlying documents. The administration’s attempt to deny or slow roll the release of this information is hampering Congress’s ability to draft new legislation to protect our democracy from foreign adversaries.

I know from experience. Last year the Republican-led Senate Judiciary Committee asked me to testify about several legislative initiatives that could be informed by an understanding of Russia’s 2016 election interference — including any American’s support for those activities. The full Mueller report and underlying documents could provide a trove of valuable information to inform and accelerate such legislation.

Along with Kenneth Wainstein, who served as the head of the Justice Department’s national security division under President George W. Bush, our panel gave the best advice we could on a wide range of legislation proposed by members of the committee, Republican and Democratic, in addition to ideas of our own. The proposed reforms included the expansion of enforcement authority for rules governing foreign agents, closing loopholes in the Lobbying Disclosure Act, defining more precisely the federal crime of conspiracy to defraud the Federal Election Commission, imposing new immigration controls on foreign nationals who interfere in United States elections, prohibiting the use of shell companies to conceal election contributions by foreign nationals, incentivizing collaboration between social media companies and independent evaluators, and adding reporting requirements for political campaigns when approached by foreign agents with stolen information. That is a long list, yet it goes on.

The redacted Mueller report is rich in information, but legislators would very likely benefit enormously by knowing more about a number of things from the pages that have been kept from Congress: how Moscow devised its attempts to penetrate the Trump campaign and the tactical benefits it expected to gain from different parts of the operation, what actions Americans took wittingly and unwittingly to support Kremlin front organizations and WikiLeaks, and why members of the Russian delegation at Trump Tower were not charged with violations of the Foreign Agent Registration Act. Those are just a few of the many pieces missing from the puzzle.

The Mueller report also hints at specific legislative reforms for the Hill to consider. Congress may need to expand the federal offense of trafficking in stolen property to include hacked emails, define what counts as a “thing of value” when offered to a campaign by a foreign government agent, and improve how the intelligence community coordinates its response and warns political campaigns of foreign threats.

The list of possible reforms is daunting, so Congress will also need to figure out what among the worthwhile efforts should be prioritized. But any run at these problems must be informed by an understanding of the organizational and individual weaknesses that allowed the Russian interference operation to gain such traction.

Our legislators aren’t flying blind, but the Trump administration is preventing them from obtaining the kind of visibility that would best serve the country. Time is running short: The electoral calendar won’t bend, and the full threat of foreign interference remains unaddressed.

The administration’s bad faith arguments for keeping this information secret will surely affect how federal judges view the executive branch’s position when Congress takes officials to court over the full Mueller report. Judge Mehta’s reaction to Mr. Trump’s lawyers is a signal of how this will play out.

But we’re a long way off from that battle. In the meantime, the White House is robbing Congress of information vital to protecting our democracy and national security through the exercise of legislative powers.

Ryan Goodman (@rgoodlaw) served as special counsel to the general counsel of the Department of Defense. He is a professor of law at New York University and editor in chief of the blog Just Security."

Opinion | How Trump’s Stonewalling Puts Our Democracy at Risk
Posted by John H Armwood II at 9:24 AM