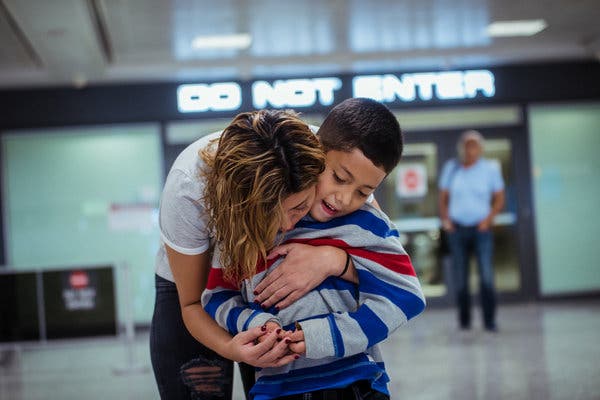 "HOUSTON — The Trump administration most likely separated thousands more children from their parents at the Southern border than was previously believed, according to a report by government inspectors released on Thursday.

The federal government has reported that nearly 3,000 children were forcibly separated from their parents under last year’s “zero tolerance” immigration policy, under which nearly all adults entering the country illegally were prosecuted, and any children accompanying them were put into shelters or foster care.

But even before the administration officially unveiled the zero-tolerance policy in the spring of 2018, staff of the United States Department of Health and Human Services, the agency that oversees the care of children in federal custody, had noted a “sharp increase” in the number of children separated from a parent or guardian, according to the report from the agency’s Office of Inspector General.

As of December, the department had identified 2,737 children who were separated from their parents under the policy and required to be reunified by a federal court order issued in June 2018.

But that number does not represent the full scope of family separations. Thousands of children may have been separated during an influx that began in 2017, before the accounting required by the court, the report said.

Thus, the total number of children separated from a parent or guardian by immigration authorities is “unknown,” because of the lack of a coordinated formal tracking system between the Office of Refugee Resettlement, the arm of Health and Human Services that takes in the children, and the Department of Homeland Security, which separated them from their parents.

“This report confirms what we suspected: This cruel family separation practice was way bigger than the administration let on,” said Lee Gelernt, who challenged the policy in court on behalf of the American Civil Liberties Union. “We will be back in court and ask the judge to order the government to explain these numbers,” he said.

The family separations were a key part of the Trump administration’s effort to deter migrant families from trying to enter the country at the Southwest border, where they have been arriving in large numbers, most of them fleeing violence and deep poverty in Central America.

While the policy was framed as a decision to prosecute those who entered the United States illegally, it resulted in thousands of migrant parents spending months in agonized uncertainty, unable to communicate with their children and in many cases not knowing even where the children were.

Infants and toddlers were among the children who were put into foster homes or migrant children shelters, often hundreds or thousands of miles away from where their parents were detained. Under separate policies, the administration also made it difficult for relatives other than the children’s parents to take the children into their own homes.

After a review of internal government tallies, The New York Times found last year that more than 700 migrant children had been separated from their families in the months before the government officially announced the zero-tolerance policy.

On June 26, 2018, a federal judge in San Diego, in response to the A.C.L.U. lawsuit, directed the federal government to halt the separations at the border and to reunite children with their parents. President Trump rescinded the policy that same month.

However, the federal inspectors found that separations have continued to occur: As of November, the report found, Health and Human Services had received at least 118 children who had been separated from their families since the court order.

Officials at the Department of Homeland Security, which oversaw the family separations at the border, have said they have separated families only when necessary, such as when a parent is facing a serious criminal prosecution, or when authorities have reason to believe that the adult accompanying the child is not an appropriate guardian.

“The report vindicates what D.H.S. has long been saying,” said Katie Waldman, a spokeswoman for the department. “For more than a decade it was, and continues to be, standard for apprehended minors to be separated when the adult is not the parent or legal guardian, the child’s safety is at risk, or serious criminal activity by the adult. We are required under the law that Congress passed to send all unaccompanied alien children to H.H.S.”

Ann Maxwell, the Health and Human Services Department’s assistant inspector general for evaluation and inspections, said the separations appeared to have been occurring for a full year before the court issued its order.

“Thousands of children were separated from parents and guardians, referred to H.H.S. and released from H.H.S. care before the court order,” Ms. Maxwell said in a conference call with reporters.

“The total number is unknown,” she said. “It is certainly more than 2,737, but how many more, precisely, is unknown.” Moreover, that number may never be known: Department officials, she said, had told her office that there were “no efforts underway to identify that. It would take away resources from children already in care.”

In an email after the call, Ms. Maxwell’s spokesman confirmed that inspectors believed the number of separated children may be “thousands” more than the 2,737 reported to the court.

The inspectors provided no precise data to support that estimate, though Ms. Maxwell said that Health and Human Services had noted a “spike” in the frequency of children being separated from their families, from 0.3 percent of all apprehended families in 2016 to 3.8 percent in 2017.

Family separations have occurred for years, but they had previously been “fairly rare,” Ms. Maxwell said, occurring only in cases where there were concerns about child welfare. That changed in 2017, she said.

Ms. Maxwell said that most of the families on the list of separated families had been reunited, pursuant to the court order. But she said the figures continued to evolve, for several reasons. The absence of an integrated data system to track separated families through the two federal agencies that oversee them was one problem, she said.

Also complicating the issue, she said, was the complex problem of determining which children should be considered officially “separated” from their families. That meant that the list of families entitled to reunification was still being revised as late as December 2018, more than five months after the court order took effect.

The Department of Health and Human Services, in its official response, said it had accounted publicly for all children separated from relatives at the border and then delivered to the agency for care.

“H.H.S. faced challenges in identifying separated children,” the agency said. “The effort undertaken by H.H.S. was complex, fast-moving and resource-intensive.”

The inspector general’s report, the department said, “provides a window into the herculean work of the H.H.S. career staff to rapidly identify children in O.R.R. care who had been separated from their parents and reunify them.” O.R.R. refers to the resettlement office.

The department emphasized that the inspector general found “no evidence whatsoever” that it had lost track of children in its care. Though there were delays in linking children to parents, partly as a result of the Department of Homeland Security’s tracking system. When immigration agents separated families at the border, records that could have been used to connect parents and children were automatically deleted because the computer system had not been modified to account for separated families.

In its response on Thursday, the Department of Health and Human Services said that the inspector general’s report “corroborates what H.H.S. has said all along: H.H.S. can determine the location and status of any child in O.R.R. care at any time by accessing the case management records for the child, or the O.R.R. online portal.”

Family Separation May Have Hit Thousands More Migrant Children Than Reported - The New York Times
Posted by John H Armwood II at 10:06 AM