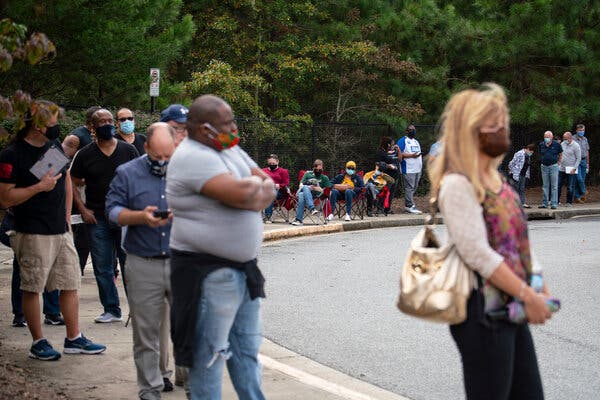 "These largely Black and LatinX people were illegally purged by false claims that they moved out of state.  MLK's 92-year-old cousin who has never moved and votes was taken off of the list.
"A lawsuit in Georgia claims that nearly 200,000 registered voters were improperly purged.
Voter advocacy groups in Georgia filed a lawsuit on Wednesday asking a federal court to compel the state to restore nearly 200,000 names to its voter registration list ahead of the January runoff races for the state’s two Senate seats that will determine the balance of power in Washington.
In the suit, filed in the northern district of Georgia, three voter advocacy groups said the state had improperly removed 198,000 people from its voter registration lists in 2019 on the grounds that they had changed their addresses.
The Georgia chapter of the American Civil Liberties Union released a report in September based on an investigation by a progressive independent journalist, Greg Palast, who found that most of the approximately 300,000 people removed had not changed their addresses. Since the investigation was completed, several thousand voters have died or moved, but more than 195,000 remained wrongly affected, the suit says.
The Georgia A.C.L.U. said in a statement that those removed from the rolls were likely to be “young voters, voters of lower income, and citizens of racial groups that have been denied their sacred right to vote in the past.”
The suit comes after a pair of hard-fought Senate races in which neither leading candidate received 50 percent of the vote, sending both contests to runoffs that will be held Jan. 5. One race pits the Republican senator David Perdue against the Democrat Jon Ossoff. In the other, Senator Kelly Loeffler, also a Republican, will face a Democratic challenge from the Rev. Raphael Warnock. If Democrats win both races, they will effectively control the Senate.
The office of the Georgia secretary of state, led by Brad Raffensperger, did not immediately respond to a request for comment. But during a separate news conference on Wednesday, Gabriel Sterling, Georgia’s voting system implementation manager, dismissed the allegations.
“I’m going to go with no,” he said, when asked whether his office had purged nearly 200,000 voters from registration lists. “Frankly, I’ve not seen or heard of this lawsuit yet.”
Since the election, Mr. Raffensperger’s office has been dogged by baseless allegations of voter fraud from the Trump campaign. Mr. Raffensperger has repeatedly said that the results of the Georgia election were trustworthy.
LaTosha Brown, the head of Black Voters Matter Fund, one of the plaintiffs in the suit, said the issue with the election was not voter fraud.
“It’s been a voter suppression,” she said during a news conference on Wednesday with members of the other advocacy groups. “Massive scale voter suppression.”
The Attack on Voting in the 2020 Elections - The New York Times
Posted by John H Armwood II at 12:56 PM