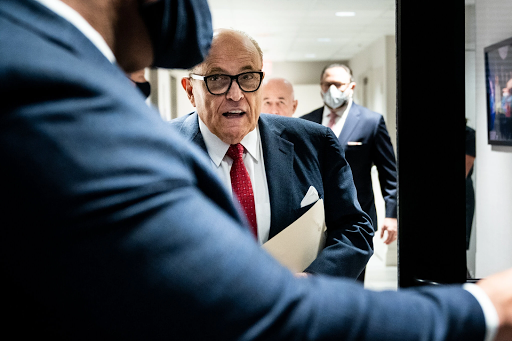 No!
"Giuliani is said to have discussed a possible pardon with Trump.
Biden and Harris will introduce their economic team, with women in top spots.
Biden faces a balancing act in choosing a top aide with business ties.
Biden’s team is planning a pared-down inauguration that keeps spectators ‘healthy and safe.’
Trump has raised $170 million since Election Day.
Their agenda on the line, progressives descend on Georgia — but with modified messages.
As Senate runoffs approach, Trump’s attacks on Georgia Republicans have worried some in his party.
Get email alerts with live updates about the U.S. presidential transition.
Giuliani is said to have discussed a possible pardon with Trump.
Rudolph W. Giuliani, President Trump’s lawyer, has been at the forefront of promoting the president’s baseless claims of election irregularities.
Rudolph W. Giuliani, President Trump’s lawyer, has been at the forefront of promoting the president’s baseless claims of election irregularities.Credit...Erin Schaff/The New York Times
Rudolph W. Giuliani, President Trump’s lawyer who has led the most extensive efforts to damage his client’s political rivals and undermine the election results, discussed with the president as recently as last week the possibility of receiving a pre-emptive pardon before Mr. Trump leaves office, according to two people told of the discussion.
It was not clear who raised the topic. The men have also talked previously about a pardon for Mr. Giuliani, according to the people. Mr. Trump has not indicated what he will do, one of the people said.
Mr. Giuliani’s potential criminal exposure is unclear. He was under investigation as recently as last summer by federal prosecutors in Manhattan for his business dealings in Ukraine and his role in ousting the American ambassador there, a plot that was at the heart of the impeachment of Mr. Trump.
Mr. Giuliani did not respond to a message seeking comment. Christianne Allen, his spokeswoman, said, “Mayor Giuliani cannot comment on any discussions that he has with his client.”
Mr. Giuliani’s lawyer, Robert Costello, said, “He’s not concerned about this investigation, because he didn’t do anything wrong and that’s been our position from Day 1.”
A spokeswoman for Mr. Trump did not respond to an email seeking comment.
Such a broad pardon pre-empting any charge or conviction is highly unusual but does have precedent. George Washington pardoned plotters of the Whiskey Rebellion, shielding them from treason prosecutions. In the most famous example, Gerald R. Ford pardoned Richard M. Nixon for all of his actions as president. Jimmy Carter pardoned thousands of American men who illegally avoided the draft for the Vietnam War.
Mr. Trump has wielded his clemency powers liberally in cases that resonate with him personally or for people who have a direct line to him through friends or family, while thousands of other cases await his review.
Last week he pardoned his former national security adviser Michael T. Flynn broadly for potential legal troubles beyond the charge he had faced of lying to federal investigators. The move raised expectations that Mr. Trump will bestow clemency on other associates in his final weeks in office.
— Maggie Haberman and Michael S. Schmidt"
Presidential Transition: Giuliani Said to Have Discussed Pardon With Trump - The New York Times
Posted by John H Armwood II at 11:15 AM