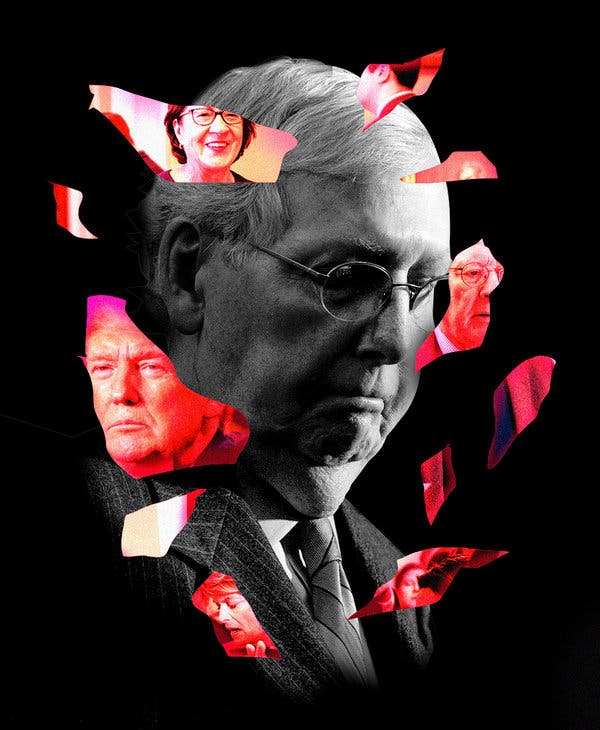 "By The Editorial Board, The New York Times

"It would be nice to have faith that, as the Senate prepares to receive the articles of impeachment against President Trump and gears up for its role in this rare and momentous process, it will do the right thing. Confronted with a mountain of evidence that an American president abused his power by shaking down a vulnerable country for his own personal gain — and then stonewalled a congressional investigation into his behavior — senators should spare no effort in conducting a fair and thorough trial, complete with witnesses and documentary evidence.

Alas, in 2020, the Senate is led by Mitch McConnell, who has demonstrated time and again that he is more concerned with covering for Mr. Trump than protecting the integrity of the office Mr. Trump holds, the security of the nation he leads or the Constitution he swore to defend.

With few exceptions, Mr. McConnell has enjoyed the lock-step support of his caucus. So it has been notable to hear over the past few days a hint of dissension within the ranks, as a handful of Republican senators, including Lamar Alexander of Tennessee, have indicated that they oppose a straight-up dismissal of the charges against the president.

“I think we should hear the case. We have a constitutional duty to do that,” Mr. Alexander said.

This is a low bar to clear: The House of Representatives marshaled extensive and damning testimony against Mr. Trump, despite his best efforts to keep it from coming out. The debate now should be how to get the fullest possible account of the Ukraine scandal, not whether you need more than one hand to count the number of Republicans who are willing to take up the case at all.

Some senators who have expressed an openness to hearing from witnesses have suggested a “one for one” deal, where any witness called by Democrats — say, the former national security adviser John Bolton — would be balanced out by one called by Republicans — say, Hunter Biden. Of course, these two witnesses are not the same. Mr. Bolton claims to have direct and pertinent information about the president’s actions and motivations in withholding nearly $400 million in military aid to Ukraine; Mr. Biden is a side player being dragged in by the president and his allies to muddy the case against Mr. Trump.

Mr. McConnell, meanwhile, has yet to show that he takes any part of this process seriously. He has already announced that he will work hand-in-glove with the Trump administration as it defends the president and that he will blithely violate the oath of impartiality he is required to take. On Tuesday, Mr. McConnell mocked the House Democrats’ calls for more witnesses to testify, saying they can’t claim that the case against Mr. Trump is so strong as to be impeachable, and yet “also so weak that the Senate needs to go fishing.”

As the majority leader surely knows, this is like saying a criminal suspect might as well walk free because he intimidated the leading witness into silence. Mr. Trump was impeached, in part, precisely because he muzzled top administration officials like Mr. Bolton, who has since said he is willing to testify if subpoenaed by the Senate.

There is still time for Republicans — even if only four of them — to treat this trial with the gravity it deserves.

There is even time for President Trump to behave like, well, a president. Each of the last two presidents to face impeachment proceedings — Bill Clinton and Richard Nixon — complied with congressional subpoenas, if grudgingly. The question must be asked again: If Mr. Trump is so confident that he did nothing wrong, why does he refuse to let these officials testify or turn over key documents? And if Mr. McConnell is so confident that his party’s leader will be vindicated, why fight so hard to prevent the full truth from coming out?"