The Supreme Court Is Poised to Find New Ways to Disenfranchise Black Voters If the court gives the go-ahead to two new, blatantly discriminatory voting laws, we can say goodbye to free and fair elections

“If the court gives the go-ahead to two new, blatantly discriminatory voting laws, we can say goodbye to free and fair elections. 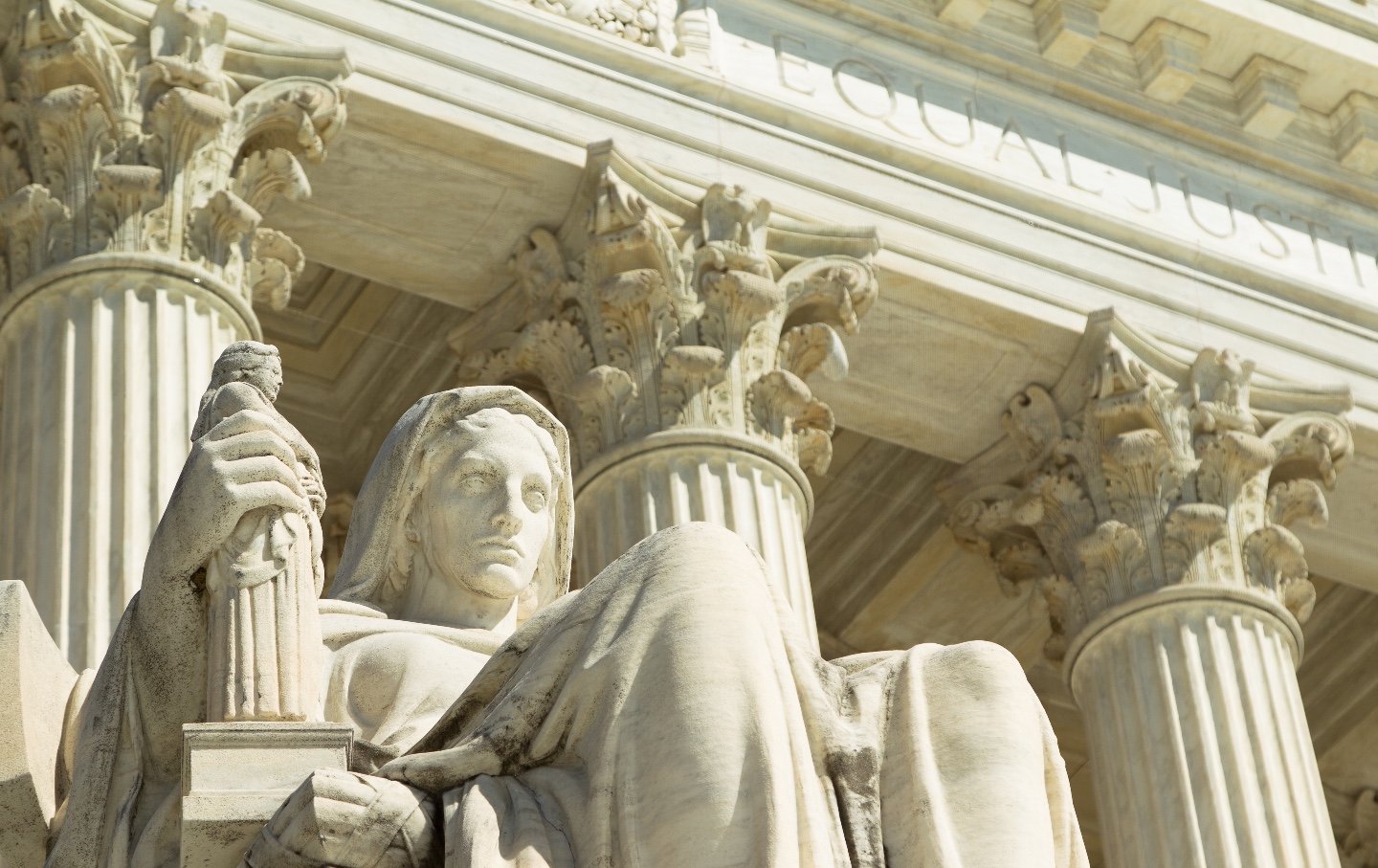 An oversize marble statue, Contemplation of Justice, looms over the entrance to the the Supreme Court. (flysnowfly / Shutterstock)

Earlier this week, the Supreme Court entertained a frontal attack on the Voting Rights Act of 1965. Republicans in Arizona, likely still eating their feelings after losing both the presidential election and another Senate seat, have instituted a pair of new voter restrictions aimed directly at depressing the minority vote.

Sadly, that’s not why this case is interesting. Passing laws to depress the minority vote is the only policy platform Republicans have. What’s interesting is that Republicans are being relatively open about the fact that the point of their laws is to suppress votes. When asked directly why Republicans want to be able to throw away certain ballots, the lawyer for the Republican National Committee, Michael Carvin, said, “Because it puts us at a competitive disadvantage relative to Democrats. Politics is a zero-sum game.” Usually, Republicans argue that their racist voter suppression laws fit squarely within the conduct permitted by the Voting Rights Act. Here, Republicans are arguing that the Voting Rights Act should be reinterpreted to allow their conduct.

The Voting Rights Act has already been hobbled by conservatives on the Supreme Court. Back in 2013, Chief Justice John Roberts, whose career can be defined by his hostility toward Black people voting, gutted Section 5 of the Act in a case called Shelby County v. Holder. Section 5 required Jim Crow states to get pre-clearance from the federal government before they enact new (read racially discriminatory) voting laws.

This week, House Democrats passed the John Lewis Voting Rights Act, a bill specifically designed to put back what Roberts took away. That’s nice, but it’s a bit like fighting the last war. Republicans have already moved on to the next one. The Arizona Republicans are not taking advantage of the already eviscerated Section 5; they are coming for Section 2. That part of the act makes it illegal for states to enact laws either with the “intent” of discriminating against minority voters or that result in discrimination against minority voters. These protections are what Carvin and Arizona Attorney General Mark Brnovich think put them at a competitive disadvantage.

Arizona’s two laws are designed to and will have the effect of decreasing minority turnout in elections in the state. One law prohibits so-called ballot harvesting, which is when people who vote by mail give their ballots to another person to drop off at the polls. Another law allows Arizona simply to throw away votes that were cast at the wrong precinct.

Both of these laws will disproportionately affect minority communities, just like they’re designed to do. Consider the issue of voting precincts. It’s actually not obvious where your official voting precinct is, especially if you live in a densely packed urban community where the precinct lines are drawn unnaturally and can change largely without notice. For instance, when I lived in New York City, I used to have to walk past the polling station that was closest to my apartment to get to my official station.

That confusion is purposeful. In their brief opposing these laws, the Democratic National Committee pointed out that polling places are frequently changed in minority communities, and they are often intentionally changed to counterintuitive locations. Moreover, people of color are disproportionately renters with high mobility, which means they are more likely to move to a new precinct between elections.

Mistakes happen. In most states, if you accidentally vote in the wrong precinct, the Board of Elections will still count your vote for the elections that aren’t specific to a given neighborhood. For instance, your vote for a statewide office is counted even if your vote for a local official is discarded because you voted in the wrong location. But Arizona wants to discard the entire ballot, including valid votes for statewide elections.

Meanwhile, what Republicans call “ballot harvesting” is just another attempt by them to demonize organizations that try to make voting more frictionless. Technically, I ballot-harvested my mother’s absentee ballot when I took it to the polling station for her, so she didn’t have to risk getting Covid-19 or subjecting her vote to the whims of Louis DeJoy’s Postal Service.

Laws against ballot collection are directly targeted at minority communities, which historically use collection methods at higher rates than whites. People of color will drop off their ballot with institutions they trust (like their church) instead of people they don’t trust (like the white government).

We could debate the social utility of these laws if Republicans had a legitimate, fact-based argument for why imposing them makes democracy better. But they don’t have such arguments, as became evident during their day at the Supreme Court. Their lawyers argued that the state is allowed to make voting laws that result in more minority votes being thrown out as long as the state doesn’t “create” a distinct way that minorities are allowed to vote. Brnovich said in his brief: “The fact that a ballot cast by a voter outside of his or her assigned precinct is discarded does not cause minorities to vote out-of-precinct disproportionately.”

But under Republican logic, all manner of voting restrictions are back on the table, and Section 2 of the Voting Rights Act ceases to have meaning. Anything that happens merely through the normal course of systemic racism could be eligible for a new state restriction on voting rights. The state could, for example, make a law that absentee ballots will be handed out at Arizona Coyotes hockey games, but never at Phoenix Suns basketball games, on the theory that Black people are more likely to go to a basketball game than a hockey game. That discrimination would be legal under the Republican theory of the Voting Rights Act, because the state does not “create” the disparate interest in basketball versus hockey.

The Republican argument is so obviously reanimated from the Jim Crow era that even some conservatives on the court seemed to fear it would eat their brains. While Clarence Thomas, Samuel Alito, and Neil Gorsuch revealed themselves to be card carrying members of the Big Lie caucus that is willing to entertain any argument that prevents people of color from voting, alleged attempted rapist Brett Kavanaugh, Amy Coney Barrett, and even Roberts appeared skeptical about effectively shredding the entire Voting Rights Act. Barrett straight-up told Carvin that his argument “has some contradictions in it,” and told Brnovich his standard made it too easy for the state to disenfranchise minorities.

Not that they’ll stop Arizona from doing it. This ain’t no fairy tale. At oral arguments, this same skeptical half of the conservative justices seemed to be searching for some other way to uphold voter suppression beyond the functional annulment of the VRA as Arizona Republicans were asking them to do. They weren’t asking Arizona Republicans to stop making racist laws; they were asking them to stop making racist arguments in support of those racist laws. Kavanaugh, for instance, seemed to try to fashion a standard that allowed him to pay lip-service to protecting minorities from “undue burdens” in voting, but still allowed him to find Arizona’s discrimination legal.

Racism will find a way. It always does. And no piece of legislation, whether it’s the old Voting Rights Act or the new one, can stop conservatives on the court from being racist if you let them have a majority.

If Roberts, Kavanaugh, or Barrett come up with an interpretation that at least pretends to uphold Section 2 of the VRA, this case will be decided 8-1, with Stephen Breyer and Elena Kagan joining the conservatives to mollify their worst instincts. The court will say something like “voting rights are important” but Arizona has a “legitimate state interest” in discarding votes from people of color if they make a simple mistake. And Sonia Sotomayor will stand alone in dissent as the only person left on the court who will actually defend the right of people of color to vote.

I hope everybody enjoyed the last election, because it’s the last free and fair one Republicans will let us have. And that’s being incredibly generous to the last one.“