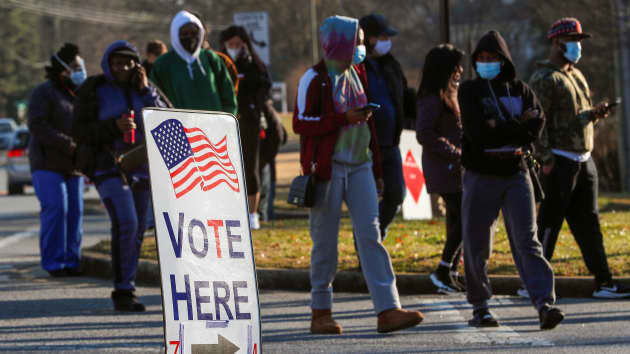 "A group of Black business executives are imploring corporate leaders in the U.S. to take forceful stands against efforts to restrict voting access, following a new law in Georgia that critics say will disproportionally hurt voters of color.

“Corporations have to stand up. There is no middle ground,” said Chenault, who was one of the first Black chief executives at a Fortune 500 company. “This is about all Americans having the right to vote, but we need to recognize the special history of the denial of the right to vote for Black Americans, and we will not be silent,” he added.

Civil rights groups in Georgia have been critical of some of the state’s largest companies for not being more vocal and direct in opposing the legislation before it was signed into law last week by GOP Gov. Brian Kemp.

A number of companies issued statements later Wednesday, after the Frazier and Chenault interview, that expressed support for voting rights. And in a memo to employees Wednesday morning, Atlanta-based Delta Air Lines CEO Ed Bastian expressed his displeasure with the final version of the Georgia legislation, calling it “unacceptable.”

The CEO of another Georgia company, Coca-Cola’s James Quincey, told CNBC the new law is “wrong.”

Kemp, in an interview on CNBC’s “Closing Bell,” dismissed the corporate push back, repeatedly contending that it makes voting more secure in the state while touting its provisions to make ballot drop boxes permanently part of elections, for example.

“There were counties last year that didn’t even have a drop box because it’s never appeared in the law before,” Kemp said, noting the law mandates all Georgia counties have at least one drop box. However, critics say the legislation will have the effect of reducing their availability in populous counties like Fulton and Dekalb.

“We have 159 counties in Georgia. One hundred and thirty-four of those counties under this legislation will be offering more hours of early voting, not less, so I would encourage these CEOs to look at these other states they’re doing business in, and compare what the real facts are to Georgia, and I think their focus will probably need to be in other places and not here,” Kemp said.

Earlier Wednesday, Frazier stressed that he was concerned about restrictive voting proposals being introduced in other states.

“Georgia is the leading edge of a movement all around this country to restrict voting access,” Frazier said. He added, “These kinds of bills have to be stopped in their tracks because you have to actually spend time reading this bill to understand what it does, and I think corporations ought to take a very strong stand in Georgia and every place else.”

Frazier pushed back strongly on the suggestion that, by specifically condemning the Georgia changes and similar efforts being pushed in other states, corporations would mistakenly wade into tangles of partisan politics.

Free and fair access to the ballot was never a partisan issue. It’s a fundamental constitutional right.

“If we allow a party to adopt as one of its fundamental strategies voter suppression, then I don’t think the answer should be, ‘Well we can’t comment on voter suppression because otherwise we’re being partisan,’” said Frazier, who is set to retire as Merck CEO later this year after a decade at the helm. “Free and fair access to the ballot was never a partisan issue. It’s a fundamental constitutional right.”

For the Georgia law, in particular, Frazier stressed he was not claiming every single provision was restrictive and hurt Black voters. For example, proponents of the bill note it mandates two Saturdays of early voting leading up to general elections, when previously only one had been required.

Many other aspects are problematic, Frazier contended, such as limits on the locations and accessibility of ballot drop boxes, as well restrictions on giving food and water to voters while they wait in line. Other critics have noted the law shortens the time allowed to request an absentee ballot. “In totality, these changes will make it much harder for certain voters to vote,” Frazier said.

“There’s already not equal access,” Frazier added, referencing data that shows longer wait times for Black voters in Georgia than white counterparts. “What we’re saying is that state by state, in the absence of substantiated and compelling evidence of voter fraud, any actions that are taken to restrict the ability of eligible voters to vote should be opposed,” he said.

A sign is seen as voters line up for the U.S. Senate run-off election, at a polling location in Marietta, Georgia, U.S., January 5, 2021.

Among the dozens of business leaders backing Frazier and Chenault’s efforts is Mellody Hobson, co-CEO and president of Ariel Investments. Hobson earlier this month became chair of Starbucks’ board. She’s the only Black chairwoman of an S&P 500 company. Tony West, chief legal officer at Uber, and Vista Equity Partners founder and CEO Robert Smith also signed the letter organized by Frazier and Chenault, which was published as an ad in Wednesday’s edition of The New York Times.

Companies have to recognize their power to create change on critical aspects of democracy, Chenault said. “If they can’t speak out on this issue, what can they speak out on?” he asked, rhetorically. “People should not be focused on, ’Will it hurt me if I take a stand?” he added.

“With all due respect, many people died for the right to vote, and this one where we’re asking corporations to take a moral stand. If corporations had done this throughout our history, we would be far further along in race relations in this country,” Chenault concluded.

Mallory Blount, a spokesperson for Kemp, contrasted Georgia’s policies for early voting to those of New Jersey, where Merck is headquartered, and New York, where Chenault’s former employer American Express is based.

New Jersey just enacted early in-person voting this week, although the state already had early in-person absentee voting. And New York, unlike the majority of states including Georgia, does not have no-excuse absentee voting, Blount noted. “We look forward to Mr. Frazier and Mr. Chenault both advocating for their states to join Georgia in increasing voter access and securing the ballot box,” she said in an email.