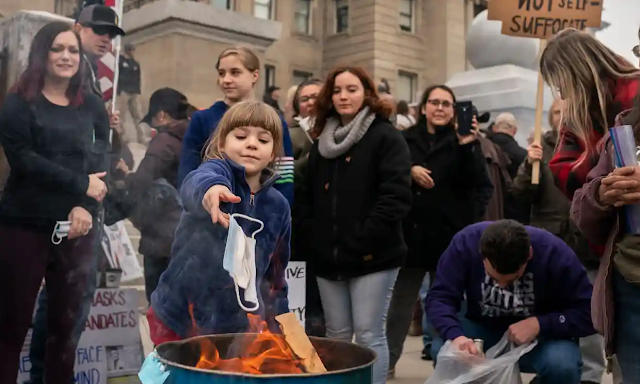 "A least 100 people gathered in front of the Idaho state capitol on Saturday to burn masks, in a protest against measures to limit infections and deaths caused by the coronavirus pandemic.

Some groups, predominantly rightwing, say mask mandates are a restriction of their freedoms. Health experts say they help slow the spread of the disease.

More than 170,000 Idaho residents have been infected with the virus in the last year and nearly 1,900 have died. Johns Hopkins University puts the US case count at nearly 29m and the death toll at more than 523,000.

Videos posted on social media on Saturday showed adults in Boise encouraging children to toss masks into a fire. One child could be heard to say: “Here fire, you hungry? Here’s another mask.”

The Republican governor of Idaho, Brad Little, has never issued a statewide mask mandate but seven counties and 11 cities have such mandates in place.

Visitors to the capitol in Boise are asked to wear masks but they are not required and few Republican lawmakers wear them. A Republican on Wednesday introduced legislation to prohibit mask mandates.

Other Republican-led states have moved to end mandates and reopen their economies, citing decreasing case counts and increased availability of vaccines – an effort driven by the federal government.

Amid warnings of a possible fourth surge of cases if public health measures are dropped too early, Joe Biden this week accused such Republican leaders of “neanderthal thinking”. Republicans protested.

In Boise, a man identified as Darr Moon, an organizer of the Saturday event, told the reporter Sergio Olmos in footage posted to Twitter: “I think people need to realize that we’re standing here today to rein back government, to reestablish our republican form of government, government that has balance between the branches.

“And we’re kind of that belief that we need well-defined government, certain boundaries and that’s not what we have today.”

As the event took place, senators in Washington were passing a $1.9tn stimulus and relief package meant to bolster the effort against the pandemic and revive the economy it has battered. Joe Biden hailed the development and said he expected to sign the bill into law next week.

Moon also said the Boise event was representative of a “widespread grassroots uprising”.

Olmos also filmed a protester burning a mask with “Biden sucks” written on it, another burning a picture of “Sleepy Joe”, and others refusing a police request to put out a fire.