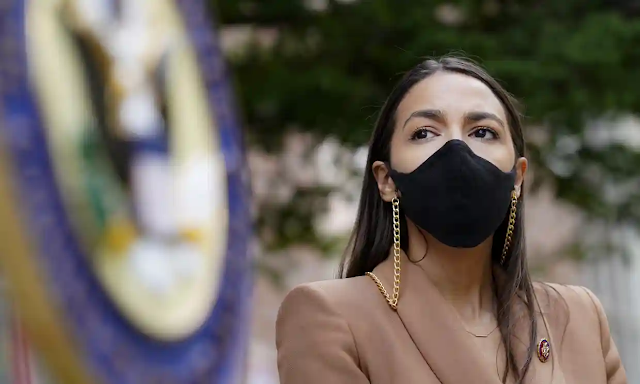 "US man charged with threatening to 'assassinate' Alexandria Ocasio-Cortez
Alexandria Ocasio-Cortez in August. Donald Trump was impeached for inciting the Capitol attack and will face trial in the Senate. Photograph: John Minchillo/AP
Alexandria Ocasio-Cortez in August. Donald Trump was impeached for inciting the Capitol attack and will face trial in the Senate. Photograph: John Minchillo/AP
A Texas man who participated in the attack on the US Capitol on 6 January has been charged with threatening to “assassinate” the New York Democratic representative Alexandria Ocasio-Cortez.
Garret Miller of Texas faces five criminal charges arising from his participation in the pro-Trump riot, including “knowingly entering or remaining in any restricted buildings or grounds without lawful authority” and making threats.
According to court documents, he allegedly tweeted: “Assassinate AOC.”
He is also charged with violent entry and disorderly conduct on Capitol grounds, obstructing or impeding any official proceeding, and certain acts during civil disorder.
Asked for comment on Saturday, Miller’s lawyer, Clint Broden, said in an email: “The charges are based on an inappropriate comment made in the heat of the moment on Congresswoman Ocasio-Cortez’s Twitter feed.”
On Friday night, Ocasio-Cortez, a progressive Democratic congresswoman from New York, responded to news that Miller had been arrested, and had posted a selfie to Facebook, writing that he “just wanted to incriminate myself a little lol”.
Ocasio-Cortez tweeted: “Well, you did!”
She added: “On one hand you have to laugh, and on the other know that the reason [the Capitol rioters] were this brazen is because they thought they were going to succeed.”
Miller is also alleged to have said an officer who shot and killed a Trump supporter inside the Capitol “deserves to die” and would not “survive long” because it’s “huntin[g] season”.
Broden said: “Mr Miller regrets the actions he took in a misguided effort to show his support for former President Trump. He has the full support of his family and has always been a law abiding citizen.
“His social media comments reflect very ill-considered political hyperbole in very divided times and will certainly not be repeated in the future. He looks forward to putting all of this behind him.”
The criminal complaint filed in Washington DC federal court lists example after example of social media posts apparently placing Miller on Capitol grounds, participating in the riot.
Several hours after the insurrection, authorities allege, Twitter user @garretamiller publicly posted a video from within the Capitol captioned: “From inside congress”.
“In examining Miller’s Facebook account, there are many posts relating to his involvement in criminal activities at the Capitol,” officials wrote.
On 2 January, Miller allegedly wrote on Facebook: “I am about to drive across the country for this trump shit. On Monday … Some crazy shit going to happen this week. Dollar might collapse … civil war could start … not sure what to do in DC.”
On 3 January, Miller allegedly said he was bringing to Washington “a grappling hook and rope and a level-3 vest. Helmets mouth guard and bump cap”. The last time he was in Washington for a pro-Trump rally, Miller allegedly added, he “had a lot of guns” with him.
Miller also seems to have sought to set the record straight about participants in the riot. When someone wrote on Twitter that “the people storming The Capitol are not Patriots. They are PAID INFILTRATORS”, Miller allegedly responded: “Nah we stormed it. We where [sic] gentle. We where [sic] unarmed. We knew what had to be done.”
In a 15 January Facebook chat, Miller allegedly wrote that he was “happy to make death threats so I been just off the rails tonight lol” and was “happy to be banned now [from Twitter]”. Asked if police knew his name, he allegedly wrote: “[I]t might be time for me to … Be hard to locate.”
A bail hearing was scheduled for Monday.
The Washington Post, meanwhile, reported that the FBI and Department of Justice were considering not charging some of the hundreds of people arrested over the riot.
It was “a politically loaded proposition”, the paper said, “but one alert to the practical concern that hundreds of such cases could swamp the local courthouse”.
Donald Trump was impeached for inciting the Capitol attack. He will face trial in the Senate."
US man charged with threatening to 'assassinate' Alexandria Ocasio-Cortez | US Capitol breach | The Guardian
Posted by John H Armwood II at 8:40 PM