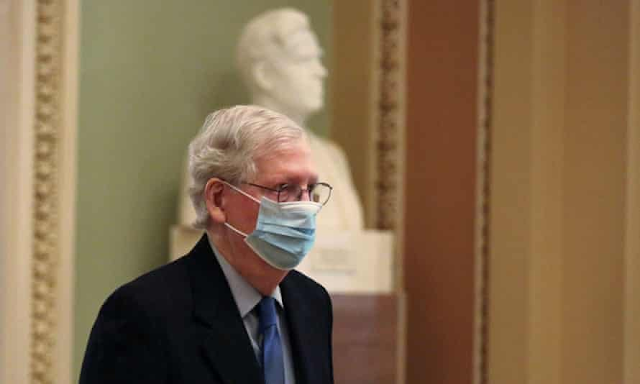 "By Daniel Strausstheguardian.com4 min
For Mitch McConnell, the top Republican in the Senate, the first few days of Joe Biden’s presidency has not been about fighting the new Democratic majority in government, it’s been about gaming out how much power he now has.
McConnell, the leader of Senate Republicans for over a decade, now finds himself in the position every caucus leader dreads: out of power in the chamber, in charge of a somewhat unruly bunch of politicians, and under pressure over how to handle the impeachment of the last Republican president.
Just as McConnell became the Senate minority leader last week, he was confronted with two pressing concerns: retaining power through early negotiations with counterpart Chuck Schumer, the new Senate majority leader, and figuring out how to proceed on the impeachment trial of Donald Trump, which is set to begin in early February.
It’s a unique predicament for a senator regarded by Republicans as a strategic mastermind of Senate procedure and one reviled by Democrats for obstructionism.
Democrats often point to McConnell’s vow to make then-president Barack Obama a “one term president” as the perfect encapsulation of him. Republicans like to highlight that McConnell was able to usher through over 230 conservative judges onto the federal judiciary. And all the while the ultra-savvy Kentucky Republican has staved off criticism from the insurrectionist elements of his party – like Senator Ted Cruz of Texas.
McConnell, now once again in the minority, will have to deal with anti-establishment colleagues like Cruz and Missouri senator Josh Hawley. Those two senators led the challenge to certifying Joe Biden’s victory that resulted in a mob invading Capitol Hill. McConnell has butted heads with Cruz and allies before and emerged victorious while effectively isolating the Texas senator as punishment. As his caucus knows, losing in a fight with McConnell has its consequences.
But the situation now is different. McConnell has been in ongoing negotiations with Schumer over rules for the Senate over the next two years and added protections for the filibuster, one of the most valuable and powerful stalling tools for the party in the minority in the Senate. The filibuster is a legislative maneuver that allows any senator to delay or even block legislation through ongoing debate unless 60 senators agree to end debate. The 60 senator threshold, especially in a partisan and evenly split Senate makes it especially difficult to advance legislation.
He and other Republicans are weighing how to proceed on impeaching Trump. McConnell and other Republican leaders were horrified both by the certification challenge and it further undermined the already strained ties between McConnell and Trump. Privately, McConnell has indicated that he’s at least more open to a Trump impeachment conviction which could facilitate barring him from becoming president again.
“The mob was fed lies. They were provoked by the president and other powerful people,” McConnell said earlier this week.
But it’s unclear whether there’s the seventeen votes needed among Republicans for the Senate to convict Trump and how fraught with peril it might be for Republicans who do support impeachment. Some are already lobbying McConnell to move forward, even as the few House Republicans who supported impeachment in their chamber face primary challenges and growing blowback.
But for McConnell, the priority is the Senate as an institution. McConnell wants assurances from Democrats that the filibuster will be protected.
“I think that it’s necessary and it protects both parties,” said Ashlee Rich Stephenson, the political director for the Chamber of Commerce. “And we’re supportive of that.”
He has made this argument openly and in internal negotiations with Schumer.
“The legislative filibuster is a crucial part of the Senate, leaders like President Biden himself have long defended it,” McConnell said during a speech on the Senate floor on Thursday.
McConnell is essentially on the defensive now. He is not in total control of the Senate rules and has to partially rely on the threat of the filibuster to fight for Republican priorities. It’s a reality McConnell hasn’t had to deal with for years.
But McConnell enters his new role as minority leader with a relatively strong relationship with Joe Bidenl. Aides to both lawmakers note their long history together from when Biden was also a senator. There are indications that they are in closer collegial contact than is publicly known.
But even in the minority Republicans stress that McConnell is retaining two signature traits. He is an institutionalist, they say, which is partially what spurred him to criticize the blame Trump after rioters invaded the Capitol.
“Everybody who’s spent anytime watching his career knows that at the end of the day he’s an institutionalist. In the darkest days of the post-election period the institutions did their jobs,” said a former top McConnell aide. “The courts did their job, even the Trump appointed judges and he made doggone sure that the Senate is going to do its job. Of course when the riots happened he made sure that they’re going to come back and finish the job. And I think that he’s viewing it through that lens here. If you can’t say that leaving an armed insurrection against one body – one branch of government it is an impeachable offense, shame on you.”
Scott Reed, a former senior political strategist for the US Chamber of Commerce, said McConnell is focused on the next two election cycles rather than the next two days.
“He plays the long game,” Reed said. “He does not play the short next few months game at all. He’s playing ’22 and ’24 today.”
That means, Reed added, that McConnell will “hold strongest on the thing he cares about the most which is the filibuster rule. Because that’s how you stop bad stuff from happening. That will drive his thinking.”
Mitch McConnell 'plays the long game' to retain some power as it slips away | US Senate | The Guardian
Posted by John H Armwood II at 8:06 AM