Opinion | A Deadly Lack of Leadership - The New York Times 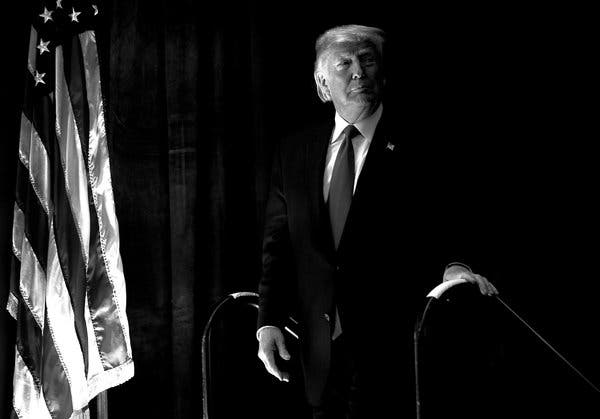 "The president congratulates himself.

This is what it looks like when a crisis of leadership makes its way into our health and our homes, when lack of prudence induces panic, when the president himself cannot be trusted.

The coronavirus pandemic changes the view of Donald Trump’s incompetence, because this time it is intimate. This time what’s at stake isn’t abstract in the mind of the average American, like constitutional law or international relations. It is not far away, like families at the border or Nazis in Charlottesville. It is not about carnal and craven acts that take place between two people or are committed by one against another, like assaulting women or paying them off.

This crisis is transcendent, which makes Trump’s disastrous approach to dealing with it all the more transparent.

The Trump administration finally appears to be taking this crisis seriously, after months of Trump himself trivializing and politicizing it. The virus was never a hoax or a media creation or a flash in the pan that would affect few and miraculously vanish.

But Trump, the supposed leader of the country, wasted precious time — weeks and weeks — telling the American public just that, while not taking the drastic measures that the government is now, belatedly, taking.

That puts lives in danger, and surely, in the end, will have cost lives.

America needs a leader; it has a lout.

Trump has always been so obsessed with dodging blame and claiming glory that he has consistently attempted to bend the truth to his better. But that didn’t work in this case. His lies held no sway with a virus.

Trump continues to brag about the relatively low number of diagnosed cases of the virus and deaths from it in America, but that data is corrupted by his incompetence. We have absolutely no idea how many people have the virus in America, or how many had it and have recovered, because there has been an outrageous and embarrassing dearth of testing in this country.

Trump liked the low numbers and by dragging his feet, he kept them low.

Even when cooler heads and bigger brains prevailed, and Trump stopped trying to wish the virus away and started the work of driving it away, he was hapless, dishonest and dissembling.

His address to the nation on Wednesday not only failed to address the core issues of how testing would be expanded and the virus truly brought under control, it was also plagued by errors that had to be corrected.

Finally, he held a news conference in the Rose Garden on Friday in which he announced a partnership between the public and private sectors that would expand testing and other measures that seem poised to actually make an impact on the spread of the virus.

But, as usual, in Trump’s desperate need for self-aggrandizement, he oversold. As The Washington Post reported Saturday, “Representatives from CVS, Target, Walgreens, Walmart and other retailers said after Trump’s announcement that they still did not yet know exactly how the tests would be administered or other basic details, including when or where they would begin.”

In fact, during the news conference, Trump repeatedly lied. He boasted about how great his response had been while shirking any responsibility for how truly awful it had been.

America watched a churlish child stand among serious leaders, corporate leaders and scientific ones, trying to appear in command, but continuously exposing himself as small and shallow.

The constant attempt to shift blame and accept none is a serious character flaw and the mark of a coward. The constant shadow boxing with the ghost of President Barack Obama is embarrassingly consuming. And his need to be endlessly exalted is disturbing.

Over the course of this crisis, we have seen a president more concerned with his own image and electoral prospects than with the safety and security of the American people.

Before saying he would be tested, he insisted he didn’t really need to — even after coming into contact with people who would test positive for the virus. Meanwhile, average Americans were exasperatedly calling their doctors, unable to be tested.

(He finally got tested, and the results were negative.)

Presidents should lead by example. They should model behavior and inspire confidence. Trump failed on all counts, because … he is himself.

Leading a cult is not the same as leading a country. Presidential leadership is born of character — morality, honesty, courage, stability — traits foreign to Trump, traits to which he is actively hostile.

Trump’s thoroughly inept handling of this crisis will not pass from the American memory easily. Fear and panic will help etch this one into the psyche. This will leave a scar."

Opinion | A Deadly Lack of Leadership - The New York Times
Posted by John H Armwood II at 7:44 AM