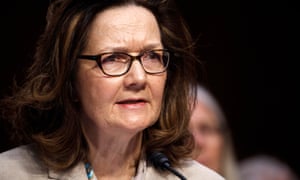 "The White House is preventing the CIA director, Gina Haspel, or any other intelligence official from briefing the Senate on the murder of Saudi dissident and Washington Post columnist, Jamal Khashoggi.

The secretary of state, Mike Pompeo, and the defence secretary, James Mattis, are due to give a briefing on US relations with Saudi Arabia to the entire Senate behind closed doors on Wednesday, ahead of a vote that could cut off US support for Riyadh’s military campaign in Yemen.

On a national security issue of such importance, it would be customary for a senior intelligence official to take part. On this occasion, the absence of the intelligence community is all the more glaring, as Haspel travelled to Istanbul to hear audio tapes of Khashoggi’s murder provided by Turkish intelligence, and then briefed Donald Trump.

Officials made it clear that the decision for Haspel not to appear in front of the committee came from the White House.

According to multiple reports, the tapes and other intelligence material point clearly to Crown Prince Mohammed bin Salman as having ordered Khashoggi’s killing in the Saudi consulate in Istanbul on 2 October.

The US president has asserted, however, that the CIA report is inconclusive – a claim greeted with scepticism by many senators who expected to hear first-hand from Haspel on Wednesday on a brutal killing that appears to have help sway several senators against continuing military support to Riyadh for the war in Yemen."