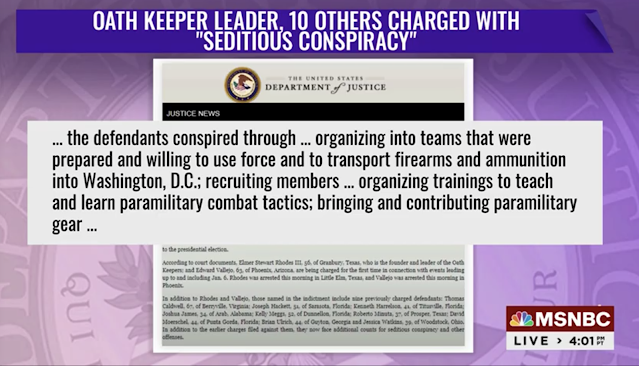 "The F.B.I. arrested Stewart Rhodes, the founder of the far-right militia, in a major step forward in the investigation into the attack on the Capitol by supporters of Donald J. Trump.
Jan. 13, 2022Updated 5:35 p.m. ET

Stewart Rhodes, the leader and founder of the far-right Oath Keepers militia, was arrested on Thursday and charged along with 10 others with seditious conspiracy over what prosecutors said was their wide-ranging plot to storm the Capitol on Jan. 6 last year and disrupt the certification of Joseph R. Biden Jr.’s electoral victory.

The arrest of Mr. Rhodes, 56, was a major development in the sprawling investigation of the Capitol attack. He and the other Oath Keepers are the first to be charged with sedition among the more than 700 people accused so far of taking part in the assault.

Mr. Rhodes was arrested shortly before 1 p.m. at his home in Granbury, Texas, his lawyer, Jonathon Moseley, said.

Beginning only days after the 2020 election, Mr. Rhodes oversaw a seditious plot “to oppose the lawful transfer of presidential power by force,” prosecutors said. Some members of the Oath Keepers under his command broke into the Capitol in a military-style formation on Jan. 6 and went in search of Speaker Nancy Pelosi, the indictmentsaid. Others, it said, were stationed in a hotel in Alexandria, Va., as an armed “quick reaction force,” ready to rush into Washington if needed.

In addition to Mr. Rhodes, prosectors charged Edward Vallejo, 63, of Phoenix, for the first time in connection with Jan. 6. The nine other militia members named in the indictment had all previously been charged, although not with sedition. Mr. Vallejo was part of the quick reaction force teams that the militia had deployed, which were equipped with firearms and other tactical equipment in case Mr. Rhodes called upon them to support the plot, prosecutors said. The teams included Oath Keepers from North Carolina, Florida and Arizona.

The Justice Department has brought a variety of charges against those being prosecuted in connection with the Capitol riot; it has charged about 275 people with obstructing Congress’s duty to certify the 2020 presidential vote count, for example. But it had not previously brought a sedition charge, with the legal weight and political overtones it carries.

The charge of seditious conspiracy, which can be difficult to prove, requires prosecutors to show that at least two people agreed to use force to overthrow government authority or delay the execution of a U.S. law. It carries a maximum of sentence of 20 years in prison.

The last time federal prosecutors brought a sedition case was in 2010, when they accused members of a Michigan militia of plotting to provoke an armed conflict with the government. They were ultimately acquitted.

Mr. Rhodes, a former Army paratrooper who went on to earn a law degree at Yale, had been under investigation for his role in the riot since at least last spring when, against the advice of his lawyer, he sat down with F.B.I. agents for an interview in Texas. He was at the Capitol on Jan. 6, communicating by cellphone and a chat app with members of his team, many of whom went into the building. But there is no evidence that he entered the Capitol.

Over 48 pages, the new indictment painted a detailed picture of Mr. Rhodes’s activities starting only days after the 2020 election. Just two days after Election Day, Mr. Rhodes told several members of his group to refuse to accept Mr. Biden’s victory, the indictment said.

“We aren’t getting through this without a civil war,” he wrote on the encrypted chat app Signal. “Too late for that. Prepare your mind, body, spirit.”

Sign Up for On Politics  A guide to the political news cycle, cutting through the spin and delivering clarity from the chaos.

One month later, after plotting with underlings in several states, the indictment said, Mr. Rhodes told members of his group on another encrypted Signal channel that they should use violence to stop Mr. Biden from taking office. “It will be a bloody and desperate fight,” he wrote. “We are going to have a fight. That can’t be avoided.”

Through their lawyers, members of the Oath Keepers who are already facing charges have said they converged on Washington just before Jan. 6 not to attack the Capitol, but instead as part of a security detail hired to protect conservative celebrities like Roger J. Stone Jr., a longtime ally of former President Donald J. Trump.

In an interview with The New York Times last summer, Mr. Rhodes expressed frustration that several members of his group had “gone off mission” by entering the Capitol on Jan. 6, quickly adding, “There were zero instructions from me or leadership to do so.”

But at least four Oath Keepers who were at the Capitol that day and are cooperating with the government have sworn in court papers that the group intended to breach the building with the goal of obstructing the final certification of the Electoral College vote.

Mr. Rhodes has also attracted the attention of the House select committee investigating Jan. 6, which issued him a subpoena in November. In a letter at the time, House investigators noted that Mr. Rhodes had taken part in several events intended to question the integrity of the 2020 presidential election.

On Election Day, the letter said, Mr. Rhodes said that an “honest” count of the votes could only result in a victory for Mr. Trump and called on members of his group to “stock up on ammo” and prepare for a “full-on war in the streets.”

Key Figures in the Jan. 6 Inquiry

Mark Meadows. Mr. Trump’s chief of staff, who initially provided the panel with a trove of documents that showed the extent of his role in the efforts to overturn the election, is now refusing to cooperate. The House voted to recommend holding Mr. Meadows in criminal contempt of Congress.

Scott Perry and Jim Jordan. The Republican representatives of Pennsylvania and Ohio are among a group of G.O.P. congressmen who were deeply involved in efforts to overturn the election. Both Mr. Perry and Mr. Jordan have refused to cooperate with the panel.

John Eastman. The lawyer has been the subject of intense scrutiny since writing a memo that laid out how Mr. Trump could stay in power. Mr. Eastman was present at a meeting of Trump allies at the Willard Hotel that has become a prime focus of the panel.

With his distinctive black eye patch — the result of a gun accident — Mr. Rhodes has been a fixture on the far right almost from the day in 2009 that he announced the creation of the Oath Keepers at a rally in Lexington, Mass., the site of a famous Revolutionary War battle.

At the event, Mr. Rhodes laid out an antigovernment platform for the current and former law enforcement and military personnel who joined his group, saying that his plan was for members to disobey certain illegal orders from officials and instead to uphold their oath to the Constitution.

During the Obama administration, the Oath Keepers repeatedly inserted themselves into prominent public conflicts, often playing the role of heavily armed vigilantes. In 2014, for instance, they turned up at a cattle ranch in Nevada after its owner, Cliven Bundy, engaged in an armed standoff with federal land management officials. That same year, members of the group went to Ferguson, Mo., on a self-appointed mission to protect local businesses from riots prompted by the death of Michael Brown, a Black man who was shot by the police.

After Mr. Trump took office, Mr. Rhodes and the Oath Keepers pivoted away from their antigovernment views and appeared to embrace the new spirit of nationalism and suspicions of a deep-state conspiracy that had taken root among some of the president’s supporters. Like other far-right groups such as the Proud Boys, the Oath Keepers also opposed — often physically — the Black Lives Matter protests that erupted in 2020 in the wake of the murder of George Floyd by the police in Minneapolis.

According to the indictment, Mr. Rhodes became more serious about stopping Mr. Biden from assuming office in early January, the same month he began spending thousands of dollars on military-grade firearms, ammunition and other tactical gear. Prosecutors have not accused him of bringing any weapons to Washington on Jan. 6, but they said that Mr. Vallejo and other members of the armed reaction force outside the city discussed the possibility of “armed conflict” and “guerrilla war.”

Mr. Rhodes seemed to relish the chaos at the Capitol on Jan. 6, prosecutors said. The indictment notes that shortly after 3 p.m. that day, a member of his Signal group chat sent him a message saying that members of Congress had been “given gas masks and are trying to get out.” Mr. Rhodes is said to have responded with a dismissive obscenity.

That evening, prosecutors said, Mr. Rhodes, Mr. Vallejo and other Oath Keepers met at an Olive Garden restaurant in Vienna, Va., to “celebrate their attack on the Capitol and discuss next steps.”

“Thousands of ticked off patriots spontaneously marched on the Capitol,” Mr. Rhodes wrote that night on his Signal group chat. “You ain’t seen nothing yet.”