Opinion | Before Rosa Parks, Claudette Colvin refused to give up her seat on a bus. She’s still on probation. - The Washington Post

Opinion: Before Rosa Parks, Claudette Colvin refused to give up her seat on a bus. She’s still on probation. 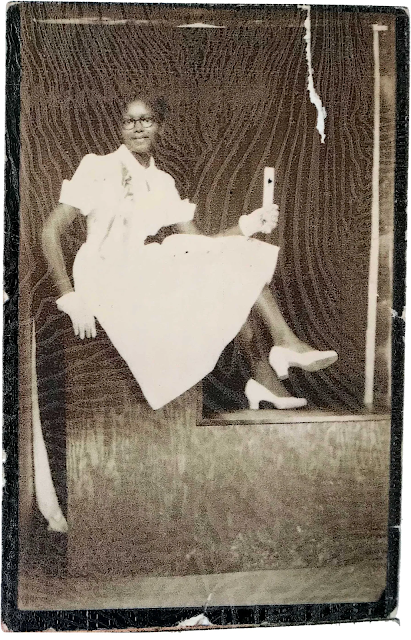 "Claudette Colvin as a teenager.
By Michele L. Norris
Columnist
Today at 3:05 p.m. EDT
Claudette Colvin was 15 years old when she was arrested in Montgomery, Ala., and placed on indefinite probation, after refusing to vacate her seat on a bus so a young White woman could sit down.
This was March 1955 — nine months before Rosa Parks was arrested for violating Alabama’s racial segregation laws after refusing to give up her seat to a White man, an act that sparked the year-long Montgomery Bus Boycott. Parks, who died in 2005, went on to become an icon, widely celebrated as the “mother of the civil rights movement.”
What about Colvin? Though she was one of four female plaintiffs in Browder v. Gayle, the Supreme Court case that overturned Montgomery’s bus segregation laws, her role in challenging the Jim Crow system has been largely overshadowed. What’s worse, Colvin, who is now 82, was never taken off probation.
That needs to change — and perhaps now it will. Today, Colvin goes back to Montgomery to petition for her record to be cleared. She is also, in a carefully detailed 30-point affidavit, addressing something else: the fact that her story was largely expunged because civil rights leaders didn’t see her as an appropriate symbol for the movement.
Colvin got pregnant not long after her arrest. And she was defiant. She was also charged with a felony for assaulting a police officer who said she had kicked and scratched him.
I interviewed Colvin in March 2020, and offstage she told me she believed there was another reason her story was shunted aside. “Rosa Parks had the right background and the right skin color,” she said. Colvin, whose skin is a beautiful shade of chocolate, said the bias still stings, but she let go of anger a long time ago. “We were all seeking one thing,” she said. “Justice.”
Now the gray-haired Colvin seeks delayed justice, addressing the Juvenile Court for Montgomery County. She’ll be accompanied by the 90-year-old Fred Gray, the civil rights lawyer who represented her back in 1956.
11-year-old Claudette Colvin, at right, with her father, Thomas Gadson, her mother, Mary Jane Gadson, and three of her sisters, Delphine, Joann and Mary Ellen. (Family photo)
For a woman silenced so many decades ago, it is fitting to let her tell her own story now. She does so in the following excerpts from her affidavit, beginning with the day she got out of school early and walked downtown to catch a bus home.
“When the bus arrived, I paid my fare and I sat near the front of the colored section. I did not violate the segregation law.”
“But a young White woman got on the bus and there were no seats left in the section designated for White people. The driver told my friends and I that we would all have to clear out of our row so the White woman could sit. All four of us were going to have to stand up so she would have the whole row to herself. …”
“My three seatmates got up, but I felt glued to the seat. People think it was just about a seat on a bus but it was about so much more than that. It was about my constitutional rights. It was about history. It was about injustices that I personally witnessed every day.”
Colvin explains that she feared for her life.
“I was dragged off the bus, handcuffed and taken to the jail. I remember the sound of the key turning in the lock. I remember there was no mattress on the cot, but I curled up and tried to sleep. …”
“I sat in jail and thought about heaven and hell. …”
“Eventually, I was sentenced to probation pending good behavior. I cried when that happened.”
Colvin did behave well and tried to move on, earning a GED. Life in Alabama was hard, though, because Black and White residents shunned her as a troublemaker.
“I was afraid to work as a domestic servant because you never knew who might be in the Klan. … So I worked at restaurants. And over and over again, I was fired from those jobs after my bosses found out that I was ‘that girl’ who had sat on the bus."
Around age 20, Colvin was a single mother with two sons. She says she left Montgomery because she couldn’t find a job.
“I moved to the Bronx and found a community of Jamaican women. We worked as domestics, but we unionized with 1199. I’m proud of that.”
Summers, she returned to Alabama to visit family.
“I know they were terrified every time I came home because I was on probation from the court. … Every time [they] saw a police car in the neighborhood, they thought the police were there to get me.”
Colvin lived in New York for decades.
“Things were better and safer for me there. People did not know me for what I did. …”
“I am an old woman now. Having my records expunged will mean something to my grandchildren and great-grandchildren. And it will mean something for other Black children.”
Clearing Colvin’s record — in a moment when so many people are trying to expunge the teaching of America’s troubling racial history — will also mean something significant for the city of Montgomery, the state of Alabama and the entire United States of America.
Civil rights activist Claudette Colvin speaks with the author, Michele L. Norris, during the Embrace Ambition Summit at Lincoln Center in New York City on March 5, 2020. (Craig Barritt/Getty Images for Tory Burch Foun)"
Opinion | Before Rosa Parks, Claudette Colvin refused to give up her seat on a bus. She’s still on probation. - The Washington Post
Posted by John H Armwood II at 9:56 PM