Many People Are Blind To Juan William's Bigotry. It Is Amazing! 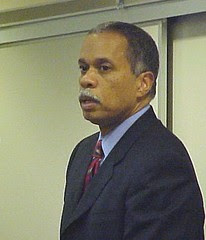 Image by Fairfax County Public Library via FlickrThese are the words that Juan Williams uttered which got him into trouble. These are the words which caused NPR to fire him.
"I mean, look, Bill, I’m not a bigot. You know the kind of books I’ve written about the civil rights movement in this country. But when I get on the plane, I got to tell you, if I see people who are in Muslim garb and I think, you know, they are identifying themselves first and foremost as Muslims, I get worried. I get nervous."


What is wrong with this?  Here is the problem;  "if I see people who are in Muslim garb and I think, you know, they are identifying themselves first and foremost as Muslims".  This is an incredibly bigoted remark.  This is America.  We are allowed to express our religion in the way we dress.  We supposedly do not judge people by their religious beliefs. This is not France which has outlawed the Muslim burka. Catholic priests and nuns wear distinctive, religious garb, Hassidic Jews wear black coats and hats.  This is America.  If you see something wrong with someone identifying themselves first and foremost as Muslims by their dress and you do not see a problem with believers of other faiths identifying themselves first and formost as a Catholic, or a Jew or a Buddhist you are a bigot and your values are contrary to American values.  Don't feel bad if you don't get it.  A lot of people don't get it.  MSNBC's Hardball Host Chris Matthews, who can be often inexplicably obtuse when it comes to issues of ethnicity, gender and race does not get it.  Eugene Robinson of The Washington Post did not get it either in his discussion with Chris Matthews on Hardball.  Thank goodness however NPR got it.  Rachel  Maddow, the incredibly bright MSNBC host of the Rachel Maddow Show gets it.  Fox News got it. That's why they gave Juan Williams a two million dollar new contract the day after his bigoted statement.  Bigotry sells, especially in hard economic times like we are now experiencing.  Fox News sells hate, anger and bigotry, not news.  It's time for America to understand that our country is multi-cultural.  People who claim Islam as their religion do evil things like 9/11.  That does make all Muslims evil.  People who claim Christianity as their religion do evil things like committing mass murder and genocide in Bosnia during the 1990s.  That does not make all Christians evil.  It time for us all to wake up and smell the coffee.  People do both good and evil.  It not a "religion" thing.  It's a "people" thing.